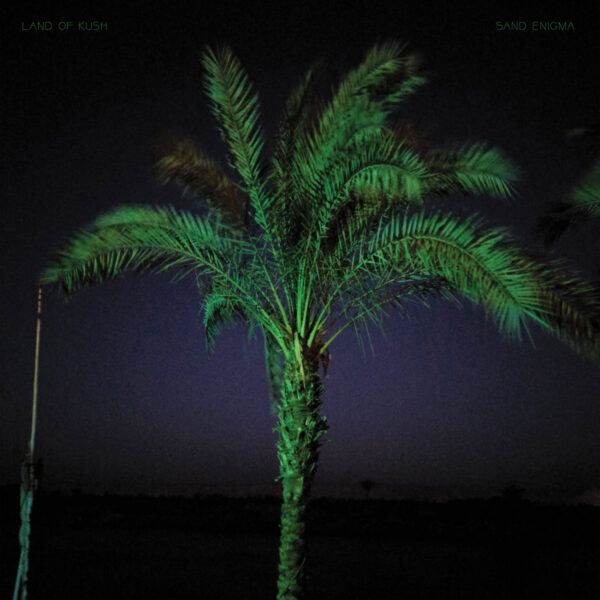 As long as I’ve been writing for The Sound Projector, going back almost 20 years, I’ve always been aware of Egyptian-Canadian artist Sam Shalabi’s ambitions to lead a band in the style of mid-20th century classic Middle Eastern orchestras playing fusions of modern Middle Eastern music (of the time) and Western music genres such as jazz and formal orchestral music. Starting with Shalabi Effect (whose self-titled double CD set I reviewed for TSP back in 2000) and continuing with current big-band project Land of Kush among others, Shalabi’s ensembles have always dived into various combinations of traditional and folk Middle Eastern music, jazz in its diverse forms (including improv) and rhythm-based electronics, with an emphasis on long instrumental improvisations and experimentation with unusual combinations of musical instruments and structures drawn from different cultural traditions. This recent release from Land of Kush, “Sand Enigma”, the collective’s fourth album, continues along that trajectory with no fewer than 24 musicians and singers willingly following Shalabi who, in his compositions and the arrangements he sets for his works, opens up paths in a bewildering soundscape of possibilities and potentials. The result is music that is joyful and passionate, curious and exhilarating in its exploration of new sonic and melodic potentials, sometimes very self-indulgent and perhaps too carried away by its joy and excitement, but always delighting in the musical traditions and the associated cultures it draws on.

Ideally this recording needs to be heard in its entirety in one sitting for that total immersion into a complex and layered multi-universe of music but I daresay the emphasis on many tracks that are short to medium-long in length (when it could have had fewer but longer pieces) may make the album something of an endurance test for most listeners unfamiliar with the individual musics that feature here. The most interesting and zestful parts of the album are the instrumental pieces (“Broken Maqams” in particular) where instruments from different musical traditions duet in exuberant and playful improvisations. While these parts can be very good, after a while the listener may start to wish for a greater range of emotion and mood, rather than constantly busy music that continually bounds along with little pause for breath or contemplation in a constant tourist-coach parade of different combinations of music styles and genres.

I find the greatest disappointment in a work like “Sand Enigma” is that the vocalists who appear on the album end up being drowned out by the music. Much of the singing doesn’t match the virtuosity and range of the musicians and the singers risk being left behind running out of breath and voice. Listening to a recording like this makes me realise just how unique a singer like Egypt’s Umm Kulthum, who dominated 20th-century classical Arab / Middle Eastern music for nearly a good half-century, was in her time: with a raw tone and a soaring voice, that lady could out-sing the roar of a sandstorm. By contrast, some singers on “Sand Enigma” seem too limited, too cool and too boxed in by the music, and only Maya Kuroki is able to hold her own with her quirky style of sometimes extreme singing. Even Elizabeth Anka Vajagic, a remarkable singer with a dark Gothic blues style, gets lost fighting against an orchestra (and sometimes fighting for breath) in full flight in later parts of the “Bone Mass” trilogy.

The last four tracks on the album bring in brief moments of contemplation amid virtuoso guitar playing (“Ana”) and a more traditional style of 20th-century classic Arab orchestral music (“Trema”) with breakouts of improvisation (“Dol”) but probably by this point listeners are too sand-blasted by what passed previously to appreciate the restraint, elegance and melodic minimalism in the music. Nadah El Shazly’s singing in this part of the album seems too smooth and a bit robotic, and either Kuroki or Vajagic should have been the vocalist here.

I do think far too much is being crammed into this sprawling album and some tracks or sets of tracks could have been hived off onto separate recordings and given more space to expand. Good pieces of music fight for the listener’s attention when they should have been allowed to shine on their own and expanded into longer works to reach their full development and enable total listener immersion. A lifetime’s worth of music is bound up in this recording and it feels rather overstretched. At times there seems to be too much emphasis on novelty and technical virtuosity and not enough on creating a distinct flavour or ambience. These kinds of recordings sometimes need to be more restrained in what they cover, no matter how much musicians want to cover, so as not to appear over-chaotic and confusing.