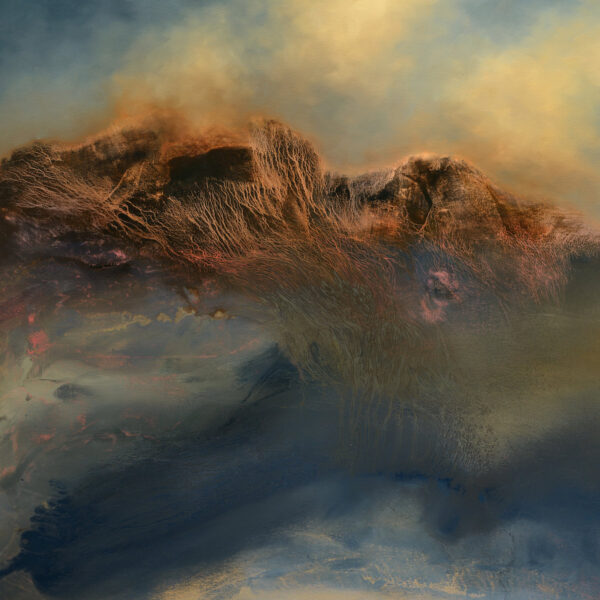 Recorded in the same sessions as the earlier 2019 release “Life Metal”, “Pyroclasts” is to be seen more as that album’s companion rather than its successor. “Pyroclasts” contains four tracks originally developed by Sunn0))) members (Greg Anderson and Stephen O’Malley) and their collaborators (Tos Nieuwenhuizen, Tim Midyett and Hildur Guðnadóttir) as part of a ritual of improvisation based on a single modal drone at the beginning and at the end of each day’s recording session which was recorded on two-inch analog tape and then mixed by Steve Albini. Whatever the purpose of the ritual was, whether it was serious in intent or it was the Sunn0))) men’s way of taking the mickey out of themselves and the Sunn0))) concept with its inclusion of ritual, or even if it was just the usual daily warm-up to get into the mood for “work”, the resulting music can be quite a surprise for long-time fans of the band: it is a very beautiful, atmospheric, even contemplative work of soundscape art. Perhaps without intending to or even trying, Anderson and O’Malley have made a very expansive work of minimalist drone with a surprising variety of mood and emotion, and all done without having to rely on vocalists or musicians working outside Sunn0)))’s original drone doom metal genre for their input because of their original music backgrounds.

Due to the limitations imposed in each day’s opening and closing rituals, the music on “Pyroclasts” contains limited instrumentation and little or no variety in composition so all four tracks can sound very similar on first listening. Depending on their prior experiences with Sunn0)))’s music or even other music, listeners can find passages in tracks that remind them of early Earth (or even Earth albums like “The Bees Made Honey in the Lion’s Skull”) or of earlier Sunn0))) recordings like “Flight of the Behemoth”. Subsequent hearings will reveal that the tracks in fact do have their distinct characteristics: third track “Ampliphædies (E)” for example is brighter than other tracks with shrieking guitar distortion overhead while another guitar noodles quietly below.

Of the four tracks, “Ascension (A)” seems most like the Sunn0))) we’re familiar with, with that air of grand majesty and triumph, however restrained it is in execution and emotion, and there are moments where it almost seems Anderson or SOMA might be itching to add a few drone riff flourishes. But to their credit, the two musicians remain disciplined, keep their egos in check and allow the music to evolve as it should at its pace. The reward comes in its own good time and reveals beauty, grace and richness in its build-up of tone, atmosphere and tension.

While the original intention for “Pyroclasts” was as a companion to “Life Metal”, to be heard with that album either following on or even interspersed with it, with a track from one album being followed with a track from the other album, and that second track followed by a track from the first album, and so on, I think with time “Pyroclasts” will be seen as an album in its own right, to be treated on its own merits. It really does feel like a complete work in itself, with soundscapes and worlds within awaiting discovery.