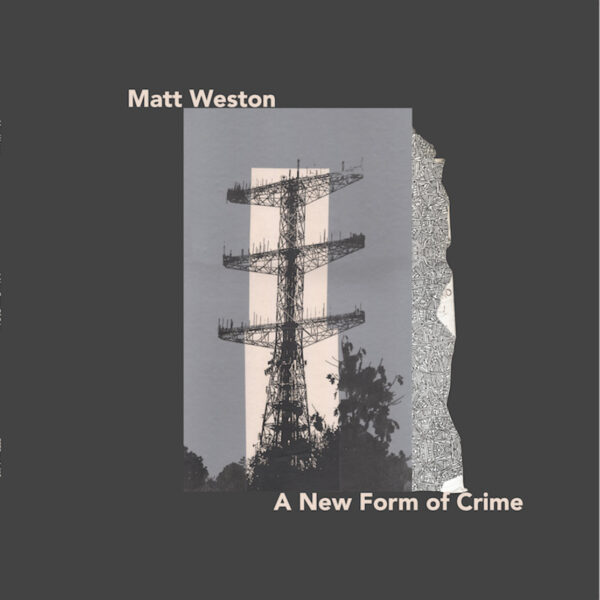 Another strong release from that maverick “Mr Antlers”, Matt Weston of New York. His A New Form of Crime (7272 MUSIC #012) may be a short slab of vinyl, coming in at just over 20 mins for the whole wazoo, but there’s not a trace of gristle in this slice of lean brisket. Continuing on from his previous whammerthon This Is Your Rosemont Horizon, which referred to a music and sports arena, all the recordings began life inside “concert and athletic buildings” which he accessed during down-time.

Weston has been making clandestine recordings in these spaces for about 16 years now, apparently without seeking explicit permission, and is proud of his “outlaw” credentials; one track here features a recording of him running away from a security guard, if we can believe the boast in the press notes. The bigger picture is that site-specific installations are a major feature of Weston’s work, along with his personalised notation methods and his complex graphical scores. The more I hear from him, the more I’m convinced he’s developing a private musical language, and that he alone understands fully what he’s doing; this isn’t to say the finished works are abstruse or inaccessible (far from it), but his methods would probably baffle a more effete indoors-y composer who’s living off a grant from wealthy sponsors. One instance of Weston’s half-mad, large-scaled ideas is realised here on the piece ‘We Want You To Panic’, which incorporates the sounds of cars being driven over a bridge in New York state; he gathered the drivers together, and directed their actions with flashlights. Using flashlights to start a showdown used to be part of drag-strip racing in the USA, I believe, or starting a game of “chicken” on some deserted country road. Weston sees this action as an extreme form of musical conduction, using the torch as his baton.

But in all this musing, we’re kind of overlooking the main point of this record, which is another delirious mix of bold percussion, tape editing and synthesised sounds, done with such electrifying passion and panache that it tends to restore your faith in contemporary music. He doesn’t suffer from the precious, self-regarding mannerisms of certain electro-acoustic composers who blight the racks with their over-engineered discs of digital blather. Matt Weston just roars it all out with conviction and verve, more informed by punk and hardcore than by academic study. On this particular outing, the rich textures and surfaces are really something to savour; he packs more incident into the picnic basket than the average bear, and never sits still for long enough to let the ants crawl into the zone. In short, there’s a lot to listen to and it’s all thrilling.

Might also add that with titles like ‘We Want You To Panic’ and ‘Under The Rifle Sights Of Snipers’, there might be some urban-terror paranoia subtext going on here as well, an impression which the cover art doesn’t do much to dispel. Given the way the world is heading under our insane, megalomaniacal populist rulers such as Trump and Johnson, you can’t really blame Weston for carrying the sense that we’re about to reap the massive whirlwind in Western society. From 8th August 2019.