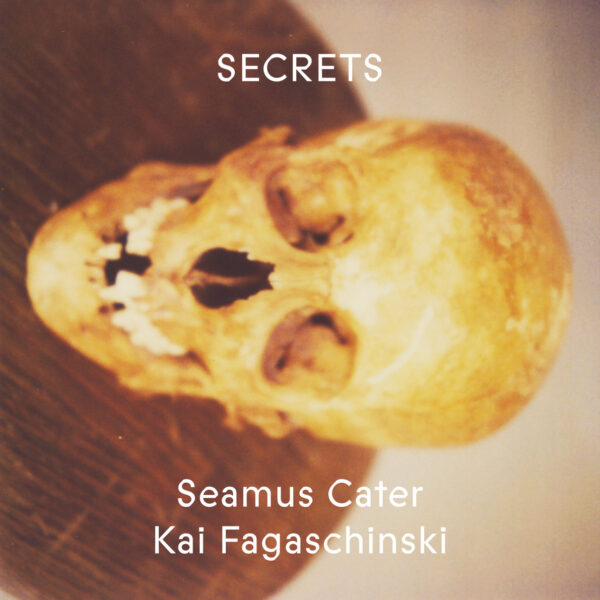 Extremely low-key record of songs and music is Secrets (NO LABEL NO NUMBER), performed by the duo of Seamus Cater and Kai Fagaschinski. Cater’s work has passed our way a few times before, aptly described as “plaintive, minimalist folk songs…[with] a stylised rustic charm” by Stuart Marshall, while I personally found his single Lunora Live very unsatisfying with its wispy vocals and skeletal music backdrop. Kai Fagaschinski is also part of The International Nothing, who made a guest appearance on Cater’s The Three Things You Can Hear album in 2016, and while Secrets may be their first published recording, there’s the strong impression they have worked together for some years before this, without advertising it to the world.

While Kai plays his beautifully restrained and winsome clarinet tones, Seamus Cater supplies depressed sighs from his old concertina and sketches tiny, barely-there tunes on the keys of a Fender Rhodes electric piano. He also sings, in his washed-out “I give up” voice, about such bleak matters as “the bones on which to hang a skin” and what happens in the aftermath of some sacrifical, ritual event (‘As We Destroyed The Band’). The lyrics are incredibly enigmatic, almost cryptic; the one about the blackout made the most connection with this listener, perhaps because I recently had a three-hour power cut in my own home and found it more disconcerting than I should have done. As Cater sings “blow the fuse, pull out the plug” in his dessicated “what’s the use of anything” voice, he comes close to touching on a theme which Scott Walker might have clutched to his own emaciated ribcage.

Well, besides the odd songs, we have some very good instrumental pieces exploring, quite slowly, the respective voices and intonations of these instruments in certain combinations; you can really feel the tremendous deliberation with which each musician sets about the task, leaving a lot of space for each other, and with few pre-determined ideas about where they may finish up. “A careful assembly sets them [the compositions] in motion and bestows them with unexpected purpose,” is how they would describe this process; it’s highly successful too, especially on the slightly longer pieces such as ‘The Philosopher’ and ‘Clarinet and Concertina’, where the same deep mystery of the song lyrics is expressed in purely musical forms. Each tune is full of unanswered questions, some of them quite strange and poignant.

We’re probably now some way from the worlds of jazz, improvisation, or even the folk music forms which I might once have used to tag the music of Seamus Cater, but all of this makes Secrets quite an intriguing and unusual record for me. “Boiling hot music and cheerful tunes from the Benny Goodman of the poor”, writes Kai in an attached hand-written note with the record, in a nicely self-deprecating manner. From 7th November 2019.