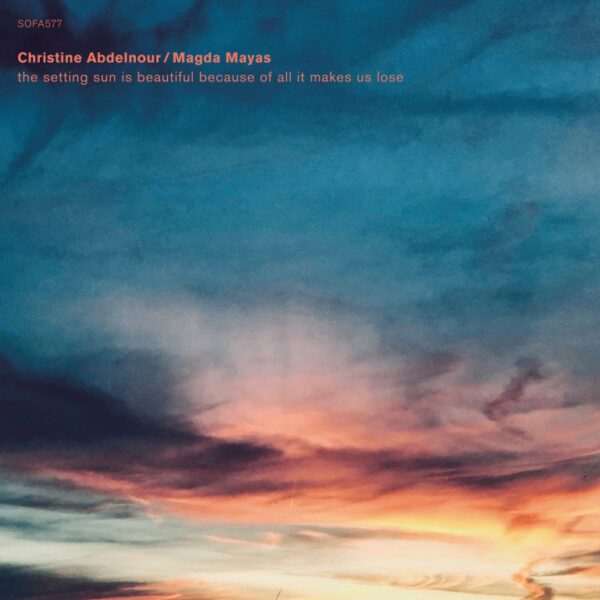 Excellent piano and saxophone record from Christine Abdelnour and Magda Mayas, who we heard in 2013 on the Myriad record they made for Unsounds. At that time Fontos Kontomichos noted these two Lebanese musicians were “influenced by spectral contemporary music” in their low-key, textural approach to improvisation, and I think this holds good for today’s record The Setting Sun is Beautiful Because Of All It Makes Us Lose (SOFA MUSIC SOFA577). Actually the album title is separate from the title of the single piece they perform here, 35 mins of ‘Thousand And One’ which they did at a concert in 2018 in Oslo.

‘Thousand And One’ most likely alludes to the Arabian Nights, that collection of folk tales woven together under a longer narrative umbrella, and one of the most significant legacies of middle eastern culture which I expect our two players regard as part of their personal heritage. One possible reading of the Arabian Nights is that Scheherazade is obliged to keep telling one story after another in order to postpone her own execution 1, and it might not be too fanciful to think that Abdelnour and Mayas are driven by a similar motivation. To put it more simply, the music just keeps pouring out of them, and by the midpoint of this record they’re creating remarkable density and complexity of form from just two instruments, and with very delicate playing – there is no need for over-emphasis, nor for loud volume, in this very respectful arrangement.

But there is plenty of detail and incident, and this is very far from being a “minimal” record or a document of music striving hard to conform to the diktats of reduced improvisation in all its contemporary forms. Rather, it’s fairer to say both players have evolved their own highly personal languages, and they have found that elusive sweet spot where they can successfully communicate with each other in a very productive manner. Recommended. From 10th December 2019.