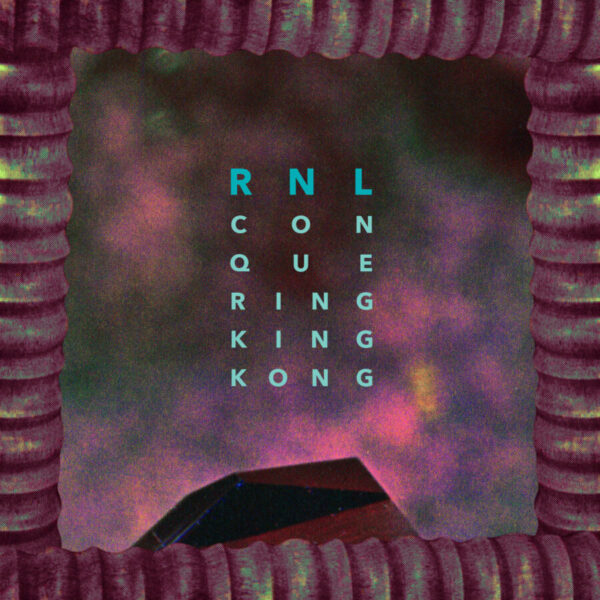 Must admit I’m struggling a bit with RNL‘s cassette, which is titled Conquering King Kong (VONCONFLON 01) – a title which could be read as having ambitions to scale the highest mountain and overcome all gigantic obstacles in one’s way. RNL might be Jesse Farber from Berlin and he describes RNL as an “openly collaborative project” rather than a solo act, although at time of writing the only evidence of a collaboration I can find is the CEPH item, where he teamed up with Jörg Simon. Farber is also a visual artist (collages, computer-generated art) and a writer, and sees RNL as a locus of multiple ideas and modes of expression, rather than just a musical outlet; there’s a zine of texts and images, where one way of unpacking the RNL acronym is revealed as “Robo-Noetic Living”, and we can expect other meanings as he publishes more issues in future. Alongside a picture of a robot with a human face, we read that the zine is described as “a periodic multimedia anthology with a variable philosophy.”

I’ve tried to find some grains of musical achievement on this tape, but so far it’s just coming up as rather ordinary process drone, mundane sounds, clunky beats, and electronic moves apparently programmed on autopilot. The two main events are long tracks called ‘Chopping Off Every Finger’ and ‘Eyeholes’, both of which are divided into shorter episodes with rather hermetic subtitles, such as ‘Phyllotaxis’ and ‘Autopoiesis’. This structuring is a good compositional device, and it allows RNL to vary the surface of his works, but I’m still looking hard for some meaningful content or an original idea in this cold music, without much success. The semi-anonymous and stern mood doesn’t do much to advance the creator’s cause; he won’t meet us halfway, and I get the feeling we’re expected to come to him, as he resides like an implacable cyborg on top of his stainless steel plinth.

For those who wish to delve deeper into the private world of Jesse Farber, you’ll be pleased to learn that he’s been active since the early 1990s, and is instigating a one-man reissue programme for his older cassette releases, to be issued by Vonconflon. From 6th January 2020.