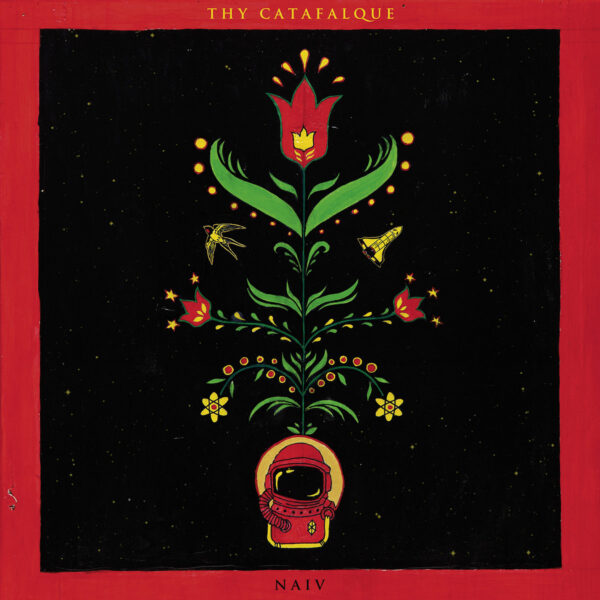 As its title suggests, “Naiv” is intended as a playful and fun work of black metal eclecticism drawing in Hungarian folk influences, electronica in its various forms (including synth pop), jazz, progressive rock, hard rock, post-rock, Middle Eastern sounds, Western classical music and contemporary pop music styles. This is the ninth album for Hungarian avantgarde BM band Thy Catafalque which currently is the solo project of Tamas Katai, one of the two original founders of the band back in 1998 who has been involved in various metal bands since the mid-1990s. Katai plays most instruments including percussion, guitars, bass and keyboards, and various guest musicians and vocalists also assist on all tracks, playing quite a number of instruments such as cello, oud, quena flute (a wooden flute used in Andean music), saxophone, trombone, viola and violin.

Each song is a different mix of styles and black metal is not necessarily the core style on all nine of them. Even when BM does appear, it tends to be very melodic and pop-friendly in orientation even at its toughest and most aggressive, and the folk music influences and singing (especially the singing by sweet-voiced Martina Veronika Horvath) have a tempering effect. Opening track “A bolyongas ideje” is a very strong, stinging Burzum-style blackened rock / pop song with a lot of crunch and plenty of folky synth-pop and siren vocals to balance out the crunchy stuff but it should not be taken to be the model for the rest of the album. From here on, nearly every song sounds like the first song of yet another album – well, I probably could have said all nine songs do but as the album continues, a lot of the early energy dissipates and I do get the impression with later tracks that they are treading water.

Second song “Tsitsushka” (the name is Hungarian for “Kitty cat”, though not perhaps in the way we understand “kitty cat”) is a bouncy jazz / pop / rock number with big brass synth backing and loads of cheesy synth melodies. Although we’re not meant to take the music seriously, I am starting to think this song, and others on the album like it, are seriously lacking in soul and feeling. Even songs that have some feeling tend to sound a little bit flat and kitschy in some way. The production may have something to do with this general feeling of flatness: the songs don’t have much depth and all the sounds and singing are very upfront and compete for the listener’s attention. Among other things, this means that a song like “Embersolyom” – which sounds a bit like the women from 1970s-era Swedish pop rockers ABBA fronting an industrial metal band – comes across as bludgeoning boredom rather than the interesting melodic folk / industrial metal fusion it should have been.

On and on the album goes, each track a pastiche of various styles all done and combined very tastefully and well, and yet each also sounds cartoonish and – I’ll be frank – not a little trashy. Maybe songs like “A valosag kazamatai” are meant to be ironic and knowing in the way they slam-dunk together deranged synth melodies, pounding hardcore thrash metal and vaguely Middle Eastern melodies into the one cracked-up melting pot and send the whole frothing mixture to boiling point. I certainly get that impression listening to these songs but I am not sure most other listeners will – I should think most people will simply be awed at the technical proficiency and not notice the demented nature of the music as it barrels along at efficient robotic speed. Somewhere along the line the playfulness and sheer innocent joy at crashing different music genres together that I suspect should be apparent throughout the entire recording got lost back at the beginning.

I’m rather glad when the album ends as the music near the end seemed to be retreating into the worst excesses of 1970s-era prog rock stompiness, Eurovision disco cheese and generic thrash metal. Call me a curmudgeon but after hearing this album at least three times for the purposes of review, I have to say this is one unpalatable melange of music I ever had to hear in 2020. I’m sure Katai tried hard with this album to capture a light-hearted spirit but it is buried under too many retro styles of music. Some discrimination and lopping of genres to make the album a bit more streamlined and less bombastic might have been in order. I am not sure this album really has much staying power after its novelty wears off and down the line it may end up a cult classic – but I fear for the wrong reasons.