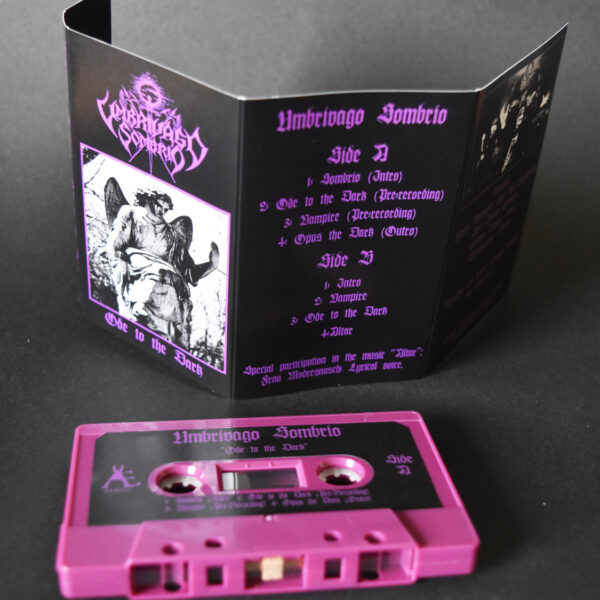 “Ode to the Dark”, the debut recording by this fearsome foursome from Sao Paulo in Brazil, plays like a double mini-set with Side A consisting of early recordings from a rehearsal and Side B showcasing newer versions of a couple of songs from Side A together with two new songs. Umbrivago Sombrio has a raw savage style, reminiscent of mid-1990s melodic raw BM, with symphonic tendencies on Side B of the cassette. From the get-go these guys are crazed and manic, just what you’d expect of a band obsessed with vampirism and the occult; one imagines they risked all to pursue their obsessions and are now card-carrying members of the Undead.

After a very creepy, spine-tingling Gothic church-organ introduction with shrill, almost acid-etched keyboard tones, the Umbrivago Sombrio boys get stuck into the title track with gloating, slavering vocals against a soundtrack of rapid-fire music with crumbly textures and soft percussion. The sound quality isn’t great (this is a pre-recording after all) though the vocals are clear enough but not so clear that you can make out what the lyrics are. The following track “Vampire” is also a pre-recording with a mix of cold synthesiser melodies, constant tremolo guitar ripple and tinny drumming. Both songs feature quite good sinister riffing and (in the case of “Vampire”) eerie otherworldly melodies amid the chainsaw guitar carve-up. Rounding off Side A is an all-synth ambient instrumental of ominous nauseous wash, bleached drone and a sinister noise drone undercurrent.

Side B plumps for a more theatrical and melodramatic presentation with an introduction of slinky synth melody and squeals of vampire brides swarming over listeners. “Vampire” is readily recognisable through its motifs despite its early half being an instrumental dungeon synth appetiser to the later raw BM main course. The vocals are a bit less prominent in the mix and the manic spiky guitars are the main highlight of this part of the song. The title track sounds more powerful and ferocious than it did earlier and the drumming really chugs and pushes the song along. Plenty of aggression in the singing, the guitars and the drums along with a rock’n’roll groove section early in the track make this version of “Ode to the Dark” a stand-out.

Final track “Altar” is where the band goes off on a symphonic BM mini-opera tangent complete with female operatic vocals, clean-toned whispering and orchestral backing behind the frenzied BM bashing and cold blizzard winds. A mix of crumbly BM vocals and cleaner background singing, strong hellish riffing, acoustic guitar melody, complex drumming and a sense of dark urgency make this raw punk-like BM song compelling and suggest that the Umbrivago Sombrio men have plenty more eccentric and experimental tricks up their sleeves.

Even though the musicians offer just three songs and a few short instrumental atmospheric mood pieces, they seem confident enough in their song composition abilities that they can offer a bewildering nine-minute collage of raw symphonic BM, frigid atmospheric dungeon synth and acoustic guitar that work well together. The tape shows off Umbrivago Sombrio in an experimental mood playing with elements of their style and exploring different genres within their core 1990s-inspired melodic BM style. They may be taking inspiration from classic 1990s acts like the French Black Legions bands at their most raw, experimental and plain nutty. Still, the Brazilians need to come up with more songs to demonstrate that they’re serious (well, not too much so) about being an eccentric and eclectic experimental vampire BM act.