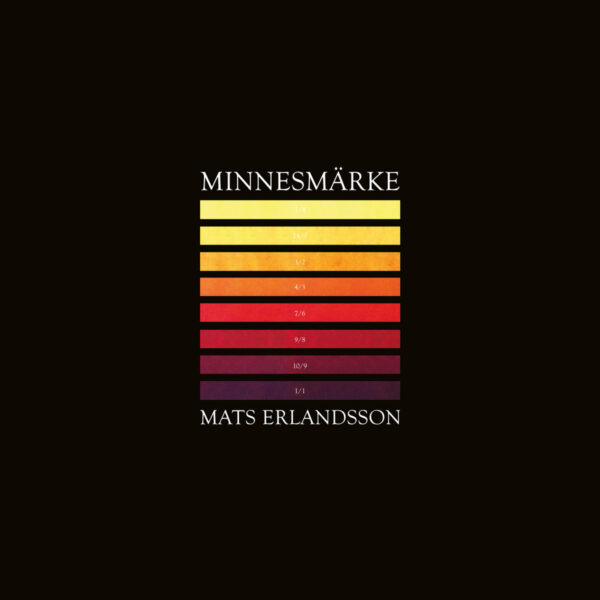 Originally from Örebro in inland central Sweden and currently resident in Stockholm, Mats Erlandsson is part of the current drone music scene in the capital as both a solo artist and in collaboration with others. He also works as a studio assistant at the Elektronmusikstudion recording studio in Stockholm. “Minnesmärke” is Erlandsson’s first album for Hallow Ground and was originally a commissioned work for the Non Existent Center as part of a month-long artist residency in Ställbergs Gruva, a former iron ore mine where Erlandsson’s grandfather used to work. The album’s theme revolves around the history of the Bergslagen region where the Ställbergs Gruva mine is located and the part that iron mining played in the prosperity of the Bergslagen area and Sweden after World War II, helping to underpin the social welfare state that developed over time. After the 1980s, with the domination of neoliberalism as Sweden’s political and economic ideology, the mines in Bergslagen began closing, the social welfare state weakened and diminished, and communities in the area lost their prosperity. “Minnesmärke”, meaning “memorial” or “monument”, is Erlandsson’s sad farewell to the mining industry and to his grandfather in particular.

The two-part album is built around tuned sustained tones performed on electronic and acoustic instruments, supplemented with field recordings made in the mining complex. A sense of dislocation due to the passage of time and the fortunes of the mining complex (converted into a cultural centre) in that passage is very strong. The mood throughout the album can be depressive yet at the same time it seems calm, placid and steady. Funnily the mood can be at once remote and intimate depending on your feelings and thoughts as you listen to the album. Constant crackling noises behind the long tones bring the soundscapes much closer to you than you’d probably like: they seem to suggest that in the activities of the miners who worked in the complex long ago, there was plenty going on in perhaps an unconscious or subterranean sense. What the miners might have thought or felt, or what they said to one another, as they laboured is hinted at. Were they just thinking of the quotas they had to fulfill, of how many hours left on their shifts, or were they thinking of other things that we are not supposed to know, such as how they would organise their work if the mine were under the ownership and control of the workers and not the mine owners in their distant offices in Stockholm – or in their country homes and yachts?

The music is initially at its most low-key plaintive and melancholy on first track “Vilja”, with long quavering drones gradually coming to dominate the track. Metallic noises give an industrial-factory ambience to the drones. The general mood is one of quiet and sober observation of an industry in its twilight throes as the passage of time – new governments, economic crises around the world, the rise of neoliberalism to replace Keynesian economics and social democracy as the only supposedly viable ideological basis for government decisions – sees in the gradual deindustrialisation of Sweden and its transformation into a society whose main sources of income include arms trafficking to nations with sordid human rights records. The other track “Slakt” is not greatly different from “Vilja” in its structure, pacing and solemnity but in later parts of the second track there is a feeling of hope and warm radiance. For all that the Ställbergs Gruva miners may have had to endure for much of their working lives over the decades, many of them sacrificing their health and lives to help find and produce the wealth that sustained Swedish society in the mid to late 20th century, they also had hopes, dreams and aspirations for a better life, a life that they and their families might share in and benefit from.

The album has a solemn power enlivened by the background or subterranean noises which constitute a soundtrack in their own right. It will never be easy-listening music and listeners with short attention spans may pass on this recording. It does deserve to be heard at least once, to remember those generations who toiled in the mining industry in Ställbergs Gruva, who gave up much so that their children and grandchildren might reap the rewards their mining antecedents deserved, and whose voices are now silent. Even though most of the music consists of long droning tones, these are highly atmospheric and sometimes very intensely powerful and awe-inspiring elements. The juxtaposition of field recordings and long drones sets up a tension that can be very ominous. This definitely is not a work to be taken for granted.