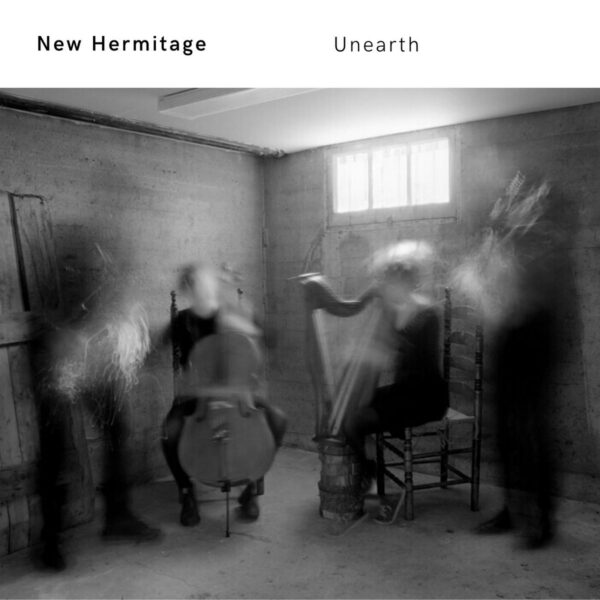 New Hermitage are an improvising group from Halifax in Canada, led by Andrew MacKelvie who plays saxophones and clarinet; the other members are India Gailey (cello), Ellen Gibling (harp) and Ross Burns (guitar). They’ve been playing since 2017 and this, Unearth (NO LABEL), is their fifth album.

Where the players overlap is their shared respect for the music of Jerry Granelli, the Canadian jazz drummer who played on many of the Vince Guaraldi Charlie Brown soundtracks; Andrew MacKelvie regards Granelli as his “mentor”, although this shouldn’t lead you to expect bouts of user-friendly melodic jazz on this Unearth record. On the contrary, it’s a rather downbeat and lugubrious experience, with restrained tones and mannerisms from all the performers, along with a generally pessimistic theme and atmosphere – about which more shortly. New Hermitage are proud of their “spectral” ambitions, and want to evoke a dream-like experience for the listener with their all-acoustic sounds; what’s interesting is that they don’t seem overly influenced by contemporary European developments in the field of reduced playing, and by comparison these Halifax players emerge as almost romantic in their lyricism and narrative themes. The harp of Gibling especially is one element which lends an echo of faded Victorian grandeur to this strange music, while Gailey and Burns generally opt to “walk” the music along at a steady pace, with their stately plucks and bowing actions; indeed if there is a walking metaphor to be explored, it’s fair to say that the walker has their head bowed and is afraid to look at their surroundings with darting eyes as they traverse the cursed earth.

This “cursed earth” is one of the stated narrative subtexts of Unearth, and the liner notes explicitly describe an imagined future scenario “in which pollution has decimated the population of the earth, and dangerously high levels of toxicity have rendered the cities of the world uninhabitable”. The players hew close to this storyline, carrying it in their minds and collective imagination as they play, and every one of these eleven tracks can feasibly be read as a new chapter in this post-apocalyptic tale, both in the music and the title scheme. This “eco-dystopian imagery” is another hallmark of the group, and for all I know it may apply to all of their previous recorded and published work. It’s not a bleak message, though; I can think of many artists in the fields of industrial, Black Metal, noise and doom who would relish this story and turn in a message of bitter despair, whereas Unearth is full of hope for the future, a sense of closeness to nature, and contains many hints of a possible regeneration. In this, it reminds me of the movie The Road (based on the Cormac McCarthy novel), which may start out grim, grisly, and shocking, but ends up being marred by rather cheap sentiment as the story progresses, just so the film can end on an uplifting note. This isn’t to say that Unearth is as compromised as that piece of sentimentalised Hollywood kitsch, but the players do have a habit of softening the core of the statement in places, sapping some of its force.

Interestingly, New Hermitage claim to be influenced by the Deep Listening practice as promulgated by Pauline Oliveros, which may account for their more cohesive moments of group playing. Oddly enough, it’s the leader MacKelvie who sticks out on occasion, being the only one of the group who continues to exhibit any interest in old-fashioned jazz-based sax licks, perhaps something he inherited from his Granelli tutorage. From 29 September 2020, sent to us by Nick Storring in Toronto.