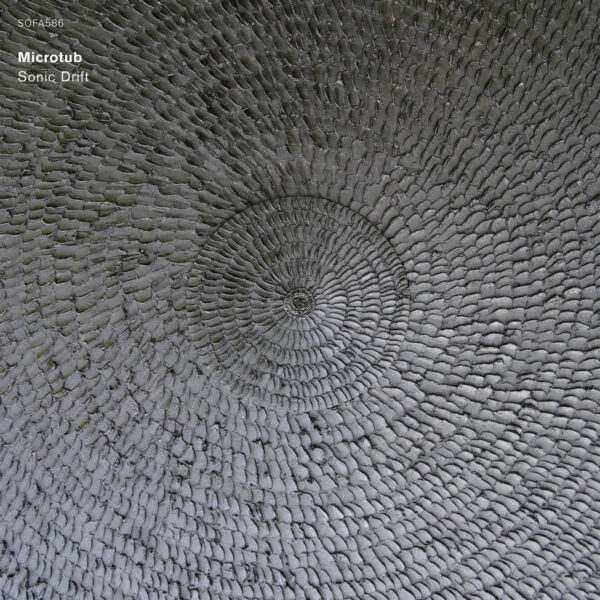 Microtub here with Sonic Drift (SOFA MUSIC SOFA586), their fifth album since they first appeared on this Norwegian label in 2011 with their eponymous debut. Robin Hayward of Berlin is joined by Peder Simonsen and Martin Taxt, two of whom we’ve heard over the years with their contributions to modern improvisation and minimal composed music.

Hayward has refined his music considerably over time, growing ever-more minimal ever since the days of the first Phosphor album (2001), which is considerable when you think that group were aiming for a very “reduced” form of playing in the first place. With his recent compositions presented as picture discs, Reidemeister Move Plays Borromean Rings and Words of Paradise, Hayward revealed his talent for very precise and self-contained compositions. I can’t always say his music has excited me much, but there is much to admire in the compaction of ideas into narrow spaces, even when the results are slow and long-form in nature. Hayward it is who composed the title track here, and it’s an instance of how their music can involve quite a long gestation period – it started life in 2018 at a Berlin festival, where I believe it was performed inside a large water tower and made use of the exceptional natural reverb in that space.

The second piece, ‘The Pederson Concerto’ is a joint composition by the threesome, and it’s unusual in that Peder Simonsen intervenes in the performance in such ways to trigger sounds from the other two tubists, and he provides a tasty background drone from his Moog synth. Form, process, environment are all being used effectively and feeding into the compositions. The other thing to note is the “microtonal” tuning being employed by the players on their instruments. I have no idea what this involves, and when the press notes speak of neutral harmonics, subharmonics, multiples of partials and detuned perfect fifths, I am at a loss – but I do read these details as an earnest of the precision and care which Hayward and his team pack into their work, in a way that approaches mathematics. Results: dense, hermetic, minimal music, played with conviction and a steady, determined assurance. (30/03/2021)