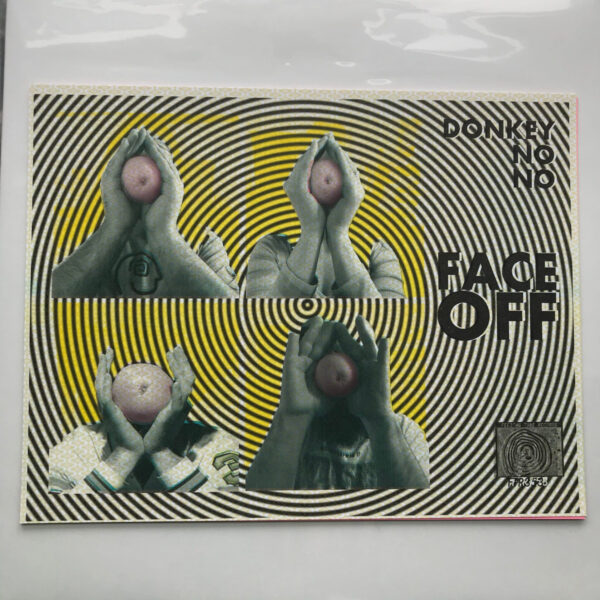 From USA, Donkey No No is the trio of Ted Lee (co-owner of Feeding Tube Records), guitarist Omeed Goodarzi and the violinist Jen Gelineau, last heard by us with their 2016 LP Dream Away Lodge. Today’s item Face Off (FTR353) is a very limited (20 copies) lathe-cut 12-incher, received by us in February 2021, though at time of writing the physical edition still seems to be available.

Two side-long acoustic performances serve up over 50 mins of music, very introspective and melancholic in tone not unlike the previous record, though made all the more poignant with the spectre of COVID-19 lurking with its baleful presence. Within their simple set-up, the trio find interesting ways to vary the overall sound and explore interior byways; Gelineau plucks the strings as well as bowing, and there is one moment where she picks out a delicious minimal suggestion of a melody on side A. Lee exhibits considerable restraint with his bowed cymbals (and perhaps other metal objects), only really making his presence known when there’s a need to punctuate the end of a musical sentence. Guitarist Omeed Goodarzi still sounds the most conventional to me, rarely departing from a major key and executing plain homespun ripple-picking figures. Even so, at their best Donkey No No remind me of the brief ‘Trio’ interlude which King Crimson performed at the Concertgebouw with just mellotron, bass guitar and violin. The label’s web page for this item informs us, hopefully tongue-in-cheek, that the record is an alternative soundtrack to the 1997 John Woo movie of this name. (06/02/2021) 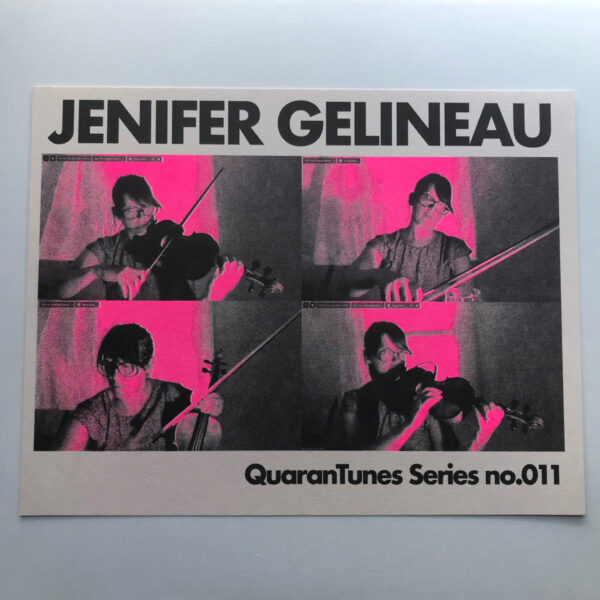 As if in answer to my implied plea for more musical output from Jen Gelineau there arrives her solo LP QuaranTunes Series No. 011 (FTR566) released under the name of Jenifer Gelineau, and also a limited (28 copies) lathe cut. This seems a good moment to mention the other collaborative work of this Massachusetts musician and her membership of Egg, Eggs, Jurt Branch, Moose, Ovature, and Phurnne. This label and its curators are not averse to stressing the small-scale private-press aspirations of their editions, and a corollary of that is the small, select audience and low visibility of much of the music which they represent.

In this instance, we’re talking about a concert given “from a secret location” somewhere in Greenfield that was broadcast as a Zoom conference on one evening in June 2020, during the general international lockdown – a time when many experimental musicians were making imaginative use of the internet to create virtual live concerts (and of course publish more albums on Bandcamp). Gelineau’s solo album is a hidden gem and an artistic success. It shows another side to her work, making use of foot pedals and electronic effects to enhance her violin work and add avant-ish elements in the form of noise, loops, delay, and other interventions. However, unlike the European EAI brigade, she’s not aiming for a smoothened blend of integrated sounds, and if anything the aim seems to be to separate out her violin playing from the rough-hewn experimental noise, a strategy which succeeds admirably on the first track ‘In’. This is 12:51 mins of quiet, intimate genius, drawing the listener into a small zone of compassion where we can come out of the cold and lonely unknown.

On ‘Through’, Gelineau makes slightly more conventional use of a delay/repeat effect that enables her to loop short riffs and proceed to accompany herself with keening, very simple bowed lines on the violin, followed by her own singing voice. Once again the emotion triumphs over the process, and the results are heartbreakingly poignant, full of longing. Press notes from Byron Coley rightly point out that Gelineau’s violin melodies often remind us of traditional [American] folk forms, and splicing that strain up with these extreme experimental moves is one of the elements that makes this such an exciting proposal. For an even more extreme take on the latter, the final track ‘Left’ is 8:41 mins of looped and processed sounds, including some voice elements and perhaps percussion of some sort, creating a mesmerising quagmire of strangeness.

Without much to-do and with a genius for making it seem easy, Jenifer Gelineau creates something any electro-acoustic studio-bound composer should envy. A gorgeous record and a fragile document of a rare event, and highly recommended. (01/03/2021)