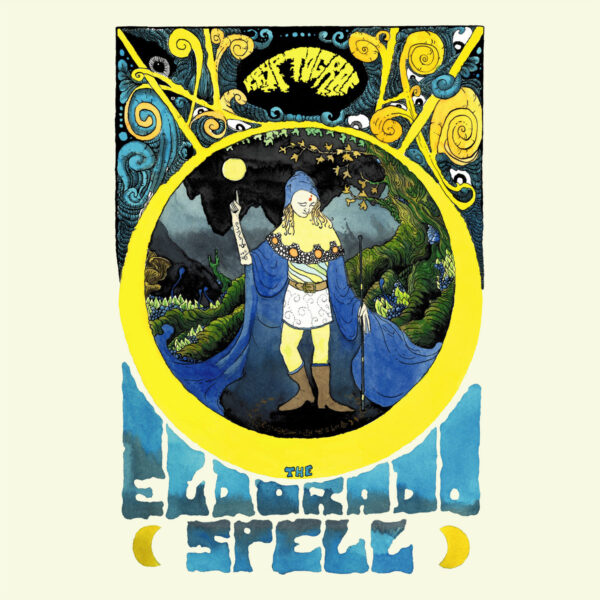 The foursome from Bergen may still be in their 20s but they must have very old souls steeped in the rock scene of the late 1960s / early to mid 1970s; after starting out with Sabbath-inspired fuzzy psychedelic doom / stoner rock on their first self-titled album, Kryptograf move to a cleaner, harder, more atmospheric desert-rock sound and style on follow-up full-length “The Eldorado Spell”. True, on most songs the musicians do not stray far from their inspirations and you would think with three members trading vocal duties among themselves they could do more than ape Ozzy Osbourne and other 70s hard rock / prog rock singers. The music on this album is distinguished mainly by its presentation which is polished yet raw, and by its consistency in the song-writing and general musical delivery. Whether playing rugged doom, raw dark blues or catchy pop tunes with a hard rock edge, the Kryptograf men perform impeccably with precision and enthusiasm if not with very much originality.

Opening track “Asphodel” might start slow, doomy and chuggy but suddenly transforms into a smart flamenco-style acoustic piece with plenty of verve and spirit. “Cosmic Suicide” is a punchy track with catchy tunes, some intense solo lead guitar and a good vocal performance. “Lucifer’s Hand” sees the band diving into their Sabbath inspirations for a dark doomy song that is memorable mainly for the spaced-out psych ambient effects in the music’s background. As the album continues, the energy level and aggression flag considerably and tracks like “The Spiral” turn out rather monotonous and repetitive. By the time we are well into the second half of the album with tracks like “The Spiral” and “When the Witches”, the freshness and enthusiasm from earlier in the recording have disappeared and the polished retro-70s hard rock style is becoming irritating. Closing track “The Well” retrieves some of the lost energy and passion with a mix of retro-70s progressive hard rock, heavy driving doom bass and unexpected surprises in the song’s structure and pace.

What starts out as a promising album exploring old rock genres and showing there’s still potential for fresh creativity and innovation in those styles ends up being rather too devotional in later parts of the recording. The sad part is that the same song can boast some very good musical highlights – the bass guitar taking the lead on some tracks and turning them into brooding blues pieces for a short while can be especially stunning – but also include a lot of monotony, repetition and music that sounds as if a million other retro-70s doom / stoner / prog bands had already used it in the not too distant past. The folk influences on the album help to expand its style and emphasise the mystical fantasy lyrical themes but the acoustic guitar music itself is not varied enough to make much of a difference.

Where the album really excels is in taking an unorthodox musical approach combining elements from different genres in ways that initially are jarring and jerky but, on repeated listens, become the recording’s saving grace. “Asphodel” and “The Well” which open and close the album respectively turn out to be its highlights due to their unusual hybrid natures. Much of the rest of the album unfortunately doesn’t come to rivalling these two songs in inventiveness.