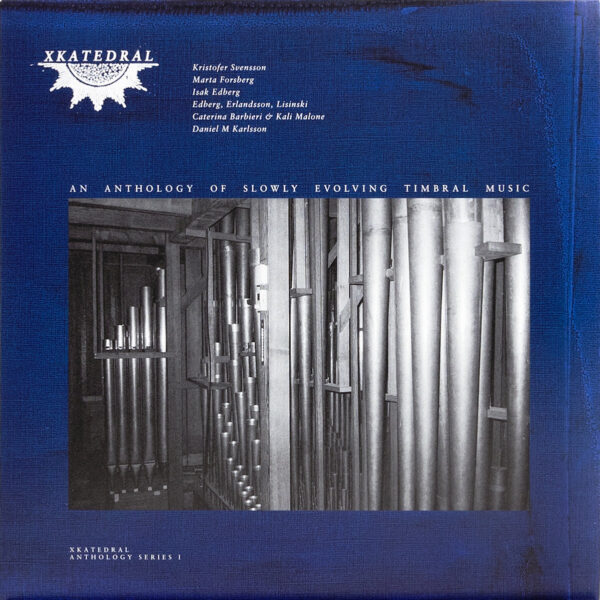 As it says, this double vinyl release is the first in a series of archival releases focusing on musicians associated with the Stockholm-based label XKatedral who work in the arena of slowly evolving harmonic and timbral music. XKatedral was founded several years ago (in or around the year 2015), initially as a cassette label, by musicians Maria W Horn and Kali Malone, the latter also appearing on one track with Caterina Barbieri on this first volume in the series. All six works presented on this release were recorded in the period from 2010 to 2020 and four of them were originally released on cassette by XKatedral early in the label’s history.

All six tracks are beautifully presented with clear sound and tone. We start with a highly resonant work by Kristoffer Svensson, “Ir Himmin, Grooen”, featuring just-tuned gamelan percussion and prepared piano woven into each other in a way that their sounds can barely be distinguished from one another. Careful and active listening and concentration will enable listeners to tell the difference but this may need repeated spins. Marta Forsberg’s “Disquiet (Heart)” is a long droning melodic piece exploring the tonal and harmonic spaces of the pipe organ at the German Church (Tyska Kyrkan), where Swedish organist / composer Gustaf Düben (1628 – 1690) worked in addition to his duties as Hofkapellmeister, a position similar to conductor or director, of the Swedish royal court orchestra. For the most part, “Disquiet …” is a rich and sonorous if perhaps rather grave composition. Amusingly though, the whole work seems to collapse in a somewhat undignified way close to the end but picks itself up and carries on.

Isak Edberg tackles the same pipe organ on “Lamé” but in a very different way: the composition tends more or less to hang onto one long droning note that nevertheless undergoes continuous change and development. The work reaches out and envelops the listener in a radiant vibrating sound filled with mystery. Edberg appears again on the next track “Dissolving Ceremony”, together with Mats Erlandsson and Victor Lisinski, on which gamelan percussion and electronics conspire to produce an intriguing and mystical piece of ringing bell-like sounds and ghostly ambience.

Barbieri and Malone’s composition “Glory” is a duet of two electric guitars that develops slowly in a dark and moody space, not unlike Dylan Carlson’s Earth in the early 2000s. Slow melodic and insistent repetition turns the track into a hypnotic and immersive meditation piece that becomes more intense towards its end. Daniel Karlsson’s “Shipwrecks” may be the last and most recent of the six works featured but compared to the others it seems a more fragile, whispery and feathery work, suggestive and indirect rather than stark and plain, and as a result it’s perhaps the most mutable and chameleon track on the album: a fitting conclusion that promises more to come in this new anthology series.

This album may be demanding of listeners in time, patience and effort to listen to all six works and repeated hearings may be necessary. With each hearing, soundscape vistas become more familiar but may also reveal something new, not necessarily to be heard again the next time the album is spun. The works featuring gamelan percussion are lovely to hear as might be expected but “Glory” and “Shipwrecks” are unforgettable in their own ways: “Glory” seems uncompromising in its laconic repetition while “Shipwrecks” is its polar opposite in its elusive and shape-shifting quality. For lovers of mesmeric soundscape worlds in which to lose oneself in slowly developing tapestries of entwined sound, tone and space, this album will take them on fascinating (if perhaps not emotionally exhilarating) journeys of sound.