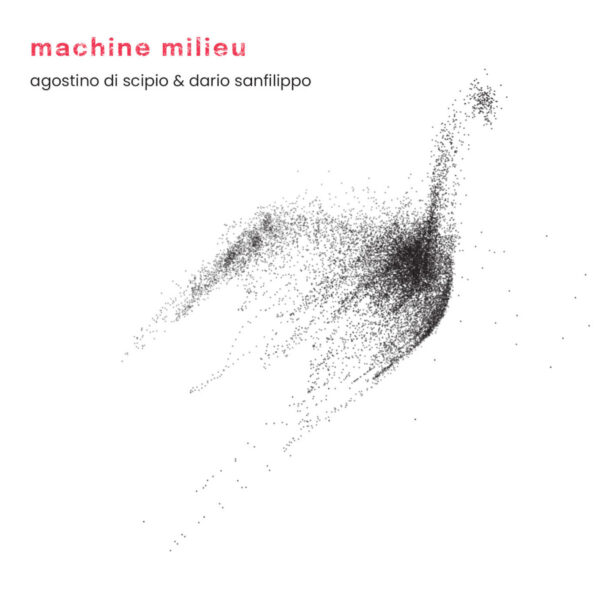 Unusual record of sound-art which may or may not be the result of interactive process-based art installations, or something…the record is Machine Milieu (TOXO RECORDS no number) and credited to Agostino di Scipio and Dario Sanfilippo. I think the composition and concept mostly belongs to di Scipio, a redoubtable Italian composer from Naples who has been active in this area since 2004, and releasing records since 2007 for labels such as Edition RZ, Stradivarius, and Neos. We might broadly characterise him as an electro-acoustic composer, but he works mainly with installations, and sometimes sets up situations where musicians can vary the work through their interactions with live electronics. Matter of fact, he also welcomes the environment – especially the weather – interacting with his pieces too.

I am groping blindly towards an understanding of the 12 puzzling pieces we hear on this record, made around 2014 and 2015 in L’Aquila, and although the composer has provided annotations, his prose is rather terse and laced with jargon, includes many references in round brackets, and doesn’t always manage to clarify what was happening here. The work involved microphones, speakers, a mixing desk, audio programming, and digital signal processing; there may also have been use of “carton pipes” to create vague whistling sounds, and the composer’s own mouth was brought into play as needed. Dario Sanfilippo has evidently been crucial, as a co-performer and perhaps as a technician – he’s a specialist in music feedback systems, algorithmic composition, and complex adaptive systems. From the notes, at any rate, what does gradually emerge is that it’s the process of interaction that excites di Scipio the most; he wants to move beyond what he perceives as the over-simplified approach that most bio-cybernetic music has exhibited in the past, and he intends that the “shared sound environment” he creates will be “a medium of energetic and informational exchange”. I’m just not at all clear what is interacting with what – machines, computers, sound events, and probably other things too are all brought into the field of play to generate cross-currents, but the success or failure of these experiments – or indeed the basis / motivation for making these experiments in the first place – remains opaque to me.

Agostino di Scipio seems to understand and communicate his work purely as description of a mechanical process, apparently indifferent to any sort of aesthetic concerns, such as content or meaning. To him, these elaborate descriptions of Machine Milieu are as self-evident and commonplace as taking plates and cutlery out of a picnic basket. Add to all this the alienating titles given to the pieces – all of them numbered variations of such made-up words as ‘Concrescence’, ‘Contexture’ and ‘Conlarsence’ – and perhaps I might be forgiven for my slowness in coming to appreciate the charms of this quiet and understated record. However, on subsequent spins I find myself being won over by these mysterious sounds, for reasons that aren’t clear to me at all; far from musical, yet also not simply “field recordings” in the normal sense…we might be engaged in some strange scientific endeavour that is inching towards a different way of viewing the world, as if we had a novel invention that could x-ray concrete, or look underneath the foundations of buildings, and turn the sky inside-out. These bizarre, far-out abstractions are packaged in a six-panel digipak, with a booklet of “visual representations” showing how all the pieces developed. So austere and stark that it makes most recent attempts at “minimal electronic composition” seem positively over-cluttered.

So, after a slow start with my lumpen faculties, gradually I’m coming around to appreciate the nuances of Machine Milieu. From 16th August 2021, the same label that gave us Are You An Orchid Or A Dandelion? In 2019.