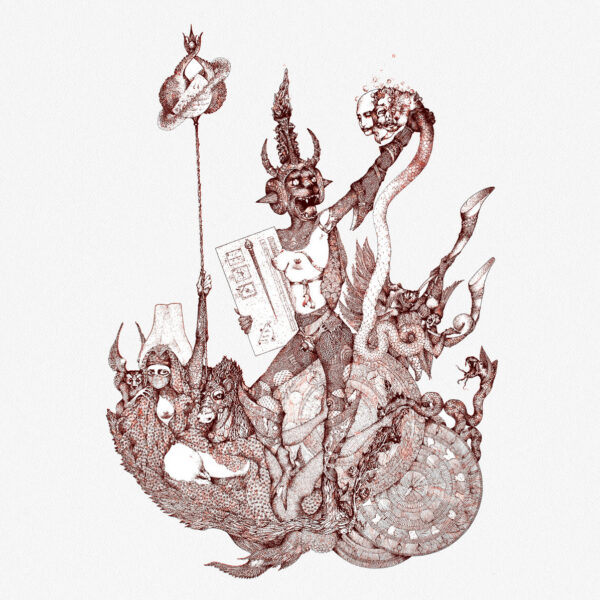 Up to his seventh album for the deranged psychedelic blackened death project that is Esoctrilihum in six years and still there is no stopping Asthâghul who surely hails from the same realms that he sings about on previous Esoctrilihum albums. How else to explain his incredible work rate in which nearly every year he puts out yet another full-length recording of the most insanely aggressive and demented music? Raw and savage, vicious and dark, and above all absolutely self-abasing, apocalyptic and despairing: “Consecration of the Spiritüs Flesh” distils much of what Esoctrilihum has always revolved around on previous albums – a nihilistic view of the universe in which humans are beset and dominated by dark and hostile forces, psychologically and spiritually as well as physically – in a more concentrated and streamlined black / death metal style. At 42 minutes, the album may be a baby compared to previous hour-long efforts but its rage, brutality, pain and terror are all the more intense and terrifying.

From the first track “Spiritüs Flesh” on, this is unabashedly raw brutal blackened death metal of the most punishing and relentless machine blast-beat percussion with the most venomous guitar scrabbling, akin to a continuous cutting chainsaw going at insane speeds through entire continental forests of trees, all topped by duetting (if not quite duelling) demon vocalists spitting acid saliva and bits of crushed rock from their throats. Having mocked choirs of chanting monks on “Spiritüs Flesh” against a background of near-industrial death metal and a desolate mood, the twin black and death metal vocals carve up what grey matter remains between your ears along with chaotic roller-coaster guitars, orchestral synth bombast and the screams of the damned falling into the blackest pits of Hell on “Thertrh”.

Each succeeding song emphasises a different aspect and level of the chaotic insanity of the Esoctrilihum universe, and how it twists what we know or take for granted into a ghastly savage caricature. “Shohih” is nearly all triggered percussion taken up to its most extreme speeds while demons bark around it and guitars pursue their own manic path. As the album continues, ambient psychedelia penetrates through the darkness and pummelling machine rhythms (“Tharseïdhon”) though it does not promise hope or comfort to us humans. The sense of impending madness and the self-loathing, pain and agony that accompany it becomes ever more apparent (“Scaricide”) as the album admits more melancholy and bleak dark ambient soundscapes behind the desperate aggression.

At times the album can still sound cartoony and self-indulgent to the point of self-parody but a clear narrative from ritual self-abasement of the early tracks through creeping madness in the middle tracks and into total darkness in closing track “Aath” reins in any tendency on Asthâghul’s part to overdo the drama and bombast. In spite of the excess, especially on “Aath”, the album never feels histrionic: it actually seems very balanced and, for all the intensity and sheer extreme aggression and madness, it is easy (for me anyway) to follow. The early violence of the title track and “Thertrh” lessens a bit and through the rage of the songs that follow, desperation and perhaps even an appeal for any help or comfort start to show.

Many bands and artists have made careers out of detailing the loss of human connection, alienation from a society in breakdown, personal despair in a hopeless situation, and the consequent spiral into depression to the point of self-harm and suicide but very few have portrayed such experiences, with all the chaos and pain involved, in such a stunning and confronting way as Asthâghul has done here. While the album is definitely less atmospheric and more “metal” than its predecessors, an alien universe is still present and draws you deep into its chaos. Asthâghul has possibly outdone himself here and delivered his best work.