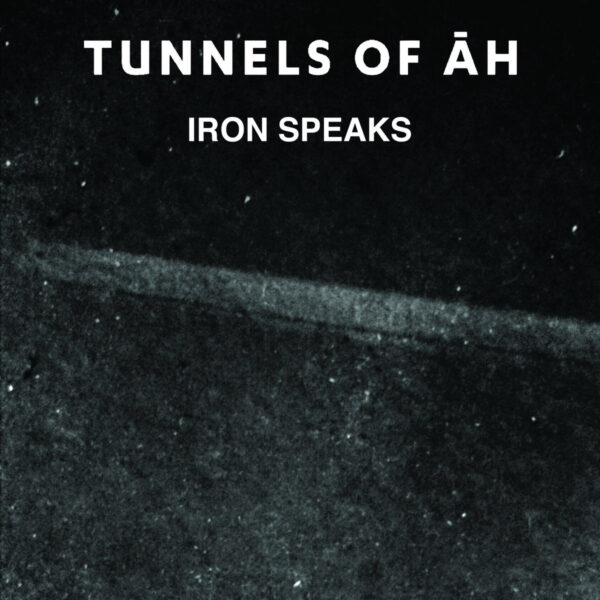 Latest item from Tunnels Of Ah is Iron Speaks (HYPERSHAPE RECORDS HPS013), which we’re told is an “abandoned” record which its creator was unhappy about at first, but has since now emerged as the sixth in a series of solo pieces made by this intense UK creator.

We’ve heard some instalments in the series already from the Cold Spring Records label, including Surgical Fires, Charnel Transmissions, and Deathless Mind, most have which have left me with vivid impressions of smoke and fire, a journey through a hydrocaust, or being trapped underground in a coal mine ‘neath a hundredweight of Sheffield’s finest crop…oppressiveness and despair have abounded in this subterranean unreality, where air and light are now distant memories. Oddly enough Iron Speaks is comparatively approachable if compared to those previous noised-up nightmares, since Mr Tunnels manages to insert a few shafts of oxygen in his otherwise sunken terrain, and overall the churning, ugly sounds are not quite as overpowering, resembling small rocks trundling ominously towards us instead of the ten-tonne granite boulder that normally crushes our bones. This new-found state of affairs – one can hardly call it “serenity”, as it’s still characterised by angst, unrest, and brooding negativity – allows us to savour some of the processing methods of Tunnels Of Ah, as the nondescript vaguely “volcanic” sounds are rolled around in the creator’s hands as if he were sculpting them with metal chisels, or chewing them with unbreakable teeth.

Stephen Burroughs has certainly found a unique voice all of his own to express his inner desolation. He declares that he originally disowned this release because it felt “unengaged”, a plaint that plagues many creatives if they sense that they haven’t managed to express enough of their personality in their work, although in this case it’s just as plausible that Tunnels Of Ah actually intends his music to engage with the world itself on some fundamental level, meshing its gears with the inexorable cogs of Fate in a vain attempt to divert the course of reality. To learn how successful his Sisyphean struggle is, you need only tune in to this latest progress report. From 30/09/2021.