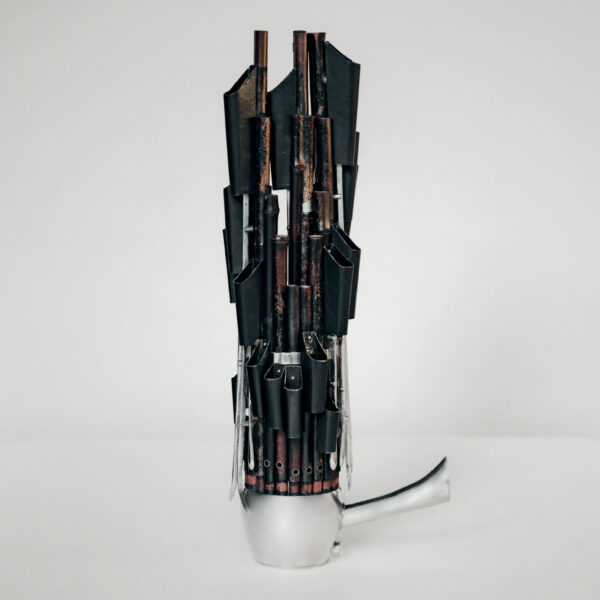 As its title suggests, “The Gleam” revolves around human responses to light and how its intensity and diffusion as the sun moves across the sky affects people’s emotions and their interactions with this phenomenon in their daily lives. Like her previous second album “Philos”, “The Gleam” was recorded by Park Jiha on her own using three acoustic instruments long native to Korea but which Park deploys in innovative ways which include playing them as solo instruments in minimal playing and recording settings. One of these three instruments, the saenghwang, a type of mouth organ, is featured on the album cover on a white surface before a white background: an indication perhaps that this instrument and Park’s other favoured instruments – the piri (a type of oboe) and the yanggeum (a type of dulcimer) – along with a glockenspiel feature in all their plain and unadorned glory on the eight tracks here.

Across the album the music is very graceful and resonant if perhaps mournful and brooding. A very dignified quality accompanies the music which may be related to Park’s choice of solo instruments and the cultural background behind them: for one thing, the saenghwang traditionally was not used for solo work but in a chamber music group setting that also included the yanggeum. Track titles trace the journey of the sun from the time it rises to the time it sets and night falls. Pieces like “Sunrise: A Song of Two Humans” and “The Way of Spiritual Breath” can be highly emotional, even a bit agitated in their own way. “Nightfall Dancer” is a very eerie and plaintive melody played on the piri with very sparing glockenspiel accompaniment: one imagines the sadness people might feel seeing the sun set and knowing that the night ahead might be long and lonely.

The album concludes with “Temporary Inertia”, the piece that inspired the whole album and which was originally created for a performance in a bunker designed by the Japanese architect Tadao Ando whose buildings often feature creative uses of moving sunlight during daylight hours. (One of Ando’s most famous works is the Church of the Light in Ibaraki, Japan, in which a window shaped like a cross is etched into a wall, allowing sunlight to light up the church’s austere concrete interior.) “Temporary Inertia” is a stately piece on dulcimer that has an almost piano-like quality in its brooding melodies.

The concept behind the album more or less requires that it be heard in its entirety from start to finish but the tracks lend themselves to individual listening. The music can be beautiful though stark, even austere in its presentation, and the sadness and wistfulness in some tracks may move some listeners to tears.