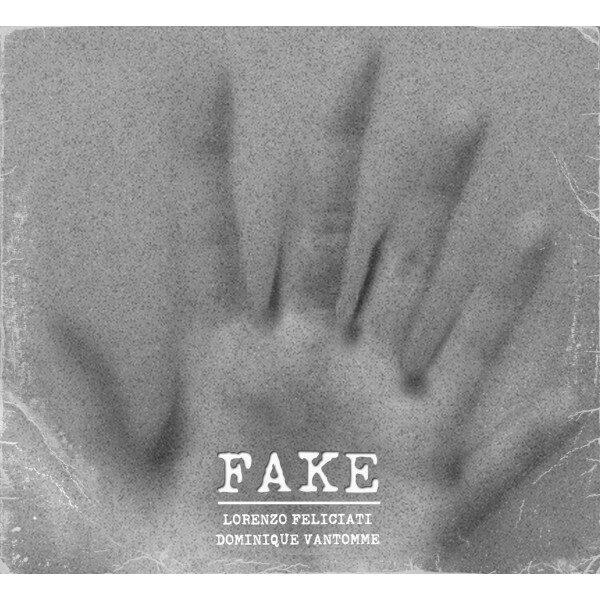 Two veteran musicians (and long-time friends) in the European jazz scene, bassist Lorenzo Feliciati and keyboards player Dominique Vantomme, from Italy and Belgium, finally were able to work and record together in Brussels, and their debut collaborative effort “Fake” is the result. Indeed at this point in time, it looks as if Fake will be the name of their collaborative project for future recordings though from what I can see on Bandcamp, “Fake” looks like a very popular bandname so the duo would be well advised to try calling their project something else. “Not Fake”, perhaps?

Whether the two call their project Fake, Not Fake or Fake or Not (after the last track on “Fake”), what’s definitely not fake here is the fun and the joy Feliciati and Vantomme are having in working together and exploring new sounds as they play with their instruments (bass, synthesisers and electronics) and recording equipment. Admittedly some of the music can sound a bit 1960s / 1970s retro-space-disco and the polish applied to the tracks can make them seem a bit too slick. Given the musicians’ respective CVs in working with other musicians in many different genres, we can expect each and every track to be rich in ambience and genre associations, to the extent that some of the musical selections might be very eclectic, even a bit pretentious. Certainly as the album progresses, it seems to name-check nearly every movie-soundtrack genre that was considered “cool” in the 1960s / 1970s, and the addition of Cuong Vu’s smoky trumpet melodies can be rather thick top-cake icing on tracks like “Bushideuse” and “Nightly Business Report” which are already redolent with edgy ambient and jazz-rock references to 1960s Italian giallo films.

From the early brightness of “Clear Blue Sky”, we travel through increasingly uneasy jazz-rock into a bleak dystopian ambient underworld “Point Two” where we stumble along with Cuong Vu’s trumpet in a cavernous desert space. “Strange Times” may be a bit heavy-handed on the ivories compared to previous tracks but it does instil a discombobulating feel as the hidden plot behind the music hits a twist that sends it into a dark detour. “Sun Day”, featuring Eraldo Bernocchi on electronic percussion, goes into a post-rock direction with Feliciati’s bass acting as the lead instrument in parts. The music takes on a brighter hue and it seems that whatever valley of the shadow of death we all had to travel through, Feliciati and Vantomme are leading us safely out of it with their instruments of comfort. Sure enough, final track “Fake or Not” is a cheerful enough piece but there’s just a bit of uncertainty in the ambient background to let us know that our Dynamic Duo might be needed again to chase down and capture those dark demons prowling around in the musical underworld. The album definitely closes on an open-ended high point.

Though the musical associations of “Fake” may be familiar to most of us, Feliciati and Vantomme’s enthusiastic exploration and journey through them knit these into a new fresh tapestry that opens up more opportunities for sonic investigation and detective work. A sequel must surely be in the works, in a pre-planning stage perhaps, when Feliciati and Vantomme cross paths again.