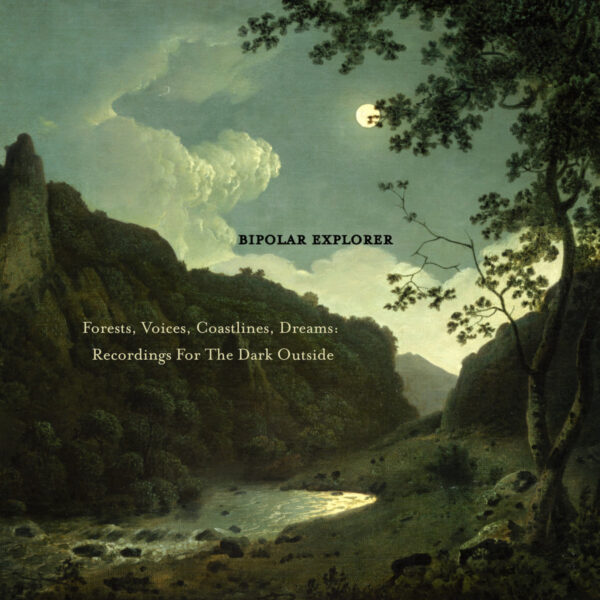 Michael Serafin Wells and Sylvia Solanas with music / sounds originally made for an experimental radio broadcast called “The Dark Outside” in Scotland.

This pair have previously done wistful songs in the “shoegaze” mode, but this is more avant; lots of layers, semi-composed in a vaguely electro-acoustic manner, very intriguing and haunting. Even so, two of their core elements – guitar and voice – survive in the published versions of these misty washes. The vocal parts are especially effective, fragments of spoken word echoing strangely in forlorn loops, or being blown away into the distance by the eerie winds, or else reciting a litany or prayer whose words cannot be discerned, and yet throughout all this disruptive action, the emotional content still projects. (This said, the words of the poem on ‘Corridor’ are just about intelligible). As to Michael’s guitar, his usual comforting flanged sound is likewise swaddled in mystery, his occasional strums adding great poignancy to the overall effect.

Peel these gtr+vox parts away and we’re left with an all-encompassing thick drone, or several such drones, produced by means unknown. It creates the unsettling effect that our plucky duo are adrift in a sea of unknown forces, underscoring the somewhat supernatural vibe of the release. Within this globby ambient murkitude, an internal rhythm subtly manifests itself, generated perhaps by tape loops and voice repetitions; this tends to convey the uncanny feeling of flight, or falling in space, as if we’re riding unwillingly on a witch’s broomstick, or being drawn into the centre of the forest by a ghostly call. Well, naturally I’m being fanciful when I say “by means unknown”, as the credit roster names a substantial array of instruments, and tape loop effects, but I still prefer my crackpot, delusional explanation.

As to The Dark Outside, this marginal project has been beaming alien particles into the Scots ether on an annual basis since 2012; when it deigns to fire up its circuits, the broadcast lasts for 24 hours and delivers non-stop spookery and witcherment to its listeners, and due to the size of its puny transmitter, the signal only reaches local ears in Galloway Forest. If that’s not goosebump-inducing enough for you, it so happens that Galloway Forest is an ideal place for viewing the stars at night (zero light pollution in the zone, presumably), and as such was the first place in the country to be nominated a “dark sky park”. Very much enjoying this somewhat uncharacteristic release by Bipolar Explorer. From 5th January 2022.