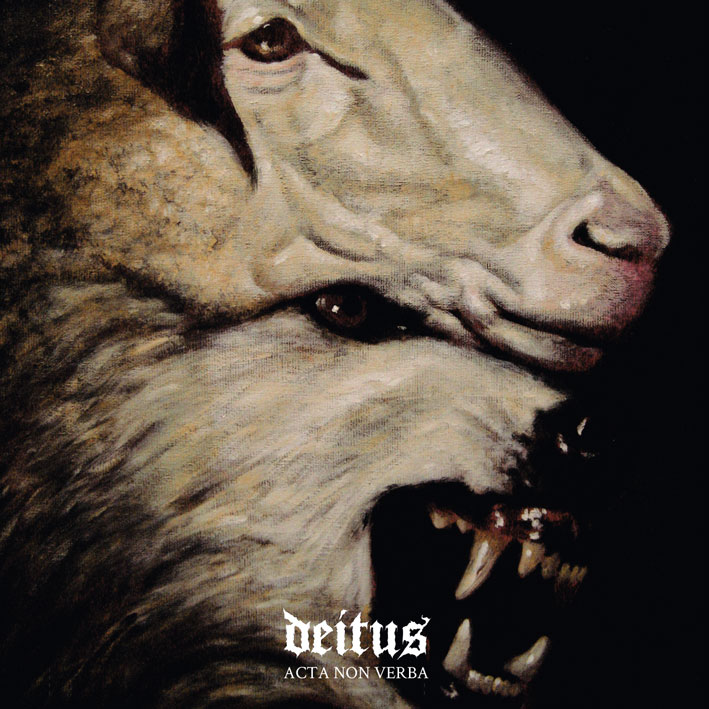 “Deeds, not words” is the title of British BM band Deitus’ debut album, though without very much information about these guys at my finger-tips I can’t say how much they live up to that motto. Here be straightforward no-frills / no-nonsense 1990s-styled raw BM that stresses hard-edged martial riffing, outbreaks of blast-beat drumming and plenty of melodies in songs boasting occult and Satanic themes. All songs show thought and care in their construction and each track stands as a flowing self-contained unit in its own right with drama, aggression and energy. The weakest element here is the spidery BM vocals which are all but swamped by the energetic music, which is a bit unfortunate as most songs feature singing and the music accommodates it, never fighting it. While the guitars have a distorted sound, the band’s overall style is actually clean and polished enough for all instruments to be heard clearly and the general sound is more steely and spacious than grinding.

All songs are played well and consistently though if they had fewer and more distinctive riffs and melodies they might all emerge as potential singles. Trying to pack in as many riffs as possible into each and every song has the unfortunate effect of robbing them all of their own identities. As they are, the longer tracks “Ladder of Divine Ascent” and “Todestrieb” coming at the end of the album stick out more, probably because they also feature some lead guitar playing, pay more attention to creating mood and ambience than the other earlier pieces or experiment a bit with the band’s style and sound.

While the album is technically good and these Deitus guys have considerable ability and song-writing skills, they need to develop a more distinctive style and sound. At present they sound very much like 1,001 other generic raw black metal bands drawing on 1990s black metal influences and inspirations. The vocals very definitely need to improve beyond raspy spider chant and incorporating a second vocalist (with perhaps some death metal influence) probably wouldn’t go astray. There are indications on the later tracks, especially “Todestrieb”, that suggest that what I’m hearing here is just a small part of what Deitus are capable of and they could certainly include more ambience and non-BM elements than they do here.

C’mon guys, we’re looking forward to your second album where deeds not words are what we want you to live up to!