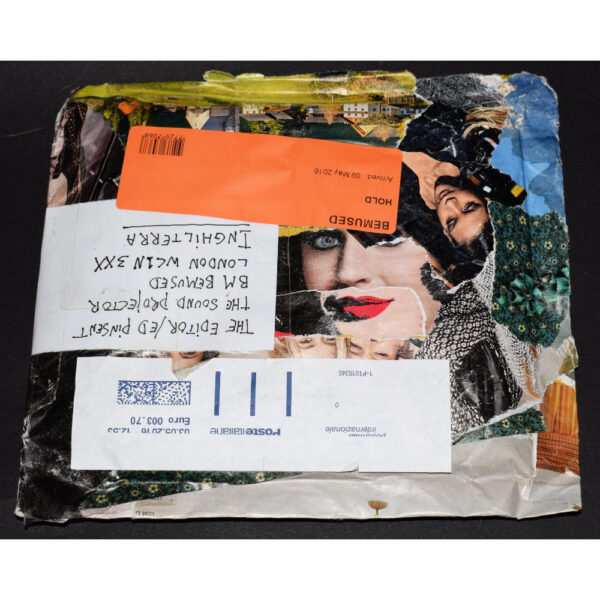 Two more cassettes from Staaltape arrived 9th May 2016. It so happens both releases are by women, and very coincidentally the imagery on Rinus Van Alebeek’s collaged decorated envelope (which he customarily includes with every mailout) features the faces of women clipped from his vast stack of old magazines.

Patrizia Oliva has created Numen – Life Of Elitra Lipozi, a most beautiful work clad in a smoky black cover with just a single blue butterfly spray-painted on. The A side, titled ‘Danse Des Fantomes’, is dreamy and evocative and makes me a willing dancing partner of the proposed ghosts and spirits. Voices, loops, and even some vaguely operatic elements are refashioned by Oliva into something personal and strange. She’s playing with magnetic tape like a gifted child sets to work with a box of watercolours. I don’t know why musicians (like Michael Nyman) are drawn to the work of Oliver Sacks (this release includes dedication to that deep thinker). But Oliva may be trying, like Sacks, to map the strange pathways of the brain in her atmospheric and charged music.

The B side ‘A Day Long To’ showcases the “Annette Peacock” mode of this performer…vaguely jazzy free singing she emanates from an indefinable part of her singing apparatus, in an inflected and mannered mode…the lonely avant-ness of Joan La Barbara is notched back two degrees and edged a shade closer to a ghostly portrait of Ella Fitzgerald…by which I mean it’s not clear if she’s singing from her mouth, or her brain-waves. Of course the minimal arrangements that back her up are pretty inspired too, making the most of a studio housed in a matchbox and two rubber bands holding everything together. More tape loops and much dreamy unfinished music drifts into the ether. A nice not-quite-there quality, slightly balmy. Oddly the B-side feels to me like separate songs, where the A side feels like a mini-opera telling a story. Not all that’s here is a song; there’s one very effective piece which is extremely abstract, just repeated patterns, sound effects, and whispered / murmured voices, yet it’s uncanny and highly effective in its dream-like mood sustaining of same. The side ends with a fascinating anecdote about synaesthesia, how it’s possible to see music as colours, and how no two people who have the condition ever agree on what the “right” colour is. Interestingly, the condition was first recorded in medical history by another Dr Sachs, this time a German physician of the 19th century.

In all Patrizia Oliva not only has a singular vision but also a very delicate touch in the creation of her work which is determinedly “non-masculine”, which isn’t to say it’s feminine and decorative, but organised along non-aggressive lines, without the usual male need to follow structure blindly and rush to a contrived ending. “Patrizia lives in the country, surrounded by nature,” write Rinus helpfully. “One lady from the old world”. If that’s true, that’s one old world whose passing we will come to regret. Every commonplace remark made on Twitter hastens the death of these old worlds.

The tape by Valerie Kuehne is of a different order. I couldn’t find a title but it might be called Audiozone #3, part of a series; release is just identified by the two sides, called ‘Ball Side’ and ‘Other Side’. Patrizia Oliva is pleasantly balmy, while Valerie Kuehne is an inspired screwball, in the nicest possible way of course. “Valerie moves in the concrete jungle”, writes Rinus about this American performer. Her songs here feature a kind of demented folk-inflected chanting and yawping, for instance the opener ‘Haul Away Joe’, a sea shanty which requires the artiste to remake herself as a crusty nautical cove on board an 18th century rigger. A grotesque opener. ‘The Graviton’ is better, more of a shamanic free-form wailing trip…like a lost ESP Disk recording from such waywards as Erica Pomerance, much free warbling with plenty of percussion and manic performances from her side musicians. ‘Apocalypse Berliner’ is a spoken word recit which gradually becomes more, erm, impassioned…as she describes some situation which sounds like a grave social injustice, her sarcasm shoots through the top of the thermometer and she becomes positively demented with her passion and commitment to the cause. The sort of loopy radical who might have featured in any 1970 Hollywood hipster road movie made in the wake of Easy Rider. Then there’s ‘Long Long Sleep’, which is like a nightmare parody of Edwardian parlour music with its poised and mannered vocalising which over-stresses certain phonemes in an annoyingly pronounced manner. But you can still sense the underlying nuttiness…her cello work, just now beginning to surface among the chaos on offer, is also certainly highly distinctive and evidence of a wild, peculiar talent.

B side of this weirdie in tape form contains ‘Sunshine in the Sunshine’, which is her freakoid take on the Fifth Dimension pop hit, with emphatic singing, chaotic playing from the guest musicians, her mad cello sawing and her frantic attempts to stir up collaboration among all participants. A glorious mess. You’d hate to have her at your birthday party, unless you love to be embarrassed and mortified. A mostly solo work follows, ‘Architecture at Muchmore’s’, with its cracked all-over-the-show melody, and alarming dynamics which require these abrupt shifts of tempo and sudden bouts of intense delivery. Shocking, crazed. Voice and cello only, I think, were used to realise this insight into the cracks of Kuehne’s brain. After this it might be a piece called ‘Leader Eater’ but it’s getting harder to tell one track from another. Part of what we hear sounds like a confrontational performance-art piece that involves yelling at the audience, and further ingeniously complex songs where it’s a wonder she manages to sustain the difficult long tones which the tunes require. I’m a-warming to this release now…Valerie Kuehne is a very acquired taste, but you don’t get this exceptionally high degree of uncut humanity and honesty captured on tape every day. Ably supported by her side players, which include Natalia Steinbach. Alex Cohen, Hui-Chun Lin, The Columbia Orchestra, Matthew Silver, and others, she saws and sings away. Other releases by Valerie Kuehne include Dream Zoo and Phoenix Goes Crazy, both very obscure low-run CDRs.

The tape itself is a provisional attempt at an “album”. Rinus Van Alebeek made the selections and put it together, but didn’t get much in the way of preferences expressed by the creator, who’s presumably so creatively chaotic in her life that she doesn’t bother with bourgeois things like organisation and planning. So “it is not an album by Valerie; it is an album about her”, is the stated claim, along with an attempt to document the “subculture she is a part of”. This provisional aspect is even reflected in the cover, showing details from a notebook, where the track order and even the titles are subjected to much crossing-out and rethinking. Most intriguingly, the result “leads to a couple of obscure passages into 21st century life somewhere in the US.” What in the name of Condoleezza Rice does that mean?