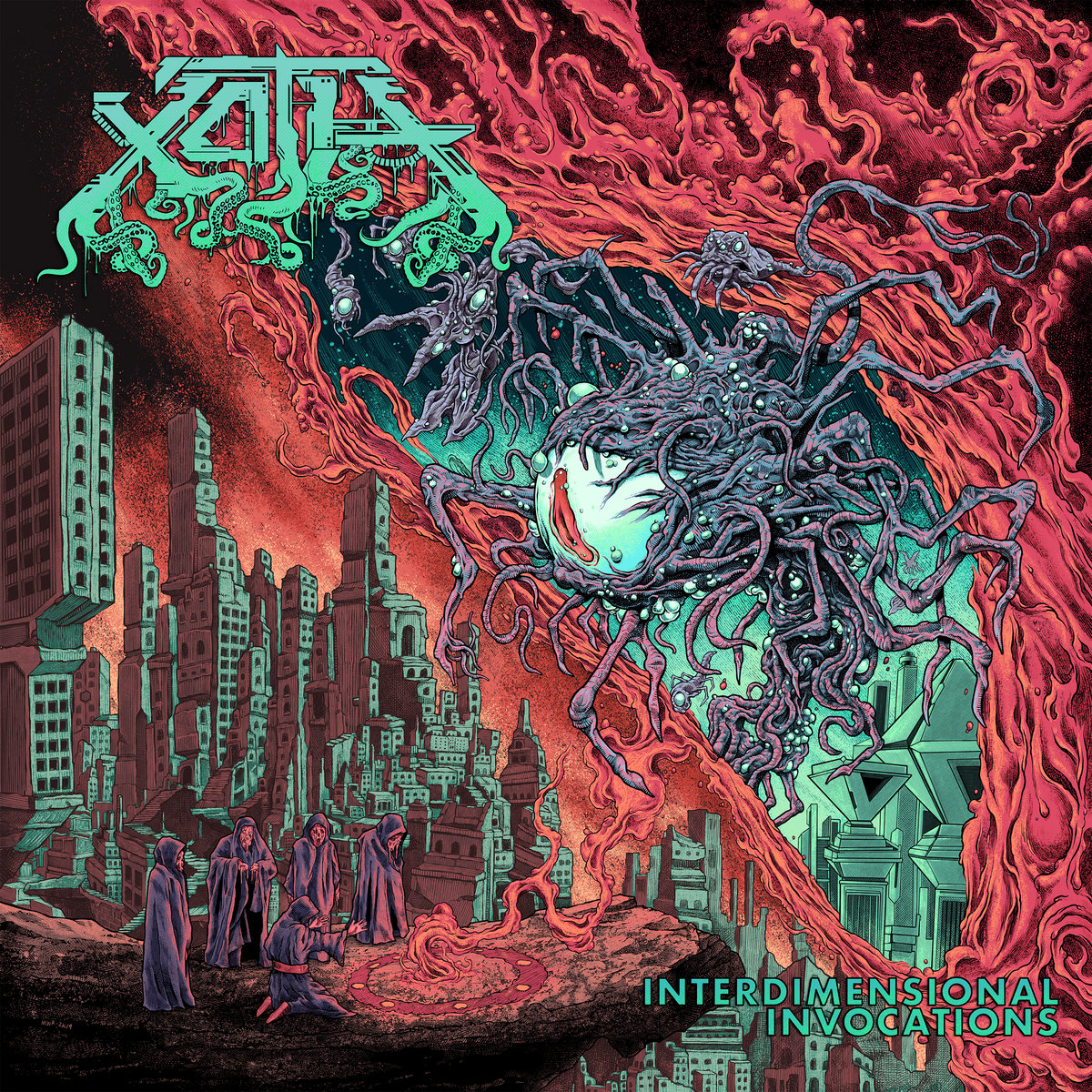 Like its tongue-twisting title and the intricate cartoony artwork, this album, the second by Seattle-based black / death / thrashers Xoth, is a tight, dense and intricate affair of songs packed with lots of time signature and key changes, flippy blast-beat percussion, chunky rhythms and lyrics combining sci-fi fantasy, aspects of the occult, Lovecraftian themes, conspiracies and a nihilist attitude to humanity. The songs are delivered in a very clean production with plenty of space within each track in spite of the densely layered music and most instruments and the dual vocals, calling and responding to each other, can be heard very clearly. The technical execution is sharp and impeccable. Yet somewhere along the way, somebody forgot to tell the Xoth guys, busy as they were with the technical aspects of composing the music and recording it, that they need to write ACTUAL songs with melodies and riffs that flow into one another and make each and every track a self-coherent monster being. The result is an album where the songs tend to bleed into one another and resemble variations of the one meandering, torturous meta-track. Because each song hews to much the same template of song composition – pack in as many speedy technical thrashy riffs and melodies into the one song, and don’t change the sound or ambience (non-existent anyway) of the music and its production with each new song – the tracks don’t have their own distinct identities and it’s up to the rasped lyrics to identify one song from the next.

That the album tends to sound much the same throughout is a pity because the Xoth guys obviously enjoy what they do, and play with so much enthusiasm and a sense of humour that you feel such a curmudgeon for daring to kvetch about the album. There’s quite a lot in and about the lyrics to like: they’re not densely packed with long words impossible to pronounce in a rasping guttural death metal voice that would have you racing for the online dictionaries to find out what they mean, and the images they evoke are comic-strip immediate. It’s a real pity that the style of music doesn’t change for each change in the subject matter of the songs: the music tends to be rather one-dimensional straight-up death thrash cartoon metal with very little black metal influence. There’s very little that’s scary here and much that I’d call campy and kitschy.

The album is likely to be Xoth’s breakthrough into the alternative mainstream of tech death / thrash metal. For all its imperfections, it’s likely to be a cult classic for its humour, energy and the high standard of musicianship on display.