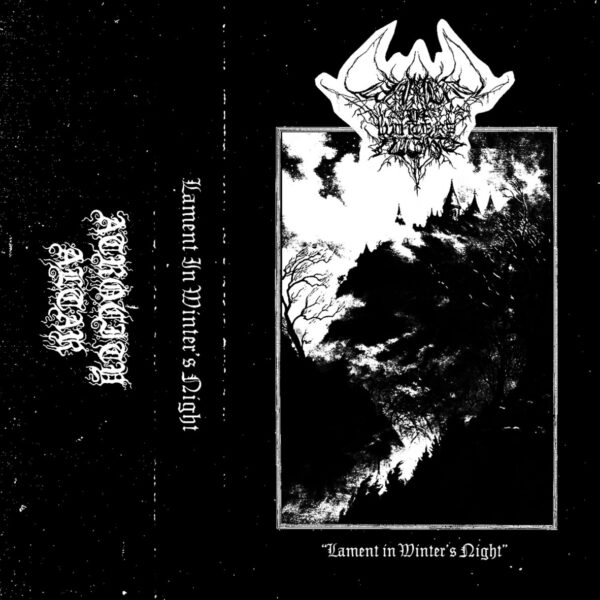 Lament In Winter’s Night is a new raw depressive BM act based in Australia and the label that has released LIWN’s debut recording, a self-titled EP on cassette, also appears to be very recent, having released sixteen tapes or digital recordings by a small group of black metal, dungeon synth and similar dark music artists all within 2019 and not before. Well, “raw” might be an understatement in describing the style of black metal on this recording: this EP can rip your ears off your head and strip the wallpaper from your walls if you play it loudly enough – which you may need to, to hear the quiet all-ambient introduction which gives no indication of the noise-guitar abrasion that assaults you if you  then leave the volume level as is. The EP proper explodes with “Beckoned Beyond the Twilight”, dominated by screeching demon vocals and deep-frying tremolo guitar playing a melody loop that funnily sounds a bit mediaeval folk. The lack of drumming is noted at once so the music is completely reliant on melody for its structure and identity. Likewise the following track features a different melody which is also on repeating loop with the vocals in the far background roaring away like a drunken ghost choir. The melody plays a bit like a nursery rhyme tune, it has a jaunty style, almost as if it were an old sea shanty. The last track follows in the same manner as the previous two, again with a strongly folk-like melody loop but with the folk inspirations more obvious in the tremolo guitar work, and with yet more brawling demon shrieks and screeching.

While the music is repetitive and not much varies from one track to the next apart from the repeating melodies and riffs, the EP is an interesting experiment in minimal old-school second-wave black metal combining elements from the genre’s depressive and folk-influenced strands. Perhaps the surprise is that with so much black metal, depressive black metal and folk black metal having been made over the years, you’d think these styles are all but exhausted; yet this EP demonstrates that there’s life in them yet when they’re combined. On top of this, LINW (for the time being anyway) has restricted its choice of instruments to voice and guitar and still managed to produce a fresh and raw recording with a very individual style. This act bears watching for more interesting music experiments.