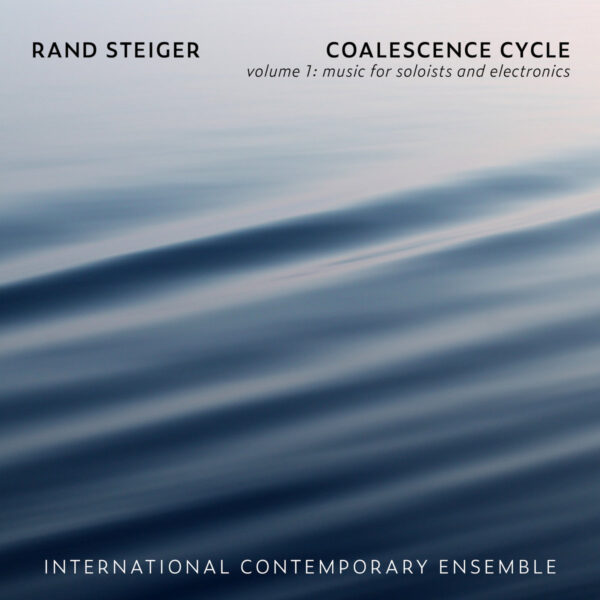 Quite good contemporary classical-avant music from Rand Steiger on his Coalescence Cycle Volume 1 (TUNDRA tun013). The plan here has been to combine a solo player from the International Contemporary Ensemble with live electronic / computer music, the latter performed by Steiger himself…he’s been developing what appears to be a fairly unique platform for this, with the help of Miller Puckette (who owns the Puckette’s Pure Data system), and it allows Rand Steiger to do clever things in real time with filters, delays, and other enhancements. In particular he seems keen on harmonising the musical tones so that they conform with his scheme of Just Intonation (on which he’s also keen). The acoustic solo instruments meanwhile include clarinet, flute, cello, piano, and bassoon, played by Joshua Rubin, Claire Chase, and others.

Many of these tunes have evident narrative themes, often connected with wind, water, and weather; Rand Steiger may have clothed himself in techniques and methods from 20th century modernism, but a part of him wants to be a landscape painter in sound. The first two pieces ‘Cyclone’ and ‘Beacon’ contain many startling intervals; Rubin’s clarinet is almost leaping energetically in the air on the first, while Chase’s flute does her best to “interact” with the live electronics to play the part of a lighthouse beacon at sea (and also make some connection to Density 21.5, the famed Edgard Varese piece). You may prefer the relative calm and subdued mood of ‘Mourning Fog’, where the cello of Kivie Cahn-Lipman delivers a heartfelt tale of woe (based on a personal tragedy of the composer) and just about manages to stay on the right side of sentimentality; in this instance, Steiger’s over-use of the processed echo adds a spoonful too much saccharine for me, but since the cellist isn’t adding much of their own personality in the performance, perhaps it’s needed.

Throughout this set, I kept yearning for a bit more boldness in the computer-based interventions, and only ‘Concatenation’ comes close to giving me what I seek; on it, Steiger sets out his “unique approach to signal processing” on the bassoon playing of Rebekah Heller. Apparently there are seven different things going on at once here, structured in a manner which the composer refers to as “nested etudes”. In a gatefold card cover with an extensive booklet of notes; arrived 2nd April 2019. Available via New Focus Recordings.