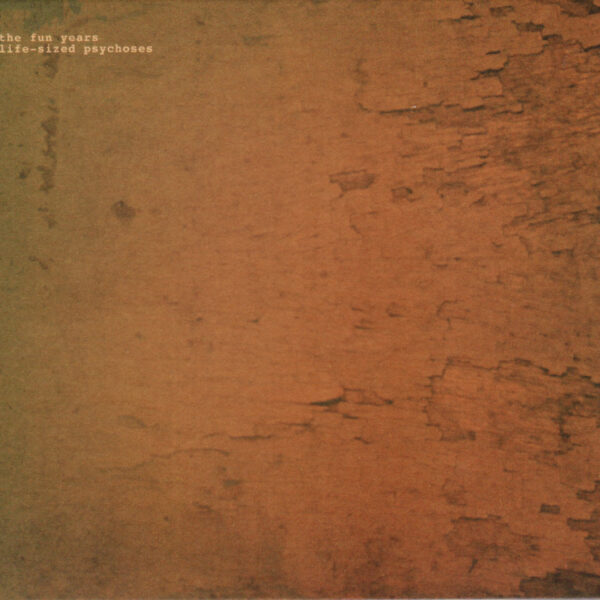 The Fun Years are a couple of guys Ben Recht and Isaac Sparks, who suffer from Life-Sized Psychoses and want to share them with the world, in shape of a CD by the same name, on the Brooklyn-based label BARGE RECORDINGS (BRG 002). Enduring a psychosis isn’t quite the same as being a paid-up member of the booby hatch, but the cover art tells its own story and does indeed suggest the visual scope available to that of a brain-damaged soul confined to the rubber room; peeling paint and rusty iron walls suggesting the grim and horrifying confines of a hospital ward. Inside, the CD (coloured in a lurid green) depicts a cartoon drawing of a “happy” family scene that David Lynch woulda loved, suggesting that it’s the pressures of the modern nuclear family that are usually the root cause of said psychoses. Be this as it be, the duo (who only ever appear in superimposed double-exposure photographs) produce their languid, psychotic-tinged droney music using only a bass guitar and a turntable. These five tracks of sonic diablery are certainly intriguing; their intention is to ‘artfully conjure notions of memory, space and the subconscious’. Scientists have been trying to do that in the laboratory for years; can The Fun Years succeed where they have failed?

While I’m still mentally trying to escape aforesaid cell in my asylum, I might enjoy the sounds of heizung raum 318 (1000FÜSSLER 008) to amuse me; it’s another example in that rare species of experimental music, sounds produced using a radiator! Scoff ye may, but I’ve at least two such recordings in my personal stash. Sound-artists worth their salt really dig the sounds of malfunctioning household equipment, and the four Europeans here – Nicolai Stephan, Asmus Tietchens, Stefan Funck and Gregory Büttner – have signed their names to that particular roster with dispatch. They each do one ‘steaming’ track, with exception of Mr Funck who takes the lion’s share of the thermostat and turns in four ‘hissing’ statements. At the end there’s a five-minute unedited version of a documentary recordings of the three radiators in the room blasting it out. This is gonna be a lead-pipe cinch…it seems the foursome met up in Room 318 on a regular basis, but for what dark purpose the sleeve notes remain silent. If, like me, the only scene you’ve ever enjoyed in Eraserhead has been the appearance of the Radiator Lady, then this is the album for you.

Got a couple of anonymous-looking white label CDRs from BlackGapDeathTrap Records, with a letter signed by its worthy proprietors Flo and Raphael; these young geniuses may represent a fairly new label as only six releases have been confirmed so far, with BGDT 007 on its way. Nonetheless both these white devils will repay some further attention with benefit of hearing aid turned up to max. Poochlatz‘s Cold Turkey (BGDT 006) purports to have six ‘songs’, although in practice said disc seems to be a continual 27:32 track with no index points; wrapped in a striking cover of a stern monochrome photograph depicting an elaborate vaulted church roof, this one promises to be a real gem of evil, frowning, black-metal derived harsh ambient. A trio of insane Israeli loons using only guitar, bass and voice, the Poochsters have had a record (Victims of Self-Preservation) noted and praised by Jennifer Hor last ish, which may send curious listeners scuttling off to check it out … also in the DeathTrap envelope, their sizzling new compilation record which features a track from every one of their releases to date; strong stuff abounds from Gundis, Tugnut, Josh Lay, Altar of Flies, Kylie Minoise, and Kvllvllvllv. ‘Let us know if you are interested in any releases,’ comes the teasing line in their letter. I may just follow up on this offer, based on the radical blasts of old-school shriekery and nattering noise that appear to lurk within their barrels.

Ophibre sent a strange hand-made CDR from its home in Brighton MA in the US. Puzzle Pieces (oph3) comprises two tracks of what might be reprocessed field recordings and documentary snatches overlaid with heavy, mysterious droning electronic pattterns. A curious construct, it promises to unfold in a rewarding way. Inside the wallet are two pieces extracted from a jigsaw, inserted with care in a little specimen bag that might be used by archaeologists to rescue tiny fragments of pottery shards from a dig. Now I know how Batman felt whenever he had a message from The Riddler waiting for him in Commissioner Gordon’s office. If you think you can guess what malarkey this master-criminal is planning before Robin and myself can reach the scene of the crime, by all means visit Ophibre.com and puzzle it out.

Here’s a vinyl artefact from Sweden that’s probably already attracting bids in excess of 65 Euros on eBay Sweden; it’s called KKH1 Lock Grooves, and it’s a seven-inch single commissioned by our old friend Carl Michael von Hausswolff, that undoubted master of startling experimentation. Guying them with promises of a bag of sweeties or malted milk of their choice, he prompted six students at the Royal University College of Fine Art in Stockholm to create a lock groove track; the results of their painterly-styled tape manipulations appear on side one, while side two is reserved for a ‘mix’ of the original material executed by the maestro himself with his pale, but large, hands. In true fine art fashion, the record has been issued with seven variant sleeves; I suppose true collectors will need one example of each, so send your postal orders in to Royal Records now. Apparently the six students, once their sweet rewards were consumed, were so taken with what they’d done they promptly formed a performance group based on this one record, which they play on seven different turntables in a live situation. Impressive! At time of writing, I’m without a tonearm on my turntable, but I hope to remedy this situation by next week.