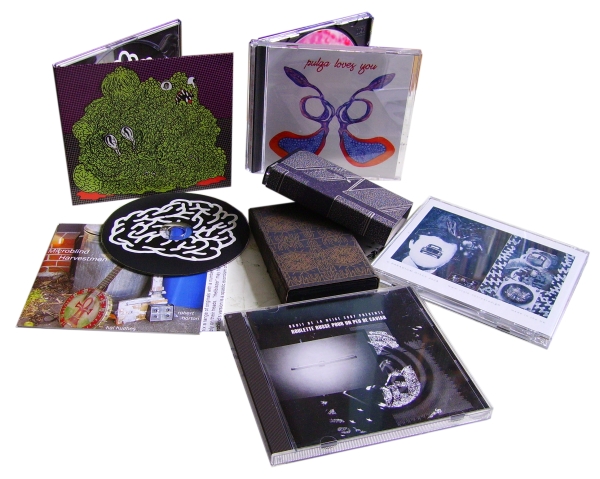 Pulga declare their amorous intentions with Pulga Loves You (FIRE MUSEUM RECORDS FM 10), their utterly alien CD of same name. The prospect of these disorienting and shape-shifting mindscapes may make many a potential suitor think twice before pressing their romance with Vanessa Niwi Rossetto and Valerio Cosi. Any possible grasp on linear logic has been expertly effaced with digital reprocessing, smudging, blurring and overlaying, to produce five semi-nightmarish quagmires of fascinating multi-textured hookery-pamookery, droneage, and melted glorp. The eighteen-minute ‘Raga Pulga’ which closes the disc will subtly but inexorably work the listener’s mind into a state where straitjackets are required apparel. This is taking ‘tough love’ to new extremes!

We’ve got an hour’s worth of ‘vintage’ electro-acoustic genius by the UK’s Trevor Wishart, on Machine (PARADIGM DISCS PD 25). From 1969-1971 and originally issued on the very rare Electronic Music from York LP box set in 1972, Machine‘s title and graphics might lead the listener to expect 60 grueling minutes of factory machinery tapes arranged in looping layers that would cause even Einstürzende Neubaten to punch the clock and call it a day, but it turns out to be much more refined and also contains a lot of ‘choir’ work. This being the early 1970s, said choir are not ‘singing’ as such but speaking, shouting or chanting significant words like ‘automation’ and ‘mechanical’, according to directions supplied on printed cards. The combinations of these rather alarming voice-epics with the other atmospheric and befogged tape loops is little short of amazing, instantly conjuring a greyly grim mood which reminds you of what the UK was like in these dark days. I’m expecting to turn on the TV now and get Edward Heath delivering a patronising broadcast, if only the electricity wasn’t cut off. Another fine rescue job by Clive Graham.

Microblind Harvestmen is the American duo of Robert Horton and Hal Hughes. On Songs and Instrumentals from Death Bottom Slide (DIGITALIS DIGI 042), the pair clash banjos, guitars and old-time fiddling with some strange electronic and digital experimentation to produce a highly post-modern take on US Americana and traditional folk. This is not quite the Folkways back catalogue revisited, nor is it informed by the historical developments taking place in the Newport Folk Festivals of the early 1960s, but it is very compelling listening. Traditional folk melodies are a starting point of sorts, but the tunes are atomised, to make room for meandering slide-guitar excursions that transport the work into the realms of cosmic psychedelia.

Roulette Russe pour un peu de Caviar is one of many fine new releases of troubling electro-acoustic tape-doom from the great Monochrome Vision label in Russia. This spacey comp features prime examples of melancholy-tinged and highly atmospheric sound work by Kolpakopf, Bardoseneticcube, Interior Disposition, Instant Movie Combinations, Moscow Laptop Orchestra, and many more. The CD was assembled – and I might add also brilliantly sequenced – by label boss Dmitry Vasilyev, and it’s a totally compelling listen start to finish, largely akin to watching huge flakes of smog-blackened snow falling onto a fog-bound urban scape. That ‘snow’ image was suggested to me by the fact that the CD was commissioned for the Bruit de la Neige festival by Studio Forum in France last year. Until spring arrives, this slowly-changing suite of drifty noise is your safest bet for winter listening pleasure!

Got a couple of hermetically-sealed cassettes from New York’s Phaserprone label. Power Visions (PPR07) is a split by Grasslung and Pelerine, the former being a solo side project of Jonas Asher from U W Owl, who provide the other cassette New Birth of Old Death (PPR05). Both releases are filled with exceptionally imaginative and dread-inducing electronic sounds, although U W Owl just manage to scoop the prize with their supernaturalist and spooked-out track titles such as ‘Corpse Candles’ and ‘Amidst a Fuligin Cloak’. Limited to 100 copies each, these gems are packed in tight little decorated slipcases that make them resemble magic boxes that an alchemist could use to open portals to a new dimension.

Lastly, Eat Shit (APR 002) is the unappetising suggestion of Jazkamer according to their new CD on the equally unappetisingly-named Asspiss records. The CD alternates heavy blasts of old-fashioned table noise, with far quieter stretches of bewildering voice and radio collages. Pound for pound, though, the roaring and squealing tends to dominate one’s listening pleasure here. I feel sure that, once heard in entirety, many engaging segments will rise to the surface of this poisonous gumbo, but this morning I find that Marhaug and Hegre’s distorted and heavy equation isn’t quite inspiring me with the joys of Lent. Cover artworks by the amazing Denis Tyfus adorn every possible surface of this fine digipack; this Belgian genius renders all animal life as huge piles of lurid green viscera and cerebral matter, sprouting monstrous eyes and broken teeth, and lying in pools of reeking blood. What the man dressed in his pants on the back cover is doing to one of these monstrous mounds is a sight not suitable for young eyes. Apparently this is a ‘tour only’ release, thus probably making it tough to find a copy by conventional means, so I shouldn’t grumble.