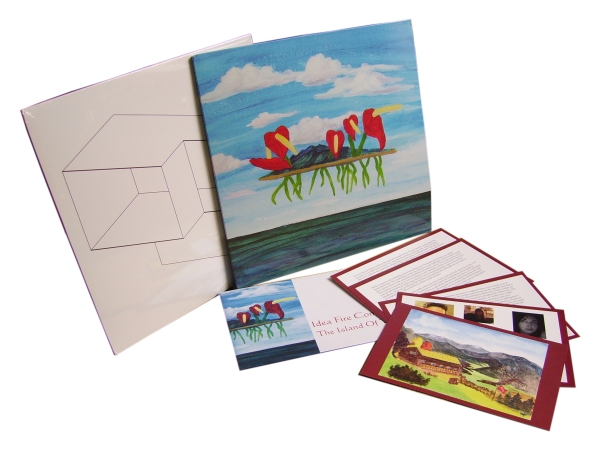 Couple of new vinyl goodies arrived courtesy of Scott Foust and his Swill Radio label. The new Idea Fire Company LP is The Island of Taste (SWILL RADIO 026). I can safely vouchsafe that I think this is the best work they’ve ever produced. The texts provided reveal Mr Foust delivering his usual high-handed sentiments regarding the production of a ‘masterpiece’ (his contention is that the modern world doesn’t really want great art because it’s too much trouble to produce and it doesn’t sell), but perhaps The Island of Taste is as close to a masterpiece as IFCO have yet managed. After the disastrous closure of their previous pressing plant, it looked uncertain for Swill’s vinyl future (Foust believes in the absolute supremacy of vinyl over digital media and will defend that position to his last drop of blood), and yet here be a high-quality pressing and very beautiful sleeve decorated by IFCO member Karla Borecky. The package arrives with an envelope of outsize postcard artworks, recalling the folder of prints provided by artist Peter Schmidt for Brian Eno’s Before and After Science, that seminal 1977 LP. And you’ll find affinities with Eno (for example Music For Airports, or his work for Bowie’s Low) within the LP. The slow, eerie music shows IFCO have benefited enormously from Borecky’s move towards the acoustic piano; now she can actually deliver resonant chords, instead of struggling with monophonic synths. Indeed, the analogue electronic sound which used to feature so heavily on IFCO records has been all but replaced by other, simpler sounds: principally the radio and tapework of Foust, the found sound of Lambkin, or the mixed singing voices of Borecky, Swenson and O’Reilly. True to form, it is also a concept LP, but compared to Tales From Topographic Oceans (for example) the concept here is not easy to grasp immediately, and its underlying message is not a palatable one. One side one, the musical explorers set to the task of building the imaginary Island of Taste; in so doing, they manage to suggest limitless vistas which the imagination of the listener can wander across for days. On side two, the inhabitants of the island are already defeated, and deliver four sad musical laments to past failures. The last of these, ‘Last Man…Last Round…’ is desperately bleak; it’s perhaps the single most challenging listen that Foust and Borecky have ever committed to tape. Not an easy forty minutes on offer here, but every minute has been carefully chosen with extra-special care; it’s a condensed work of near-genius.

The record with the white cover and stark geometric design (by Josef Albers) is a stark, geometric LP by Asmus Tietchens, Teils Teils (SWILL RADIO 027). This release confirms Foust’s abiding interest in the European avant-garde and his penchant for listening to demanding minimal electronic music. ‘Teilmenge 20’ on side one is a comparatively rich mixture of crackling sounds arranged in careful layers, to suggest vast cavernous spaces; almost like an aural optical illusion. Side two contains three extremely severe experiments in minimal feedback and pulsing arrangements, including ‘Ein weiteres Leben geht zu Ende’. This of course translates from the German into ‘A lovely waitress will get you in the end’, although this carnal fantasy of mine is not exactly confirmed by the near-empty noises which pour off the black grooves of this particular spiral towards blank oblivion. The work is undated, but it feels like it ought to represent the more recent (and stripped-down) side of Tietchens’ endeavours.