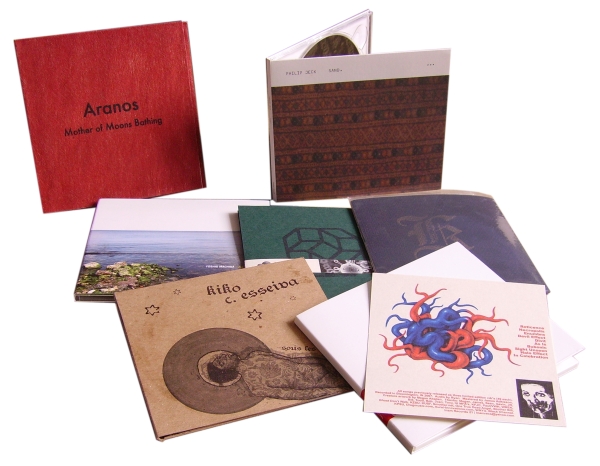 A personal pleasure to receive the splendid new release from Philip Jeck, Sand (TOUCH TO:67). It feels too long since his last solo record. Sand has been put together from live recordings made some time ago, edited by Jeck at his Liverpool home, and is a fantastic assemblage of deeply moving and elegiac music. Filled with reminders of human mortality, its metaphysical aspirations are given additional weight through the simple addition of an Emily Dickinson quote about ‘eternity’ on the inside cover, and the dedication to a Jeck family member (perhaps his mother) who died this year. It seems pointless these days to mention Jeck’s working method which starts with old records on old turntables in various states of operability and functionality, often in multiple large-scale set-ups; pointless because (I hope) most listeners are aware of this already. Edwin Pouncey recently stated how Jeck plays his records as though they were musical instruments, and that’s accurate; he’s as familiar with his vinyls and Dansettes as Derek Bailey was with his Gibson guitar. The evidence is all here on Sand, and it’s a set of beautiful music which totally transcends the method of its production. This one is mandatory purchase!

We received a generous package from Inam Records of Bloomington Indiana, all of them intriguing representations of contemporary US underground noise and drone. My favourite might be the full-length noise fest provided by Korperschwache on their Brotherhood of the Bowl (INAM 18) CDR; I certainly enjoyed their mini-CD for Public Guilt. The Texas duo wield their guitars and drums fearlessly, building huge edifices of lumbering dinosaur feedback, while their humourous titles (‘Fire is the Answer to Everything’) relieve any sense of turgidity. They seem to love Black Metal, yet can’t help sending it up at the same time. Olekranon‘s Cohesion (INAM 21) is a compilation of sorts, gathering tracks previously released as very obscure and limited CDRs. All ten tracks combine sinister and worrisome noise with fractured drum-machine beats, a strategy which works very well as long as he reminds said drum-machine just who’s in charge. Dirac C has a limited self-titled CDR (IMAM 20), mostly the work of solo player James Adkisson with his multi-dubbed guitars. Every track appears to be in a different style – we’ve got avant rock, queasy ambient soundscapes, pastoral noodling, and insane doodles aided by effects pedals. Also in the envelope (not pictured), two very limited three-inch releases: Sujo‘s Pia (INAM 22), a single 21-minute dronework with an old engraving of a sea monster on the cover, and Vopat‘s self-titled record (INAM 19), which is six tracks of quite good home-made guitar rock which might appeal to fans of Mono. The label does not have a website yet, but curious listeners are advised to send an electronic message to inamrecs [at] yahoo [dot] com.

Hinterzimmer Records is also the home to Herpes Ö Deluxe, a strange Swiss combo whose retrospective CD we reviewed in issue 16. Kiko C. Esseiva has recorded Sous Les Étoiles (HINT 04) for the label, and a true puzzler it is too; more sound-art than music, it’s a dense construct of strange scraping noises, eerie voice and spoken word passages, and uncanny distant blarts that might as well be made by some distant mythological horseman blowing into a conch. The quasi-poetic titles involve stars, fanfares, water, dancing and travels, and the ‘En Rêve’ track, for me, confirms Esseiva as a born-again follower of Max Ernst. The sleeve is gorgeous, clever collages and decorative overprintings on a brown card gatefold jacket, plus a full-colour insert displaying four surreal artwork-assemblages. Label-mate Reto Mäder, who also records as RM74 and compiled said Herpes CD, did the mastering for this spooky weird dreamscaper.

Yoshio Machida brings us the utterly charming hypernatural#3 (BASKARU KARU:10), the third part of a trilogy begun in 1999; it so happens I was sent (and still cherish) hypernatural#2 which was released in 2001 by Softl Music. Here, the gifted and mystical Japanese genius combines some live musical performances with field recordings and electronic music, constructing and processing everything to perfection using the Max/MSP program. Unlike 90% of shilly-shalliers who use similar processes, Machida actually emerges with something that’s not only worth hearing, but is also exceptionally compelling and (at times) beautiful. Aki Onda, the wonderful sound artist who records the world around him on cassette tapes, guests on ‘Camouflage’. Machida intends there to be some continuity across the entire hypernatural series; if only one could access a copy of volume 1, which was self-released in 1999.

We may need to do some ‘research’ on Aranos, whose Mother of Moons Bathing (SOL 145 CD) is available on Soleilmoon. On first spins, we hear a highly bewildering mixture of things. Dark ambient instrumentals and slow-moving creaky floorboard soundscapes alternate with highly idiosyncratic songs, performed with a lilting acoustic guitar so as to resemble a kind of avant-garde calypso and delivered in one of the most peculiar singing voices you have heard since the work of L Voag (ex The Homosexuals). If still not sufficiently baffled, the inquiring mind can make what it will of absurdist titles such as ‘Towards Glittering Warm Dumplings’ and ‘Invisibility Cloak of Time’. These last two are assigned to two long tracks at the end of this bizarre release, the ‘Dumplings’ suite in particular emerging as a brilliantly demented 21-minute excursion into the Amazonian heart of darkness, apparently while riding on the back of a gigantic five-legged beetle. Play this track last thing at night, and who knows what dreams it will engender in your fervoured noggin!