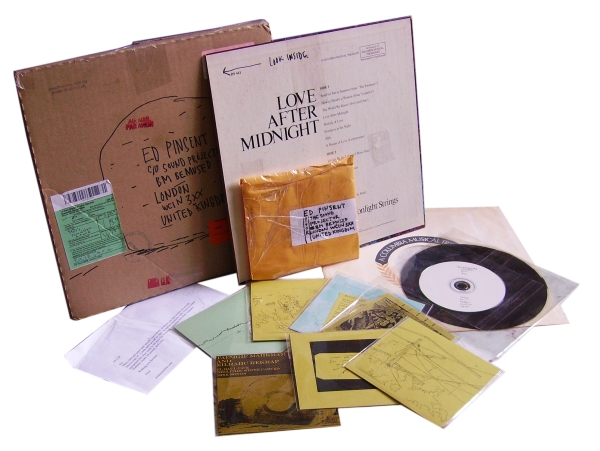 This bundle of blessingness comes from Jesse Paul Miller, the Seattle-based artist whom we interviewed in issue 11. Everything you see is a CDR packaged by his own artisan’s mitts into little xeroxed packages and plastic wallets. The main event is called Reconstructed Optigan Disc, a very limited (10 copies) CDR mounted on top of an acetate print of a black disk. A small and easily-produced art object. The acetate print depicts an old Optigan record with extremely thick grooves, an image which Jesse has collaged and cut up with all the abandon of Christian Marclay (who glued together shards of actual vinyl LPs, to make a multi-coloured sculpture). Doubtless what we hear on the CDR (50 short tracks) is snippets of the sounds that have resulted from Jesse’s peculiar brand of process-mayhem when he salvaged what he could from one of these antique novelty records. (For more astonishing information on the world of Optigan than you could have dreamed of, see here.) Fragments of bouncy organ music leak out from a morass of deathly, horrifying and unnatural sounds, for the most part happy accidents produced by malfunctioning equipment meeting a damaged object. This overlaps strongly with the excellent work of Michael Gendreau in California. Jesse made something of a name for himself in the Seattle art scene with his ‘secret records’, where he recast old vinyl discs in resin and filled the resin with foreign bodies before it set, thus producing many a colourful artefact / sculpture. I commissioned a special one myself (I can see it on my wall as I write). And he produced a 45rpm EP recording what happened when he played one of these recast monsters on a record player. Jesse’s preoccupation with vinyl history extends to his collection of forgotten easy-listening LPs from the 1950s and 1960s (we would call them charity-shop records), which he assiduously collects from yard sales and goodwill shops around the state of Washington. He wrote a little article about his hobby for Eric Lanzillotta’s Bixobal magazine recently. One such item lifted from his box, Love After Midnight by The Moonlight Strings (COLUMBIA MUSICAL TREASURES DS 441, 1969), has had its cover recycled for this Optigan release. ‘Look inside’, Jesse has helpfully written on the back with a fibre tip pen, just in case I missed finding the CDR. Also in the pack: a strange cut-up record I think is made from playing an old Folkways LP backwards, plus one by his band Algae, The Man Who Broke Everything, a project he started with John M. Allen. Also about four CDRs (and a DVD) of field recordings and ‘ambient’ sounds he made during his travels in Thailand and Laos. He’s going there again in April ‘with a little bit better equipment this time, back to SE Asia for six months including Java, Bali, Sumatra, Thailand, Japan, Myanmar and Laos’.