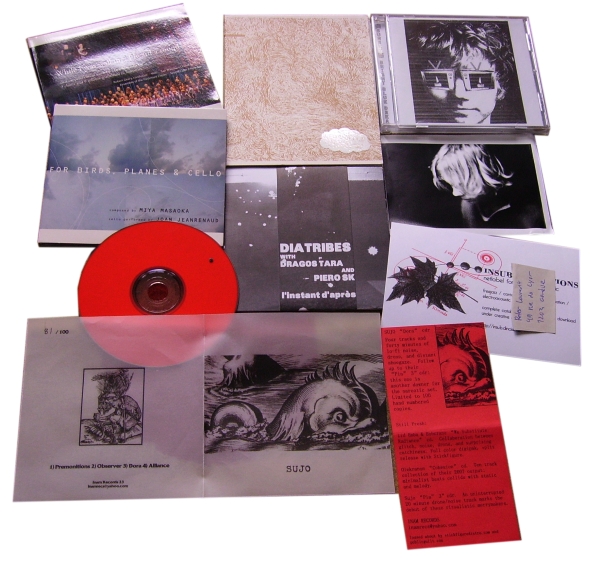 Two CDs by the classical modernist composer Miya Masaoka sent in from the small label Solitary B in New York City. On For Birds, Planes and Cello (SB 002) we have the performing skills of cellist Joan Jeanrenaud, juxtaposed with a ‘continuous field recording’, to produce some very uplifting sonic consonances for 54 minutes. Starting place was a recording made in the San Diego canyon, in which locale the composer found herself enchanted by the sounds of airplanes flying overhead and the migratory calls of various birds. She worked out a collaborative effort with the cellist to produce an assortment of musical shapes that would accord harmoniously with the sounds on the tape. There is no real ‘message’ underlying any of this (unlike there might be with Pauline Oliveros, who if she visited the same canyon would apply her ‘deep listening’ methods and exhume many a spiritual nugget from those massive stony walls), just a simple pleasure taken in handling sonic shapes and abstractions and fitting them together. Same composer has also turned in While I was walking I heard a sound… (SB 001), which is far more elaborate as it involves no fewer than three choirs of human voices, and nine solo singers who have to be positioned carefully around the balconies of St Ignatius Cathedral in San Francisco. The resultant acappella (and completely wordless) harmony-clusters are certainly charming enough, although not quite full of the microtonal glories I associate with György Ligeti. Again, the work seems to be all about form, and acoustical qualities; and despite the ecclesiastical setting, Masaoka’s concerns are not in any way aligned with ‘holy minimalism’ or spiritual content. However, the music certainly connected with Margaret Leng Tan in NYC; in this work, she finds echoes of Hiroshima, 9/11, birds, bees, and the sensation of descending into the abyss.

Swiss improvising duo Diatribes joined forces with Dragos Tara and Piero SK to record L’Instant D’Après (INSUBORDINATIONS INSUBCDR03), a percussion-heavy set of recordings made in Lausanne and Geneva earlier this year. The bass player contributes some memorable groanages on ‘Le Mauvaise Oeil’, and the sax player adds his bitter wailings to the fourth track, which is an extended lament about the failings of democracy. There’s a laptop player somewhere in these murky effusions, but it’s the drummer Cyril Bondi who seems to dominate most of the airspace with his thudding bass drum.

Another nice obscurity of American drone-noise on the Inam Records label was kindly sent to us by ‘RH’ of Indiana. Sujo‘s Dora (INAM 23) is a CDR in a small edition of 100 copies, with a permatrace insert depicting a sea monster from an old engraving. Four long tracks of distorted dread are set forth, using carefully controlled guitar fuzz and subdued feedback waves. Described as a ‘downer for the narcotic set’, this open-ended music can be something of a relief from a steady diet of stoner music that leans too heavily on aggressive rhythms and snarled vocals. Sujo allow you to read your own stories into their mysterious horizon-less vistas.

Joe Grimm‘s Braincloud (SPEKK KK.015) doesn’t do a lot for me musically, although I really like the title Braincloud so I just wanted to mention that. I prefer the drawings on the cover by Cybele Collins, which are quite attractive pen-stroke elaborations reminiscent of Scottie Wilson. Also Collins does some nice hand-lettering perched discreetly on the corner of the cover and it’s all printed up in a tasteful shade of bronze ink. Grimm, who also calls himself the Wind-Up Bird, says that his ‘music deals with overtones’, but I can’t find enough substance in these tasteful heat-haze apparitions that he conjures. It’s no more effective than spraying the room with air freshener.

{{{Sunset}}} is Bill Baird, who used to be a member of Sound Team. His Bright Blue Dream (AUTOBUS RECORDS AUTO 007) solo CD is a set of ten songs, whose lyrical content appears to be quite world-weary (‘Man’s Heart Complaint’) if not outright pessimistic (‘Diamond Studded Caskets’). The production method is appealing, with its layers of keyboards and drums and double-tracked voice effects that suggest a sort of klunky, lo-fi reverse Todd Rundgren. Baird’s thin and solemn voice is usually not very ‘forward’ in the mix, neither are all the lyrics audible, but his deadpan acting style shines through and adds to the bittersweet pain of these disillusioned melodies. May appeal to fans of Smog.