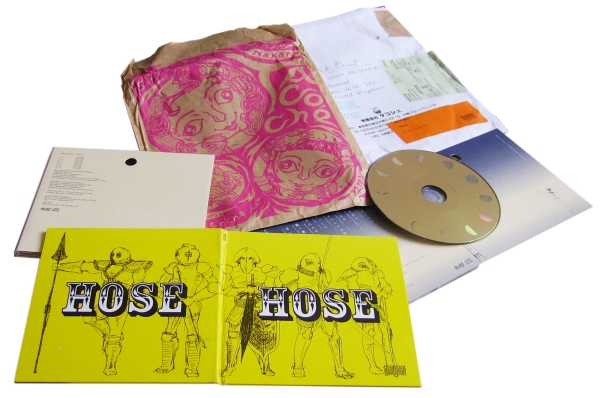 Illness, preceded by my travels beyond the seas, have kept the news of new releases at bay for a while. I want to present pictorially and verbally these three curiosities from the enchanted land of my dreams, Japan. Ayami Nakayama is owner-operator of the TACO-ché bookstore out there in Tokyo and he very kindly sent me this small batch of CDs, but he has nothing to do with the music or the record labels involved (which I think are run by friends of his). The rounded faces on his shop’s printed bags register every degree of customer satisfaction up to and including a near-hysterical joy, which may suggest something to you about the nature of the stock carried at this emporium. Adults only should visit the above link, which will widen some eyes in like manner.

Altered States recorded the entirety of Bluffs ii (DOUBT MUSIC dmf-109) in one day in December 2005, with the magical trio of players using ‘no overdubs, no edit…this is what happened in studio’. What happened was eight lengthy tunes of energetic and powerful prog-inspired free-jazz noise burst-plosions, with the three geniuses turning in plenty of evidence of their uncanny near-telepathic mode of playing to execute tight-dynamic chord changes and impossible time-signatures, sounding for all the world like a super-psychedelic version of King Crimson. Most of my Altered States records feature the original drum and bass duo doing much the same things to equally impressive effect, but the addition of guitarist Uchiashi Kazuhisa here has added new layers of mind-bending virtuosity that should make the jaws of all fans of avant-rock hit the floor in short order. The plain cream-coloured typography cover does nothing to illustrate the richness of music here. This flawless record reminds me why I started paying attention to new Japanese rock in 1995!

Outsider vocalist-wizard Makigami Koichi recorded Moon Ether (dms-107) for the same label a little later, releasing it in 2006. Inside a blue cover, a gold CD emerges decorated with the phases of the moon. It’s a record of sound poetry and live electronics, all eleven tracks made using his voice and throat, sometimes accompanied with a treated theremin. The man achieves uncanny throatal grunts every bit as powerful as the visceral eruptions loosed from Phil Minton’s belly, except that our Japanese protagonist is not attached to the school of free-form improvisation, nor is he averse to uttering inpromptu chants, prayers and speech-singing within his (sometimes overdubbed) compositions. Astonishing examples of quiet, modest miniature poems emerge, everything shot through with Koichi’s very distinctive and warped view of the world. If you want to hear something you genuinely have never heard before in your life, seek out this slice of wonderment to illuminate your inner world.

The Hose record (UNKNOWNMIX 4 / HEADZ 97) is no less disorienting to Western ears, I might add. The quintet of players – the only name among them which I recognise is Taku Unami, director of Hibari Music – turn in a suite of eccentric performances using horns, percussion, guitar and occasional vocal yawps. The gentle sound (it’s a very soft, muffled recording) and the conventional-ish instrumentation fool you into thinking you’re about to get something familiar, but that assurance will soon wear off – despite those tasteful Burt Bacharach-inflected jazz chords which open the record. As they wander down many a tangential backwater and take every possible unexpected diversion before reaching their destination, Hose exhibit the same skill for fast-changes and strong dynamics as Altered States, only in an acoustic framework. But what it all leaves you with is a delightful sense of bafflement. If you enjoy those great early Residents records that use horns (eg Not Available), then you are in for a massive treat here. Poetic absurdist titles such as ‘Would you mind being re-animated’ confirm the playful genius at work here, as does the Surrealist landscape printed inside this package which happens to be one of those miniature gatefold LP replica sleeves which the Japanese do so well. And as you can see from the front cover, Hose perceive themselves as warrior-soldiers enlisted in a very peculiar private army. Composed by Unami and released in 2007, this record is something worth getting out of bed in the morning for, a real ‘Excuse To Live’.