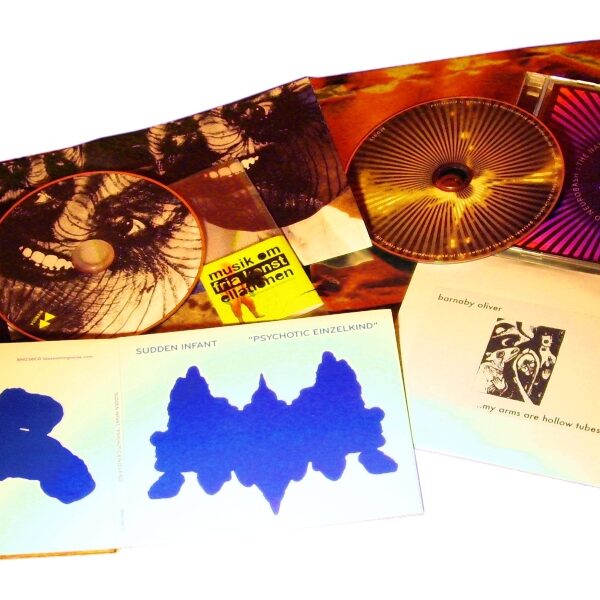 Ralph Lundsten is the Swedish electro-acoustic maestro who followed his own distinctive musical path for a long time, producing some excellent LPs for Sweden EMI from at least 1968 onwards (if not earlier). His 1972 LP Fadervår is a personal favourite, imbued with much holy mysticism and ethereal sonic episodes. One of his abiding themes, an interest in the cosmos and the metaphysical nature of the globes, continues with this new release The Naked Moon and The Virgin Sun (ANDROMEDA MUSIC AB ACD 53) which has been realised as a collaboration with Neurobash. While nowhere near as crucial as his earlier work, this outer-space epic does contain its fair share of intrigue and Tangerine Dream-styled electronic meandering that will offer no small appeal to contemporary ears. It’s partly intended to showcase contrasts between analogue and digital production methods; no prizes for guessing which artiste represents which school of thought! Packaged in a plastic bag so as to resemble a carton of nutritious space food, this record will sustain you on your next voyage to Neptune.

Equally ‘kosmische’ although in a more self-consciously psychedelic vein, we’ve got the latest long-player from insane Swedish collective Fria Konstellationen. Musik Om Fria Konstellationen (REV/VEGA REC RVR004) delivers three extended workouts of dense, swirling dronery and ceremonial percussive and electronic mayhem that, at times, can run rings around a hundred holy madmen from the contemporary American free-folk and strummery school. My particular attraction to their cluttered sound is that the edge of serious menace is never very far away, even during the most uplifting moments of cosmic chaos.

Barnaby Oliver is a UK artist now based in Melbourne, which is about the most English of all the major Australian cities. My Arms Are Hollow Tubes (UNSTATES UN02) is his proud boast, a condition which to some might be deemed an affliction, but in Oliver’s line of work it’s clearly a boon. This barely-existing CDR is a collection of layered improvisations made from stringed and percussion instruments, which have been reworked after the fact; on the opening cut, the recordings have been remade into an intense and feral noise, but this is untypical of the remainder which is more reflective and wistful. The man’s got a talent for stumbling across some beautiful invented melodies, such as the melancholic ‘Morning of the World’. With sleeve art by Nikki Askins, a Welsh draughtsperson, this charmer proposes a not unattractive way to greet the new day.

Sudden Infant delineate hellish states of mind with Psychotic Einzelkind (BLOSSOMING NOISE BN036CD), a very lively and focussed set of exercises in percussive and electronics-driven noise-rock. Its undeniable variety means you genuinely don’t know what to expect from one track to the next, and while some of the buttons they push may be somewhat familiar (roaring table noise, or the suggestions of unholy nightmares to trouble an already troubled soul), this record is packed with startling originality from Joke Lanz, Bill Kouligas and Christian Weber. With three bonus remixes by stars Z’EV, Thurston and Lasse Marhaug, you know you’re in a safe pair of hands (especially if you’re after a lasting bout of eardrum damage). The cover art is almost a Rorschach inkblot test image; I’m reluctant to reveal how my twisted mind interprets the blot, but be sure to let me know your own impressions.