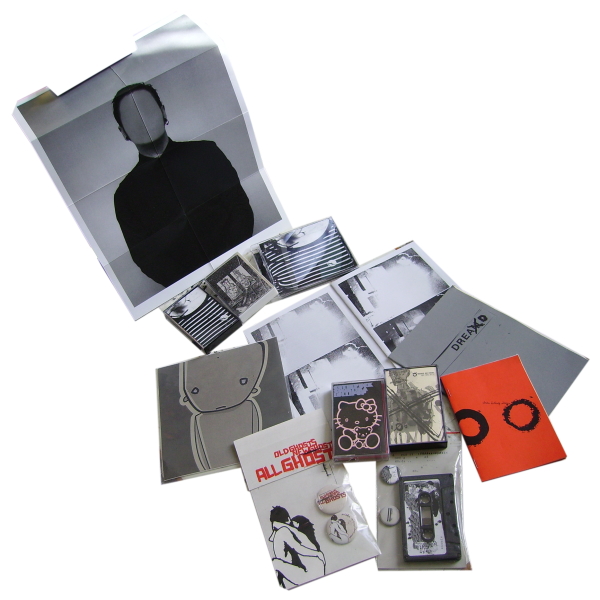 All the above sent by Thomas Ekelund from Gothenburg in Sweden, sound artist and graphic designer whose excellent project Dead Letters Spell Out Dead Words released a CD on the iDEAL Recordings label, reviewed in TSP16. Cassettes, CDs, split singles, fanzines include Fall Fall Falling (on both cassette and CD), issue #7 of Peter Henning’s Namenlos art zine, a promotional CDR and booklet package for Thomas’s work called Dread!, a split seven-inch he made with with Modern Art, an ‘old school ritual industrial’ cassette by Trepanneringsritualen, plus a poster, buttons, etc. Nothing here has been heard or read by me at time of writing, but fortunately Thomas included a three-page summary of everything. Allow me to précis just two of his descriptions:

“The sub-underground in Gothenburg is bustling with activity. It might be a reaction to all the happy-go-lucky, let’s-hug-and-be-friends, hippy attitude that’s run rampant on the “scene” for the past few years. There was bound to be a reaction. Cutiefuck (split cassette with Trite Meat, Swastika Lollipop / They Are Diseases) might seem cuddly and fun, due to their healthy obsession with Sanrio in general and Hello Kitty in particular, but believe us when we say that is far from the truth. Too lazy and/or stoned for harsh noise, their side of this cassette presents some fine slacker drum machine through guitar amp scum noise…Trite Meat seem to go for benzo pills and rohypnol. Their side is a dark, menacing misery (as opposed to joy) ride through a collapsing psyche. Sonically that means an unholy mess of harsh noise, classic Swedish industrial and the weirder side of black metal.”

“Marhaug / Bad Kharma, Red Tape Rot 6 cassette. This release manifests the reunion of the undynamic duo of Marhaug and Norway and Bad Kharma of Sweden. The Red Tape Rot project was initiated in 1999 when [Ronnie Sundin] was spending an academic year in Trondheim…the original plan was to record 10 cassette albums over the course of that year and have them released on different labels all over the NOISE globe. Each album was to sound different from the others or were based on a singular concept: full blast, only turntables, use a Sony Playstation as sound source, silence, etc. After five albums were completed (of which the last one – the silent one – was never officially released) the duo got a bit tired and hungry and agreed on a lunch break. After lunch they decided to take a nap…now after some nine years or so they are back with the hope to complete the series before it’s time to take a break for tea!”