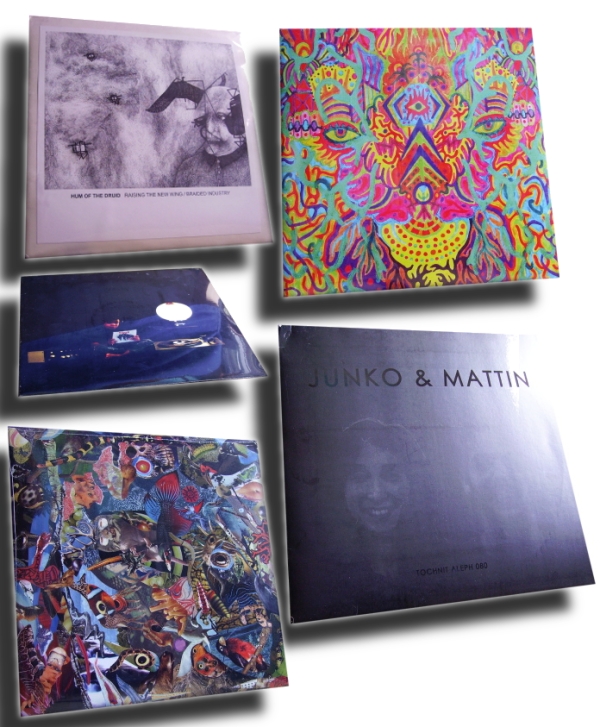 Five vinyl full-lengths here for your perusal…haven’t heard them yet, this is mainly just to let you know they exist. Got a couple of recent releases from the German Dekorder label, both representing work from the Finnish underground. Hevoset‘s eponymous LP (DEKORDER 024) has the brightly-coloured painting of the enlightened magic visage by Jani Hirvonen, who is Uton. He teamed up with fellow Tampere-based musician Jan Anderzen (from Kemialliset Ystävät) to make this LP, which is apparently filled with much ‘rural psychedelia’. Uton also made Straight Edge XXS (DEKORDER 025) and decorated same with an elaborate collage cover.

Nice parcel from Basque experimenter Mattin bringing me up to date with his multifarious activities. If you have been following his recent endeavours you’ll know he’s becoming increasingly strident in presenting his extreme Marxist polemic through music, song and noise. The new LP by Billy Bao continues this line of attack, starting with its confrontational title Dialectics of Shit (PARTS UNKNOWN RECORDS PUR 032), and song lyrics such as ‘Get killed by a system that only wants you as a fucking corpse’. There’s also a song about a factory of repression. Mattin plays the guitar, Bao sings, and they are joined by Xabier Erkizia and Alberto Lopez. Haven’t heard the racket made by this two guitars and drum kit set-up, but anything with a song called ‘Basque Blues’ suggests they’ll behave like an avant-garde version of Jon Spencer Blues Explosion.

Mattin‘s other vinyl release is a team up with Junko, the Japanese lady who screeches. Junko & Mattin (TOCHNIT ALEPH 080) appears at first glance to have an all-black cover, but this is not the case. Two portraits, both faces registering a rather mirthless grin, are printed in very low-key shades of grey and the LP title and catalogue info are overlaid in ‘clear’ typography. The LP contains two side-long cuts, ‘Stop it’ and ‘Too Late’, both utterances which I anticipate will shortly be in my own mouth when I commence playing this noiseter-oonie. I haven’t heard from the Tochnit Aleph label in some time; they have been home to some of the most obnoxious and vile noise records ever made, which is probably a good thing.

From Kalamazoo USA, Mr Patrick Yankee has sent the LP by Hum of the Druid called Raising the New Wing / Braided Industry (SNSE 072). Hum of the Druid turns out to be a solo turn by Eric Stonefelt, whose work I only know through a single striking contribution to last year’s Untitled box set (jointly released by Public Guilt, Epicene and Underadar). ‘Crackling modern industrial music’ is what we’re told to expect from this release, and the sound was generated from processed acoustic sources (vibrating metals and vocals). The cover art drawing, also by Stonefelt, is pretty fine…drawn in an old-fashioned stippling style which I thought had disappeared in the late 1970s, it makes surreal connections between birds and WWI fighter plane parts which appear to be invading the head of a man, stoically accepting his bizarre arial fate. Nice package for this 400-copy limited LP; there’s a poster and cardstock insert, and the cover artwork is tipped-in by hand. Many thanks to Patrick for sending this.