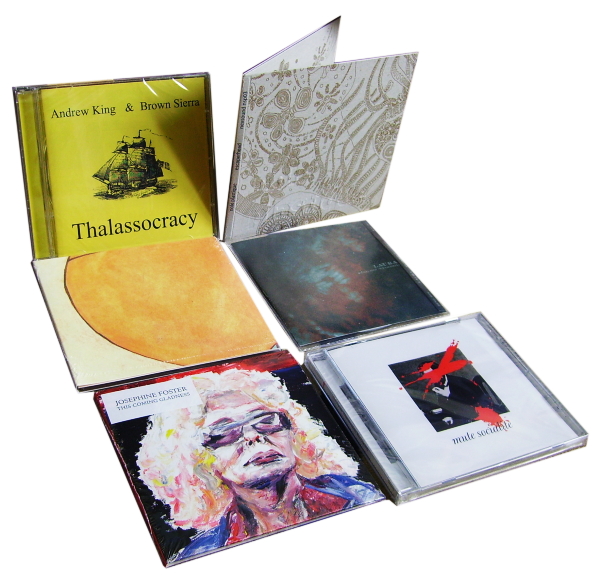 Nole Plastique‘s Escaperhead (NEXSOUND NSP03) arrived from the Ukraine on the reliable Nexsound label. Nole Plastique are a Russian electro-acoustic duo of Roman Kutnov (the founder member) and Aleksei Belousov (a recent collaborator), who have been generating ‘romantic noise’ since 2004. However on this, their first full-length release, they’re apparently experimenting with song-form and a ‘very raw’ production technique. Should be interesting to hear how these two aims match up on a song like ‘Tired fingers, waste your glory’. I’m often wasting my glory with my tired fingers, if you know what I mean. Curious listeners may wish to locate a couple of net releases by this band, housed in the Internet Archive’s Audio section here and here.

Josephine Foster sings This Coming Gladness (BO WEAVIL RECORDINGS WEAVIL 31CD), a CD of ten songs from this Colorado-born singer and string player, on which she’s joined by the guitar of Victor Herrero and the drums of Alex Nielson. I’ve never heard anything by this performer who started life in Born Heller and has since pursued a solo path, sometimes accompanied by The Supposed. It’ll be interesting to hear her personal update on Appalachian ballads here, but she’s also drawn inspiration from gospel music and the blues. Apparently her somewhat mannered soprano voice takes a few unprepared listeners by surprise. Quite a cover painting…it makes her look like Joni Mitchell as rendered by John Bratby.

Andrew King is an English folk singer who has done some amazing things during his sporadic recording career. An intelligent and well-informed scholar of English folk song (its sources, its singers, its history and its recordings), he has cultivated certain long-vanished mannerisms in his own voice to express some sort of continuity with the past, and show solidarity with those singers whom he admires. In June he sent me Thalassocracy (EPIPHANY 05), which he describes as ‘my new, rather “difficult” album with Brown Sierra’. As the maritime cover will clue you in, all 13 songs are sea-faring ballads such as ‘Banks of Green Willow’ or ‘The Dark Eyed Sailor’, mixed with sea shanties and broadsides based on historical events, such as ‘Nelson’s Death’ or ‘HMS Advance’. (The title is a little-used Greek word which approximates to ‘the rule of the sea’). I’m expecting some pretty heart-rending tragedy when this is spun, and I’ve no doubt that Andrew King’s unadorned singing will do justice to the task; in traditional folk song, all the emotion should be within the content, not the performance. It’ll also be interesting to hear what Brown Sierra, who I normally associate with live electronics, contribute to this collection of traditional music. NB: this self-released record is only available from Andrew King via PayPal (price £10, plus £1 for non-UK customers); email him at andrewstewartking@hotmail.co.uk

Benjamin Wetherill‘s CD Laura (RED DEER CLUB RDC 014) is another release in the ‘folk idiom’. This Leeds-born guitarist and singer has been performing for ten years and was recently noticed by the songwriter from A Hawk and A Hacksaw; through that contact, this record was enabled, and was recorded outside of Budapest, with the help of the Hun Hangar Ensemble.

The Mute Socialite CD arrived from America. More Popular than Presidents and Generals (DEPHINE KNORMAL MUSIK DKM09) features the drumming and guitar work of madcap US enthusiast and polymath Moe! Staiano, whose solo percussion record was noted in a previous issue; from what I recall he’s extremely energetic and athletic, but his music didn’t quite measure up to all the bravado and boasting. I’m prepared to give his music another chance though, as Liz Allbee plays trumpet on this, and I have enjoyed her very weird solo record for Resipiscent and her work with Mark Gergis. This five piece, also featuring Ava Mendoz on guitar, have been performing around the West Coast area since 2006, and their debut CD was released by Mr Staiano on his own imprint.

Toshimaru Nakamura and English (ie Joe Foster and Bonnie Jones) made One Day (ERSTWHILE 053). The back cover features an intriguing drawing (by Erin Womack) of an old man holding a large cabbage and poking the ground with a green stick. The ground, presumably dry and dusty, is cracking open at an alarming rate. Yet he appears largely unmoved by the strange resultant phenomenon. Foster is a Portland-born improviser who has lived in Korea the last six years; conversely, Bonnie Jones was born in Korea but was brought up in New Jersey. Presumably her circuit boards will make the perfect instrument to accompany Toshi’s no-input mixing board feedback work.