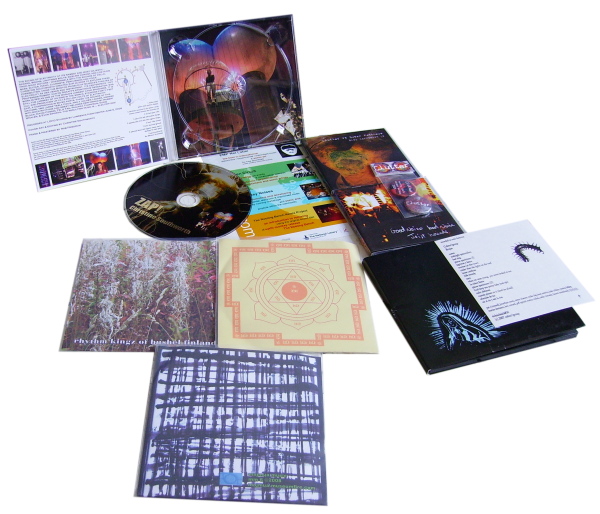 These two mini-CDs, both pretty interesting, are the first catalogue numbers from a UK micro-label Earth Monkey Productions in Cumbria; have a look at their website for further affordable goodies, which will probably disappear quite quickly as their editions are tiny. Clutter vs Susan Matthews have their Slow Corrosion EP (EMC002), which is kind of like noise electronics in places influenced by dub music techniques. Good Noise Bad Noise released Joist Hounds (EMC001), which is a nice combination of two guys with laptops and one other guy with a violin; some of these cuts were originally broadcast on The Download Show for Oldham Community Radio. 80 copies only of these wee gems, and nicely packaged too. The label supports local experimenters in a good way, and the website will also lead you to their net label, where you can freely download some music licensed under Creative Commons.

Got three more CDs from the Majmua Music label, which is an offshoot of Fire Museum Records in the US; so far it’s been very hit or miss in its quality control. Solar Dynasty‘s Arrows in the Quiver (MM-4) is four guys blowing noisy free jazz with tenor and clarinet; the seven tracks here sound like they’re cut from the same long session, and were recorded in a closet. Rhythm Kingz of Bushel Finland (MM-5) is a trio of Finnish fellows, mostly playing 12-bar blues or campfire songs on acoustic guitars; some of the recordings have a slightly unusual edge, but the point of this release eludes me. The Sonarchy Trio play Sonarchy 1998 (MM-6), which they recorded in Seattle; Carla Kihlstedt, Gino Robair and Matthew Sperry manage some decent skittery acoustic improv on this, working with strings and percussion. Sperry died in 2003, and the release is dedicated to him.

Cobra//Group recorded Brujas (SICKSICKSICK#30) around Albuquerque, apparently working only in total darkness. I have no idea why they would want to tell us this or how it enhances the music, but it does add something to the mystery of this large experimental band of which even the core membership is unclear. In fact, for this project it seems that total strangers could walk into the darkened room and contribute. If any of this leads you to expect a commune-collective styled freak-out with bongoes and flying hair, you might be surprised by the low-key acoustical offerings on the record – mostly acoustic, quiet, and very uncertain.

Christine Southworth sent a copy of Zap! Music for Van de Graaf Generator, Tesla Coils, Instruments and Voices (NO NUMBER CD). A seven piece of lively players and singers, including members of Bang on A Can All-Stars, play Ms Southworth’s varied compositions (she seems at home with everything from rock to jazz and ambient drone) with brio, while the electronic music components required a man to climb up a ladder to produce lighting and static from the 40-foot generator and coils. Colour photos inside the CD gatefold make it look like everyone was having crazy fun. The music is very amiable and entertaining, but not enough wildness in the electronic sounds for me.