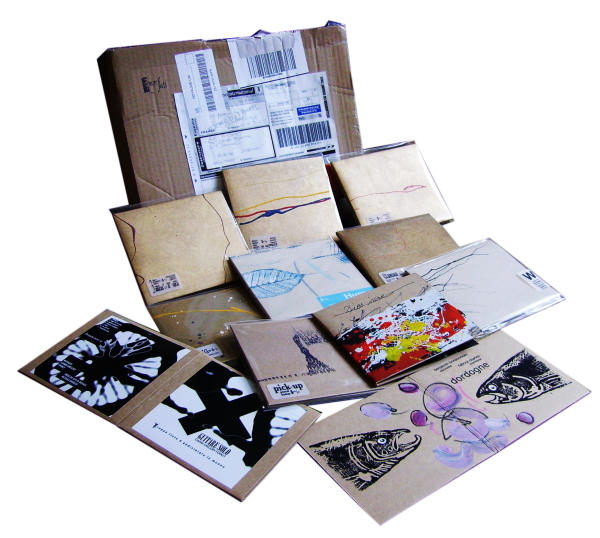 Amor Fati is a French record label operating out of Bordeaux since 2003. Mathieu Immer kindly sent us a generous boxload of releases, which may represent a good chunk of the improvised music and free jazz available on this label. Only had time to skim a couple of ’em…Bejamin Bondonneau and Fabrice Charles recorded Dordogne (FATUM 011) in situ at various points along the river of that name, during the Autumn of 2006, producing nice effects from clarinet and trombone in the open air and plenty of fish imagery on the cover. Make mine mackerel! … Gianni Grégory Fornet‘s solo guitar record is Troppo Tintu è Addivintatu lu Munnu (FAUTUM 010), and while he’s no Fred Frith I guess his half-baked attempts at atonal, spiky improvising are preferable to his more ‘tasteful’ modes. He’s skilled, but mainly as a pasticheur. … Nice to see another release from Jean-Luc Guionnet, who’s a very fine sax player and occasional organist of no mean talent. He’s joined by the bass player Benjamin Duboc for W (FATUM 012), a single-take 40-minute improvisation of incredible quietness and emptiness, interrupted only by perplexing creaks and plops. Talk about your minimal improv…even Another Timbre Records would baulk at this one. If you want something a bit more maximal, then you could spin Sylvain Guérineau‘s Dies Irae (FATUM 013), an epic solo workout for which he provides music and painting on the cover. His work on the alto and baritone saxes is hearty and full with plenty of overblowing and ‘shouting’ into the mouthpiece, in the style of Afro-American free jazzers, although Sylvain’s take on the style is much more intellectualised; I don’t really hear a ‘day of wrath’ so much as a slightly-piqued grumble, but it’s a good rich sound (no doubt because it was recorded in a church). Also in the box, albums by Paul Rogers, Trio De Batterie, 3 Rocks and a Sock, Pascal Battus, Free Unfold Trio, and something called The Gernika Suite by Ronnie Lynn Patterson and Didier Lasserre. As you’ve probably noticed, the covers for these are all handmade, and Mathieu Immer assures me that this makes every single one a potential collector’s item. Maybe. Most of them simply have streaks of paint dribbled across the boards, producing none of the pent-up fury of a Jackson Pollock, but simply creating a banal and decorative effect. As for the other sleeves, they’re pretty, but frankly I’ve seen more interesting images on the hand-painted coasters sold by the woman who sits outside Brixton station.