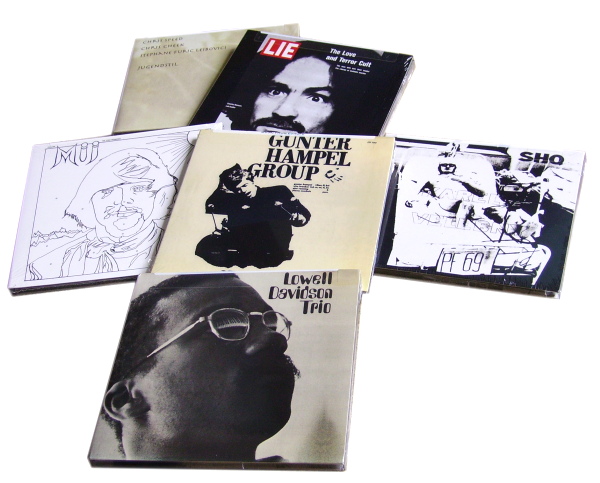 Here are six new hot items from ESP-Disk’ in NYC, five of them reissues from their back catalogue and one example of contemporary jazziness. I have never counted myself any kind of ‘expert’ on this recondite label but yikes! – so much of this stuff is completely new to me – I never even knew they’d issued it. On the free jazz wing, we got Lowell Davidson‘s Trio (ESP 1012) which is a 1965 session where the pianist is taking up arms against the drum kit of Milford Graves and the bass of Gary Peacock. Davidson’s work, recommended to the label by no less than Ornette Coleman, is quite new to me but is compared favourably with Cecil Taylor. We’ve also got the Gunter Hampel Group with Music From Europe (ESP 1042) with some 1966 recordings made in Holland – perhaps not unsurprisingly, the excellent sax blaster Willem Breuker is featured heavily. I’m very keen on his 1970s records he made with his groups and I think this 1966 sesh will be the earliest thing I ever heard from him. Further European free improvisation stylings on SHQ (ESP 1080) from Karel Velebny and his men, on a recording made in Germany in 1968. The madcap titles, and inexplicably strange cover art, raise my hopes regarding this one’s score on the zane-o-meter.

Zane. As you all know ESP-Disk’ had quite a reputation from taking chances with peculiar and far-out recording artistes. I guess MIJ, also known as Jim Holmberg, will reveal himself as one such on Yodeling Astrologer (ESP 1098). Originally issued as Color By The Number, the album comprises nine songs by the man, his voice and his guitar, recorded in less than three hours in a NY studio. MIJ was one of the ‘discoveries’ of label boss Bernard Stollman. Can’t wait to hear if ‘Martian Love Call’ is every bit as fried as it promises; recorded in 1969, this could be a document from the darker side of the hippy psych. Which brings us to Charles Manson Sings (ESP 2003), the record of songs which he recorded in 1967 and 1968 in Beverley Hills with backup singing from the women in his ‘family’. I have never pursued anything to do with the Manson myth with much enthusiasm, but it looks like my job now requires me to expose myself to his music. Originally out in 1974, this reissue has been expanded to 26 tracks. Lastly we have Jugendstil (ESP 4048), credited to Chris Speed, Chris Cheek and Stephane Furic Leibovici. One sax, one clarinet and a double bass on these 2006 recordings, compositions by Leibovici.