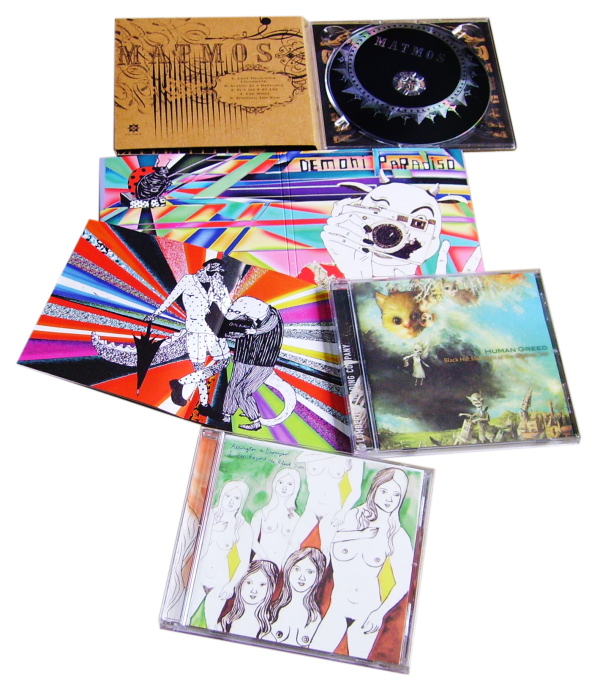 Matmos are the San Francisco duo of intellectual-avant electronica music, here with a rather lavishly-packaged record called The West (AUTOFACT FACT06 CD) which arrives in a quadruple-gatefold digipack. Also out as a double-LP, it’s decorated with the faux-old style typefaces which a graphic designer usually reaches for when pressed to convey the idea of ‘olden days’, which here may mean anything from the Old West to a Victorian sewing parlour. Inside we spy at least one photo of a man with a cowboy hat and another drawing a six-shooter. Spin the disk for a many-layered and charming experience of cleverly-arranged electronic shards and fractured micro-beats, on five tunes recorded and arranged sometimes with the help of some big-name guys, including members of Tortoise, Slint, Palace, Swans and Neurosis. With track titles like ‘Last Delicious Cigarette’, they aren’t exactly tramping on the same turf which Earth have tried to annexe into their world-view (e.g. the Hex double LP), but this is shaping up to be a very nifty collection of studio concoctery.

I See Beyond the Black Sun (KLP200) is an item of extremely distinctive bizarritude that warrants close auditioning from the thinking lugs of any discerning reader…Arrington de Dionyso is using his bass clarinet and wild throat-singing methods to say something about primordial mankind’s existence, with faux-primitive cover art that renders nude ladies in a coarse and capable painterly style that attempts to blend cave painting with modernism in ways we haven’t seen since Picasso first clamped his rookers on an African mask in Paris. It ain’t the cover of Electric Ladyland, that’s for sure! With an endorsement by Michael Gira (no less a man), this honking hooteroonie is the droningest dreamtime-inspired piece of ethnic nightmare I’ve heard this year. With some connections to his former post-punk band Old Time Relijun, this is sufficient to make you wanna investigate Dionyso’s previous solo effort, the 2006 album Breath of Fire.

From the label Lumberton Trading Company we have Human Greed, with a CD called Black Hill (Midnight at the Blighted Star is its subtitle) (LUMB011). With a wealth of mixed messages on the detailed and highly-rendered symbolic cover paintings (Louis Wain meets John Martin by way of Tim Burton’s animations), there’s no denying a strong whiff of the English Gothick on this album of ‘melancholic extremism’, as it has been described by other men’s lips. A few tracks spun so far reveal something more delicate than Bauhaus, though; a wispy, fog-ridden and menacing electronic ambience abounds, mostly the work of Michael Begg with the help of a few friends and collaborators, including David Tibet, Deryk Thomas, members of Blind Cave Salamander and even a former member of folk-prog 70s outfit Mellow Candle. It’s a good wintry chiller album full of black atmospherics.

For further chilling sounds, you may want to bend a frozen ear towards Demoni Paradiso (12 TONAR 12T047), made by a quartet of well-known Icelandic electronica artists who call themselves Evil Madness for this project. BJ Nilsen is one of them, Stilluppsteypa is another. Record does boast a nifty colour cover of demonic joker in military uniform taking photos (and there’s a booklet inside filled with even more of these illogical cartoony scrawls and computer collages), but I can’t find much substance on th’ disc with its drifty, meandering cuts. Some of them have beats and rhythms and thus bring the record’s sound a shade nearer to the ever-familiar Krautrock and progrock touchstones (as the press release would have us believe); those without rhythms are just empty, vapid soundscapes. I wish there were some genuinely evil madness going on here, but these northern wizards are proving to be mere mountebanks.