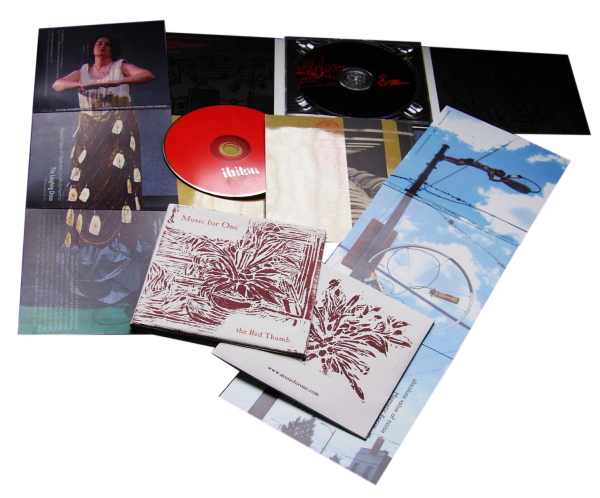 From Vancouver in Canada we have a couple releases described as ‘experimental noise works’ and attributed to Absolute Value of Noise. On Magnetic Focus, we have eight recordings based around a wire coil antenna and a receiver, picking up VLF frequencies generated by lighting, power lines, mobile phones and computers. Am I imagining things, or didn’t Disinformation explore this possibility quite thoroughly in the mid-1990s? Joe Banks arguably ended up with more powerful recordings than this Canadian project, but there is still a very good mesmeric charm to these inert buzzing snakes of electricity uncoiling in their slow, purposeless manner. The impossible image on the foldout cover is by Uskalla, proposing something halfway between performance art and urban installation (and perhaps enhanced in Photoshop also). If you require something even more preposterous, play The Laughing Dress, a collaboration between this project and Lori Weidenhammer. This recording, again sitting somewhere in the interstices between performance art, poetry and dramatic recit, depicts episodes in the life of a mermaid called Melusine. And uses sounds derived from her gigantic scaly dress, which was constructed especially for the occasion with the help of Canada’s Council for the Arts, who sponsored the video version of this work. The oceanic backdrop sounds on this one are pretty compelling, but I found Lori’s solemn and symbol-laden intoning pretty tough to sit through.

Quite nice guitar playing on the resonator guitar from Music For One (i.e. Canadian player Sherry Ostapovitch), on a CD called The Red Thumb (PERENNIAL SOUNDS PS001). It arrives in a sumptuous handmade art package printed (perhaps with linocuts, or very chunky screenprinting) on tactile art paper. I’m interested to note that Sherry has played with English improvisers Lol Coxhill, Steve Noble and John Edwards. And one of her track titles, ‘Circadian Rhythms’, matches the name of a 1970s INCUS LP. There is certainly an open-endedness to her style that might fit nicely alongside the work of those free players, although her sound is so gentle you wonder how she competes with the barking sax of Edwards when he’s in full mad-dog mode. So far I don’t detect any self-conscious nods in the direction of John Fahey either, which I must certainly reckon as a positive boon. Her playing method derives from natural rhythms of the human body, a strategy which aligns her with Pauline Oliveros, Rev Dwight Frizzell, Evan Parker, Dave Knott, and many others.

An insanely reduced piece of minimalism is this from Ibitsu, called Foolproof Betters Fools Bettering Foolproof (EDITIONS MEGO DEMEGO005). Even at peak volume, I can’t hear anything going on for 24 minutes apart from a vague, muffled murmer which might be a midget walled up inside a cupboard next door and struggling to free himself from his bonds of leather. ‘Demands total attention,’ we are informed, ‘as well as playback on correct speaker systems’. Hmm. How are we to know if they are correct? This oddity comes from somewhere in Japan, and is decorated with numerous mysterious images of casks on the cover. An empty barrel makes the most noise…or in this case, no noise at all.

Oldman‘s Two Heads Bis Bis (LOW IMPEDANCE RECORDINGS LOZ 14) is a lugubrious affair sent here from Greece. Charles-Eric Charrier performs here with the help of drummer Ronan Benoit, and others, and a thoroughly deconstructed rock record is arrived at through the use of bass and electric guitars, many layers of samples and voice recordings, and a determination to keep everything even more sluggish than a record by Les Rallizes Denudes. The drumming is so loose and all over-the-shop that it appears to have been recorded on another planet. In these dense constructs, Charrier is also attempting to layer in fragmented narrative elements to produce some form of twisted poetry, a twisted fairy story, and images of alchemical processes we can grasp at. The gatefold package for this one is extremely powerful, an all-black foldout affair with clear-ink overprinting to conceal graphically strong, linear images packed with strange symbols, urban scapes, and severe weather effects.