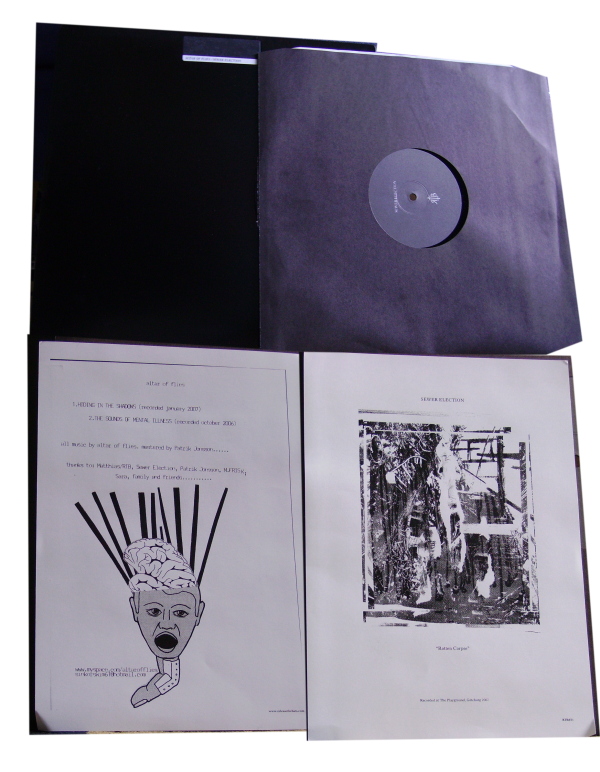 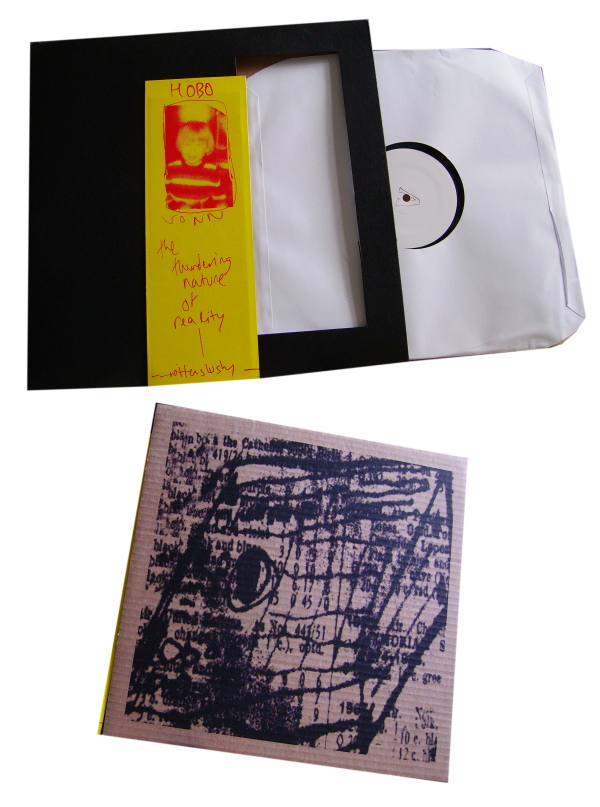 These four Vinyl Voltroons certainly pack quite a few heavy electronic punches as they step up to the collective megaphone. Firstly, from the UK we have Hobo Sonn with The Thundering Nature of Reality, a great limited-press slabamaroo of which only 125 copies are currently grabbable from the ROTTENSLUSHY label. Both sides reveal a fascinating exploration of controlled feedback, reverb, and other juicy effects, all managing to sustain a compelling mood with the skill of a chef simmering his meaty broth. The finished sounds are indeed almost edible – crunchy and savoury as they wriggle excitedly between your teeth. Note also the slightly oversize cover, with a hand-cut window mount which reveals a corrugated card artwork within. Nifty! Many thanks to Ian Murphy for sending this.

From Sweden, land of the dark creatures with their mad staring eyes, we’ve got two lengthy sides of unholy racket on this split monster from the Release The Bats label, its all-black sleeve and all-back inner bag enhancing the grisly sensations of inky darkness that pour off the grooves of RTB#31. Altar Of Flies contributes ‘Hiding in the Shadows’ and ‘The Sound of Mental Illness’ to this split LP, while Sewer Election takes about twenty minutes to delineate, in sound, all the festering unpleasantness of his ‘Rotten Corpse’. Both of these Swedish croinksters are exceptionally fine operators in the worlds of piteous, claustrophobic and cavernous doom, and provide powerful listening experiences for the body and brain. Heard Sewer Election on the Gothenburg 08 sampler this year, and Altar Of Flies has made a terrific scorching seven-inch for Daisy Cutter Records in the US.

Likewise from Sweden, a superlative release from Dead Letters Spell Out Dead Words. Lost in Reflections (FB008 / iDEAL060 / RTB#42 / WSAG #21) takes, as its physical manifestation, the form of an LP with a seven-inch which is intended to be heard in the correct sequence as a single musical statement. Plangent studio-based guitar and effects recordings, in multiple overdubs, produce some of the most intensive and incredible slow drone sounds you’ve ever heard. Read the insert for a startling confessional text from its creator, Thomas Ekelund, but no matter what he tells you about his psychological condition nothing will prepare you for the ever-changing slew of emotional experiences that this work dares to unleash – veering from the ecstatic to the suicidally miserable, with a range of new and unknown emotions in between. Ekelund’s painful personality dilemma is also expressed via the stark monochrome cover image, itself a pastiche of a well-known surrealist image. The sensitive listener had best be prepared for a record of relentless passion and power, yet its music is unspooled in a deliberative and contemplative manner. Chillingly beautiful! No wonder it took four record labels to release it… Lastly a fine split LP (COMMUNITY COLLEGE 030) of fatal noise and deadly electronics, sent from the Community College Records label in Toledo Ohio. The B-side is given over to Wasteland Jazz Unit, a collective who have collaborated with Burning Star Core and who run a DIY venue in Cincinnati. Their brand of sparky racket is absolutely sizzling, but it’s the A-side which is offering more in the way of intrigue and quizzical eyebrow-raising for this listener. Subdued, mysterious and stark, Cardboard Sax have a threatening edge to their sound that plays havoc with my nerve endings like a sort of metaphysical Jack Frost. This trio features members of Uneven Universe and Haunted Castle, and John Olson of Wolf Eyes / Dead Machines. The cover art by Jason Zoh is darn fine too, with its agonised morphing faces on one side and horrifying Rorschach blots on the verso, all rendered in no-nonsense blacks. The duck-billed platypus in the corner is, I assume, the record label logo.