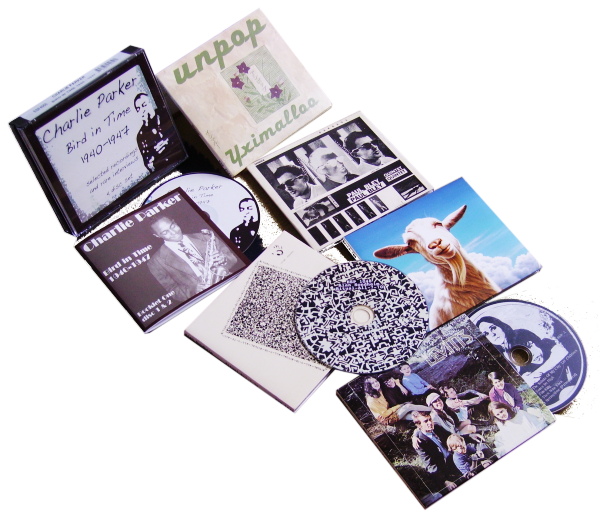 Plenty goodies arriving from the ESP-Disk’ label this season, the recent batches containing an unusual mixture of free jazz, be-bop jazz, reissues of weird stuff and new signings to the label…thus confirming the label’s reputation for fairly wild eclecticism. The Charlie Parker four-CD box set is quite fascinating, even to this listener who can’t decide if he really digs Bird or not. Bird In Time 1940-1947 (ESP 4050) is a compilation of radio performances, demos, sessions and otherwise lost music some of which never made it into a recording studio at the time, peppered throughout with interviews with Parker, Max Roach, Milt Jackson and other contemporaries. ESP originally whacked some of this material out as vinyl LPs, original issues of which are quite rare; I think one edition had a 35mm slide inserted (why, I don’t know!). While at first sight this comp may seem kinda esoteric and only of appeal to mouldy figs who own versions of every single Parker side ever recorded, actually it’s a very compelling listen – surprises at every turn, like tuning in to a radio show from the past, where the signal quality may not be great but there’s enough information getting through to keep your ear twitching. The muffled sound quality also does something to leaven the sometimes slightly aggressive tone (for me) of Bird’s alto.

Paul Bley Quintet’s Barrage (ESP 1008) was his 1964 debut recording for the label. This white piano player had enough smarts to pick Marshall Allen (one of the Arkestra’s principal men) for alto duties and the uncanny free drummer Milford Graves for the stick work, although Dewey Johnson’s fine trumpet work is also showcased. Six cuts of fabulously intellectual New York sixties jazz emerged, the faster numbers owing no small debt to Ornette’s late 1950s work, but ‘And Now The Queen’, a slower and more mysterious number, provides ample evidence of the complexities of this new emerging language. Note the classy Michael Snow artwork on the cover, using negative prints and even incorporating one of his own paintings.

Alan Sondheim is an American polymath who caused many a furrow to appear in my surprised forehead when I first spun The Songs, his ensemble’s debut for the Riverboat Records label reissued by Fire Museum some 2 years ago. Ritual-All-7-70 is from the same period (1967), and I’m delighted to finally get a chance to hear it (never seen an original vinyl except in the collections of hard-core ESP collector freaks). Where The Songs was a loud all-out session of untamed wildness in instrumentation and voice, this record is more about making interesting combinations of rather unusual instrumentation, and arriving at very pleasing sonic experiments. There is still the free-blowing inflected influence present in the work of the horn players, and the weird warblings of vocalist Ruth Ann Hutchinson, which is why this work has often been branded a classic of early free improvisation from a country which hasn’t always rushed to welcome the genre with open arms. Sondheim, the visionary leader from Providence in Rhode Island, plays stringed instruments, woodwinds, and percussion across these 13 tracks of sumptuous loopery. He’s still making records today of his unusual guitar work, and was interviewed in Bixobal magazine.

Levitts sit there photographed in a sunny park for the cover of their 1968 LP, We Are The Levitts (ESP 1095), looking for all the world like a slightly sinister version of The Brady Bunch. They play a mixture of ‘jazz, pop and bossa nova’ according to the cover sticker; it’s mostly a collection of inoffensive soul-lite songs, packed with upbeat lyrics about birds, children, sunshine, and candy, and backed by jazz-lite musical backdrops, except for cuts like ‘Fun City’ where the band are trying to ape the bubblegum sound of Kasenatz-Katz about two years too late to cash in on that bandwagon. A real charmer and an oddity from the catalogue which I never heard of before, but I would hesitate to characterise it as ‘New Weird America from 1968’ as the label apparently claims; not a whiff of anything remotely strange emerges from the minds and voices of the utterly wholesome Levitts. These reissue jobs by ESP are getting better all the time; all the artworks for this one, including a poster insert, present the original typography and layouts in almost unadulterated form.

From the contemporary wing of the ESP signing department, we have Barnacled, a large combo from Rhode Island who have recorded Charles (ESP 4049), an album of very quirky instrumental music; it sounds like the sort of circus-styled big band jazz that I thought had become passé by 1986, but the presence of muted live electronics makes it somewhat more palatable. Alec K. Redfearn, who made a record with his band The Eyesores, contributes his distinctive accordion playing. There’s a painting of a friendly goat on the front cover, while inside the band members all wear orange jumpsuits. Yximalloo‘s Unpop (ESP 4047) similarly comes across as sadly a little dated, and is hard to sit through despite his strenuous efforts to inject maximum wackiness and eccentric vocal bleats into his all-electronic and clunky drumbox tapestries. Even the drawings by Jad Fair don’t sweeten the deal for me. 24 short tracks, including a cover of a Donovan song.