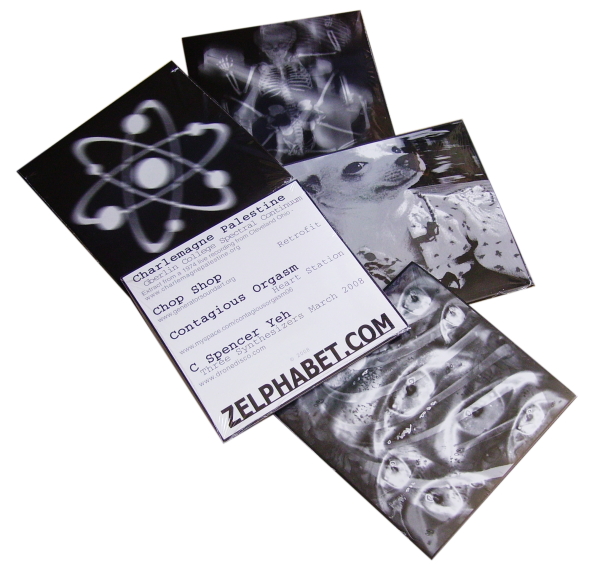 GX Jupitter-Larsen (The Haters, Survival Research Laboratories) started to issue his Zelphabet series around September this year – we received the first five in the series, representing the letters A to E. The idea is that three or four artistes will be allotted around 15-20 mins of space on these hour-long compilations, and Jupitter-Larsen gives ample demonstration that he must own an address book that reads like a Who’s Who of contemporary underground music and sound art – we’ve got numerous impressive names mostly drawn from the worlds of industrial noise and tapework, and some avant-garde performers and minimalists. You are guaranteed a baffling and unsettling hour of listening mayhem and compelling sounds, whichever disc you purchase. A M K are responsible for my favourite on A (which also includes Achim Wollschied, Arcane Device and Asmus Tietchens); the track ‘Flux Owls for Evermore’ is a delirious odyssey of malfunctioning lo-fi tape loops that could probably cause fires to break out in the neighbourhood if left on repeat play. B is a belter of noise and nightmares, what with the eerie meanderings of Bob Bellerue and his ‘Fridge Tower’, further twisted tape loop ugliness from blackhumour, brutal table noise from 16 Bitch Pile-Up and the wild microphone and tape malarkey of The Beast People. On C, we’ve got Chop Shop, Contagious Orgasm and C Spencer Yeh (with an excellent piece of bleeping, throbbing electronic work which he performed using three synths), but also amazingly a rare 1974 tape donated by Charlemagne Palestine extracted from a longer performance called ‘Oberlin College Spectral Continuum’. On the letter D, we have two fairly open-ended long-form droneworks from Damion Romero (who does it with urban field recordings) and Daniel Menche (who does it with abrasive electronic layers), while the absurdist Dave Phillips provides a confusing jumble of unidentifiable noises on his 20-minute ‘Recycling’. Elliot Sharp, Evil Moisture and Emil Beaulieu all appear on the letter E. Beaulieu’s hearty potage of organic and electronic compost is thick enough to get lost inside, but for me Ed Osborn narrowly scoops the prize with his ‘Outfield Derivation’, a subtle and bewildering tape-composition that is rich in baffling detail.

You’ll have noticed from the selection of names above that Jupitter-Larsen is applying a rather – erm – eccentric method to his reading of the alphabet, a lapse which troubles my archivist bones, but one which makes perfect aesthetic sense in this context. So long as he doesn’t apply for an indexing job at the Los Angeles Public Library we should be safe. The cover images in this uniformly-packaged series are stark monotone, and offer a kind of adult version of a Picture Alphabet (A is for Atom, B is for Bone), where the images are all mildly disturbing and may have been treated in Photoshop to add an additional pallid lustre. The back covers use bold and clear typography, often providing zero in the way of contextual detail other than name, title, and website address. With this series, I’m reminded of the Hollis Frampton film Zorns Lemma, which likewise used the progression of the alphabet (obsessively so, in his case) as the structure for its arrangement of disjunctive images. I think releasing a series of compilations like this is a master-stroke, as it will guarantee appeal for some rabid underground collectors who will have no choice but to buy the full set! What’s coming next? “Francisco Lopez, Elliott Sharp, Giancarlo Toniutti, Gregory Whitehead, KK Null, The Legendary Pink Dots, Nocturnal Emissions, Thomas Dimuzio, Zbigniew Karkowski, and Z’EV have all signed on!” we are told.