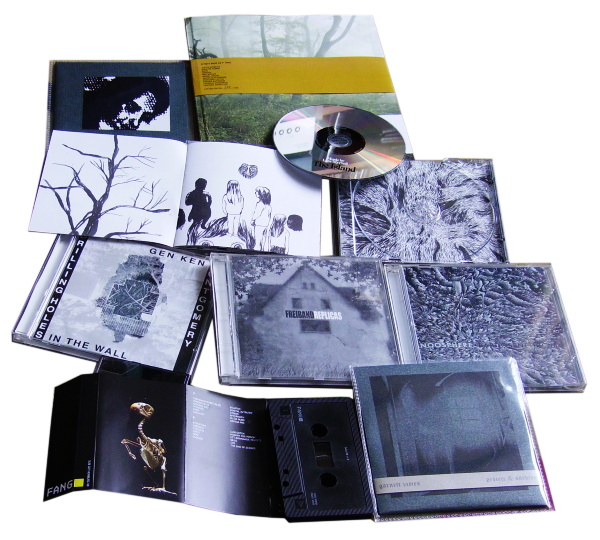 Three electronic ‘tolchoks’ arrived from Russia’s excellent Monochrome Vision label, all released last year in their customary black-and-white covers. From Bardoseneticcube we have the hour-long Noosphere (MV24), a piece deriving from digital reprocessing of information received from outer-space satellites – replete with all the desirable errors of mistranslation that such a process implies. ‘The universe is full of endless and omnipresent information fields,’ declares Igor Potsukailo, and decorates the sleeve of this intensive droner CD with fractal-like images to prove the point. Meanwhile Frans de Waard turns in Replicas (MV19) working under his Freiband alias, and it’s an ultra-minimal collection of tiny bleeping patterns and emptied-out drones derived from the grooves of an old Asmus Tietchens LP. Almost inhuman in its steely purity, yet de Waard is proud to state this is an analogue work. New York artist Gen Ken Montgomery offers a great compilation of process-art soundworks on Drilling Holes in The Wall (MV17), including the long title track which was inspired by the destruction of the Berlin Wall in 1989. Casio keyboards, cassettes, and speaker setups are the main ingredients of these ‘hand-made’ vintage electro-acoustic compositions from 1988-1990, some of them realised in Conrad Schnitzler’s studio in Berlin. Many thanks to Dmitry for sending these.

In the world of handmade small-run CDRs, LF RECORDS sent us a couple items…one of ’em is a new release from the estimable dsic, the Bristol-based electronica fellow who made quite a dent in my listening apparatus with some of his edgy releases of last year. His Ambiences 1 (LF RECORDS 007) was intended to be a quiet and possibly tranquil piece, but wound up the exact opposite – noisy and filled with distressing textures, and fully-armed with track titles that manifest the sort of extreme urban nightmares I’ve somehow come to expect from dsic – ‘Close your eyes (and you will burst into flame)’ being my fave. ‘Probably an excellent soundtrack for paramedics’, admits the press release, in defeat. Micro-edition of 20 copies of this abrasive gem! Garnett James also appears to be from Bristol, leastwise that’s where Protect & Survive (LF RECORDS 006) was recorded in 2003. James is a laptop-merchant enamoured of his Max/MSP software and turns in two long pieces of minimal needling and noodling that might’ve appeared on Mego once in the day. While lacking the immediate punch of the no-prisoners dsic, James has an insistent nagginess in his quiet repetitions that gets under your skin in short order. Handmade edition of 50.

In contrast to above urban grit, we have The Island (SAFE AS MILK SAMCD011), a solo record from Norwegian Lars Myrvoll, whose languid sounds were captured inside his bedroom in 2002-2008. The 12 tracks are intended as some form of concept album, perhaps bolstered by the charming monochrome watercolour pictures in the enclosed booklet, but the underlying story or meaning of it remains delightfully opaque; a sensation that is not dispelled through hearing the music, which is a collection of disconnected acoustic bedroom guitar sessions, recorded in deliberately smeared and slightly distant lo-fi. Some cuts are enhanced with uncertain vocals, flutes, and a little bit of ‘kitchen table experimentalism’, as the label calls it. In places, Lars manages to realise all the fleeting insubstantialness of a dream. To be released in February this year.

If it’s a concept record you want, you can do no better than Séance Vocibus Avium, a collection put together for the Fangbomb label by Wolfgang Müller which intends to ‘recreate the calls of extinct bird species’. The work takes the form of a book with beautiful line drawings of certain extinct birds (made by Müller himself), and a record of sounds created by selected European artists who were assigned the task of reincarnating one bird each. Sounds incredibly fanciful, but the record is beautiful – short and mysterious clips of sound, perhaps concocted through a mixture of field recordings, actual bird calls, and lots of imagination – each one prefaced with a short spoken introduction. As you read the short paragraphs about each vanished member of the avian kingdom, look at the simple drawings and hear the sounds, I guarantee that a teardrop will be glistening in your eye within seconds, as a terrible sense of loss descends on your shoulders. Müller was a founding member of Die Tödliche Doris, whose Fallersleben (VINYL ON DEMAND VOD 7) was an attempt to somehow recreate a lost live performance of theirs through using some sort of time-travel séance-based methods, and struck me as completely preposterous at the time. Yet with this record we do indeed seem to have a method of retrieving lost information from the past, arriving through a time machine a few seconds at a time. Uncanny! Two editions of this – book with a vinyl single (300 copies) or a CD (100 copies).

Fangbomb also sent Sub Gothenburg 08 (FB007), a cassette release (100 copies only) which is a supplement to last year’s excellent Gothenburg 08 compilation which we reviewed with no small enthusiasm in issue 17. Any listeners who were adventurous enough to purchase that terrifying comp are advised to get their hands on this little slab of darkness with despatch – it features names and acts that are so far underground, you need a pick and shovel to loosen their sonic diamonds from the hard Swedish earth. Only had time for a brief delve into this tape, but so far these tape-based experiments in dark, evil drone-noise are every bit as nightmarish and relentless as you could wish for. Featuring Frozen Faces, Smea, Stesolid, Härksen, Thugee, Trepaneringsritualen and more, and track titles like ‘Hungry for Poison’, ‘The End of Science’ and ‘Genital Altruism’ should give you some indication of just how bad things are getting. As the label puts it, ‘you need this to obtain full knowledge’, and there is indeed the suggestion of hidden knowledge and forbidden information buried somewhere within these insistent tape loops and jet-black brews of diabolical sound.