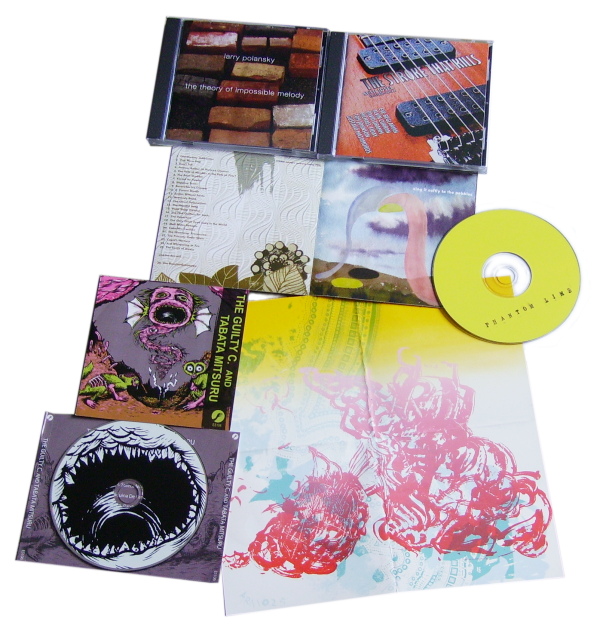 Guitarist Seth Josel whips out his ‘axe’ to perform a number of 20th-century modern compositions on The Stroke That Kills (NEW WORLD RECORDS 80661-2), making sparing use of the delay unit and occasional overdubs to help strengthen the overall attack of his sound. While the album gets off to a slow start with Eve Beglarian’s piece, the remainder is packed with excitement, including most notably three short pieces by the great Alvin Curran. Josel’s rendering of ‘Slapback’ by Michael Fiday is likewise a mesmerising exercise in complex cross-rhythms and rotating patterns of clustered notes. Tom Johnson, notable NYC minimalist composer and critic, is also represented. Some years ago, Sonic Youth came a bit of a cropper when they tried to reinterpret avant-garde compositions through the prism of their rock four-piece setup (Goodbye 20th Century), in spite of their Glenn Branca connections, but Josel’s electric guitar experiments are much more considered, and more successful.

American composer Larry Polansky first came our way on a Pogus CD some 2-3 years ago called DIY Canons, where his Voice Canons compositions were interpreted under the aegis of Simon Wickham-Smith – a record full of overlapping voices and shifting time signatures. Here he is well represented on The Theory of Impossible Melody (NEW WORLD RECORDS 80684-2), a CD which arrives packed with explanatory notes by David Dunn, a glance at which convinces me it’ll take me more than a few moments to comprehend the richness of Polansky’s methods and ideas. On this CD we do hear, along with three further examples of what can be done with the Voice Canons, some fascinating interactions between the voices of Chris Mann and Jody Diamond with the ‘live’ computer-generated computer music of Polansky. The apparently disjunctive effects thus created are pretty startling, but I’m also sure this disjuncture will resolve itself into perfectly-structured musical statements after repeated plays.

Mark Vernon and Barry Burns won my heart years ago with a brilliant, entertaining and humourous LP called The Tune the Old Cow Died Of, a tape-edit masterwork on which they almost reincarnated themselves as many-tentacled mad BBC Radio producers from the fifth dimension. Here’s their welcome return on Sing it Softly to the Pebbles (MEAGRE RESOURCE PRODUCTIONS MERE 024), a complex assemblage of field recordings, sound effects, music and story-telling which they put together with the help of various collaborators, including a writer, an animator, a painter and an inventor of musical instruments. These 26 mostly-short tracks are almost like tiny episodes from a non-existent radio soap opera, a sort of avant-garde version of The Archers. As such, they lend themselves to radio broadcast, and indeed the piece – originally commissioned for a contemporary arts event in Glasgow – was played on Resonance FM last Boxing Day. There is a restrained and very pastoral charm to Sing it Softly, and while I personally found the narrative elements (and the overly-precise speaking voices) a bit cloying, that’s my problem entirely. I do sense that Vernon and Burns have had to rein in their more experimental methods slightly, in order to help the collaborative process succeed. That said, it’s still a work full of much originality, economy, and ellipsis.

I have here the new release from Zanzibar Snails, that off-kilter improvising combo from Texas, which may be called Vanadium Dream (PHANTOM LIMB RECORDINGS ARM 025) – the psychedelic twisty gold-printed lettering is extremely hard to decipher! Here the trio quartet comprise main man Michael Chamy with Mike Maxwell on electronics, Nevada Hill on guitar and bowed cymbals, and Seth Sherman on guitar and vocals. ‘We are presenting a different aspect of the Zanzibar Sound’, explains a note from Chamy. Too true; their last release was a glorious ball of evil, noisy fuzz that was a delicious affront to “good taste” in music everywhere, and of course I enjoyed it immensely. Here the Zanzsters are pulling themselves in and aiming for a much slower, quieter and focused effect; I can practically see them holding and playing their instruments in a rigid, near-paralysed posture, claws frozen around the guitar neck, as they seek the intense concentration required for this iron-willed restraint. Interestingly, the results seem to owe nothing whatsoever to the modernist ultra-minimal school of reduced improv or ‘Onkyo’ as it is sometimes called in Japan; and, if you listen, there is still the sense of implied violence and nihilism lurking in every note of these sullen, depressive scrapes and drones, evidence of the musical personality which the Snails have made all their own. 100 copies only of this CDR; I have unfolded the package in photo above to disclose the inner richness of Nevada Hill’s screen-printed verso.

Lastly here is a Japanese delight from Stéphane Perrin’s Even Stilte Records label in Tokyo. Guilty Connector has been a leading proponent in the international harsh-noise conspiracy, but his latest team-up (ES106) with Tabata Mitsuru – guitarist and bass player in Acid Mothers Temple and many other projects – has resulted in a diverse collection of very pleasing (however wayward) sounds and meticulously composed studio pieces, veering from prog-influenced melodic instrumental workouts, slightly depressing soundscapes, religious drone pieces and complex explorations in textured electronic noise. This is their second collaboration for the label and comes decorated in a lurid sleeve drawing by Dav Guédin, whose hybrid winged sea-serpent was deemed so effective an image that a detail of its many-toothed maw has been used to adorn the disc. All in all an irresistible combination!