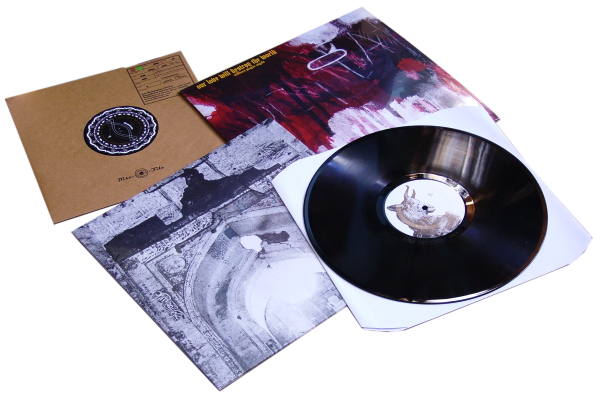 Three new vinyl objects from the German DEKORDER label, whose identity might be emerging as a European equivalent of America’s Last Visible Dog when it comes to showcasing massive drone-works from the international underground. Our Love Will Destroy The World is Campbell Kneale from New Zealand, a country that has been developing its own very distinctive and hazy drone music over many years, and he offers us Stillborn Plague Angels (DEKORDER 030). Through use of many overdubs (I assume), Kneale builds a massively overloaded droning sound where the multiple frequencies collide like swarms of gigantic mosquitoes battling it out with wasps. Sounds of voices blend into bowed cymbals, and other phantom frequencies emerge from the quagmire. With this project’s apocalyptic name, and the allusions to metaphysical time-travel and archaeological explorations within the track titles, Kneale may almost be competing with Nadja in an attempt to provide a suitable soundtrack for the end of the world. His previous project Birchville Cat Motel has been ‘disbanded’, according to the press release, although how a solo project can be disbanded is a paradox you can ponder as you unspool these swirling grooves.

Xela may use similar overdubbing methods for aught I know, but his LP The Illuminated (DEKORDER 031) delivers quite different results. This record is much more brittle and fragile, a construction of such delicacy that even its creator tiptoes around it gingerly, as if he believes it may collapse at any moment like a house of cards. Each guitar note is like a sharp stalactite on which we might scratch our heads as we explore his cavernous inner worlds. In imagery and titles, the record suggests an imaginative take on ancient rites and forgotten ceremonies, with the disembodied voices of hooded priests whispering out of every dark corner. English player John Twells of Type Records is Xela, whose work I only know from a split LP on Barge Recordings; I really must hurry up and buy a copy of The Dead Sea. This fine work was originally released in presumably very small quantities on a cassette by Digitalis Industries.

I have been enchanted by the exceptional music of Washington Phillips for over 25 years, since purchasing the Dutch AGRAM LP which compiled many of his 78 rpm recordings from the 1920s. In the world of blues music and early gospel singing, he stood alone with his simple and direct approach to preaching; no fire and brimstone for him, just compassion and soft-spoken sermons in song, through which he unburdened his soul. All listeners remain amazed by his uncanny musical sound, which he got through playing a fretless zither, producing something like the effect of an old musical box. (For years, many scholars believed it was a hammered dulcimer or dolceola, and that view was promulgated on the sleevenotes to the AGRAM release. For more information, see here). Stephan Mathieu, the German experimenter and sound artist, has decided to pay some form of tribute to this exceptional talent, through his record The Key to the Kingdom (DEKORDER 028). He used an old instrument (an 1890s zither) to do it, playing the strings with e-Bows and adding post-production effects. The very harmonic and tuneful results are by no means unpleasant to the ear, and I have no cause to doubt that Mathieu has been equally moved by the beautiful music of Phillips. But it does seem ironic to me that in purporting to make a statement about ‘the world of raw, early gospel’ (as the press notes have it), Mathieu ends up with something completely lacking in rawness of any sort. Washington Phillips was a true original with a highly distinctive identity, yet this 10-inch LP (cleverly packaged to look like a pastiche of an old 78) is… just another electronica record.