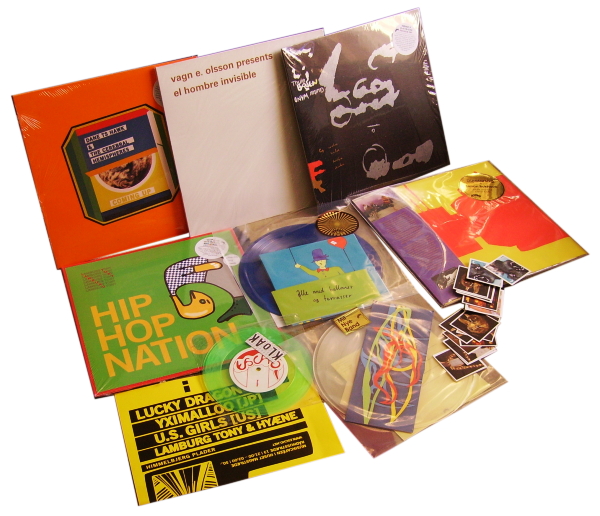 A box of considerable size arrived from the Escho record label in Denmark. In it, a number of limited-pressing vinyl LPs in brightly-coloured and sumptuous packages. The mission of this small independent label is to ‘document moments of spontaneity’ and to ‘offer new, unusual and vibrant sounds from Denmark and beyond’. As far as I can make out, they haven’t quite reached to ‘beyond’ as yet, and what’s more I noticed there is a lot of overlap between the membership of the eight projects and bands represented herein. I have to admit the packaging is remarkable and a lot of care has been taken in this department. Almost of all of these full colour sleeves have unusual flaps and folds, concealed images, double-sided card printing, embossed elements, cover stickers, daring typography layouts, and limitation signatures. Some are pressed in rich coloured vinyl; many have lavish inserts, such as oversize posters printed in dazzling pop-art colours. One has a full-length comic book, printed on high-quality art paper; another has a booklet of loose-leaf notes and drawings inserted. These sizzling visuals all seemed to promise tasty fun and raucous enjoyable noise by the cartload.

Sadly, upon listening I found most of the music disappointing – derivative, unadventurous, and somehow lacking in any sense of identity or clear purpose. But don’t let my opinion put you off investigating some of these unusual releases. On Coming Up (ESCHO 12), Dane TS Hawk and The Cerebral Hemispheres are an all-brass quartet, playing a set of jaunty modernist compositions, which sit somewhere between classical and jazz. Composer TS Høeg is a veteran of Danish culture, active since the 1970s. Düreforsög are a rock band, singing in English and apparently having great fun on Escho Live (ESCHO 5), though they fail at every possible turn to avoid clichéd rock mannerisms unconsciously borrowed from U2, Guns and Roses, etc. The lead singer, Boriz S. also plays a trumpet in this five-piece combo, active since 1994. This release arrives with a wordless comic book by Simon Bukhave; beautifully rendered, it’s a mystical episode of dream-like pastoral weirdness featuring the adventures of a strange entity, apparently a robot made out of wood. This story has a quiet solemnity completely at odds with the relentlessly upbeat live record.

The lead guitarist from Düreforsög, Nis Bysted, has made a solo LP as Thulebasen. His Guitar Wand (ESCHO 13) has its attractions, the means of its production clearly audible through its endearing home-made sound. Guitar, beats and vocals are set forth in many layers, with perhaps a little too much fondness for the overdubbing process. Vagn E. Olsson produces some quite nice instrumental tunes on El Hombre Invisible (ESCHO 7), using drum machines, synths, and a saxophone playing something that isn’t quite jazz over unusual time signatures. Composer Olsson, another late seventies survivor, recruited members of contemporary Danish bands to play these works, and the record is pressed in white vinyl in a white sleeve which conceals a photograph printed inside. Meanwhile, yellow vinyl was used to press Lamburg Tony‘s Hip Hop Nation (ESCHO 11), which turns out to be a very ordinary set of experiments with tape recorders, computers, found sounds and unusual objects. His use of loops is sadly lacking in imagination, and his music becomes irritating in short order. The same sense of aimlessness is to be found on Alle med Balloner og Terrasser (ESCHO 8), a ten-inch artifact pressed in blue vinyl; the duo of Anders Jørgen Mogensen and Andreas Hauer-Jensen produce meandering synth instrumentals with a gated drum kit, and overuse studio reverb to compensate for lack of ideas. Curiously unexciting.

Also here are Mit Nye Band with a clear 10-inch LP (ESCHO 6) which documents a “social experiment” and a green vinyl seven-inch by KloAK of which the A-side is called ‘Boobies’ (ESCHO 9). Sorry that I couldn’t enjoy these records more, but many thanks anyway to Nis for sending this box – along with a charming hand-written note – from Copenhagen. I should add that the purchaser of a vinyl artefact from this label often gets a download voucher in the package, thus securing a digital version of the music to be downloaded from the site. 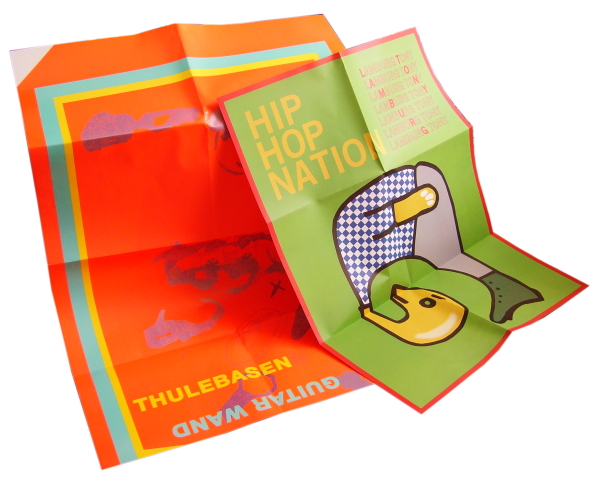