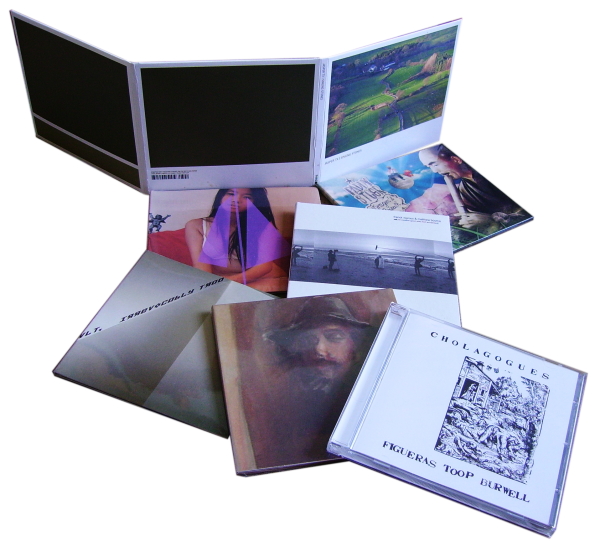 We’ve been receiving some fairly dark and opaque releases from the excellent Fang Bomb label in Sweden these last few weeks…much of it just perfect fodder to feed my brooding soul…but here comes Jasper TX, whose Singing Stones (FB010) is a sunlit, melodic antidote to much of that industrialised gloom. However, Dag Rosenqvist’s musical episodes are also highly melancholic, all that afore-mentioned sunlight tempered with many a rain-streaked window and a tragedian’s bowed head on this beautiful, valedictory record. With its slow instrumental hymns such as ‘This Barren Land’ and ‘Sleeping Rivers’, you could really use this fogged-out record to contemplate the icy stillness of a February Sunday morning and let it act as a balm to salve thy aching heart. Recommended.

Upbeat art-rock instrumental music with a slightly wackoid inclination shall be thy lot should you purchase Dragon’s Breath (RED DEER CLUB RDC 017) by Paddy Steer. He is not the oriental bamboo flute player prominent on the front cover, but may be the trickster-like figure in the background perched on Planet Jupiter with mushrooms by his side and jaunty hat on head. Steer plays lots of programmed percussion, woodwinds, keyboards and stringed instruments with occasional help from Graham Massey and other players; impossible to characterise these lively and pop-coloured toons, with their zany titles such as ‘Cuckoo Feeder Waste Pallet’, but somehow you feel they wouldn’t have been out of place if released on Ralph Records back in the day (when they still pressed vinyl, I mean). Due for release end of March; its Manchester-based creator is also interested in animated film.

Victor Herrero offers us ‘ten songs for Spanish guitar’ on his Anacoreta (BO WEAVIL RECORDINGS WEAVIL 35CD), a set which has the distinction of being recorded live by Anna Tjan of Dancing Wayang Records. There is some fire and spirit somewhere in these flamenco jaunts, but I fear it’s a little too flat and “tasteful” for me; the sort of record you might hear playing at your local arts cinema before they screen Steven Soderbergh’s Che movie.

French player Franck Vigroux offers me more the sort of heavily-intellectualised gritty studio art-noise which always finds favour with me; he made Call Me Madame (Good News From Wonderland) (D’AUTRES CORDES RECORDS d’ac 5002) with Matthew Bourne, the pair of them using synths, keyboards, voice, guitar, turntables and ferocious electro-acoustic processing to create a delicious, fast-edit structure that, through rigorous planning, conveys exciting sensations of utter chaos, a helter-skelter ride to emancipation for your mind. I’ll spare you the umpteenth iteration of my Vigroux-as-film-maker analogy, but must note the front cover which depicts a film crew and sound-boom man at work on a sunlit beach, in the sort of flat monochrome that Jean-Luc Godard would’ve approved of. Any fans of Richard Pinhas must make a beeline for Vigroux; everything I’ve heard from him has been quality work.

Got a couple of CDs, both on the Flux Us label, from Singapore’s premier improv-rock combo, I\D. There is much here to raise the hackles – naff name, nauseating titles, dodgy cover art (Midnight Hot features an oriental courtesan in a series of ‘sexy’ poses, a visual concoction which is one step away from being an avant-garde Smell The Glove), and the band cannot resist name-checking, in press release and in their musical quotes, everyone from Can to Miles Davis by way of Public Image Limited and Lee Perry. Some listeners may want to persevere; I think, once you can get through the pseudo-funky murk of their sound, there may be some fairly trippy jamming on offer. On Midnight Hot, that is; the other CD, called Elite, kVlt, Irrevocably tr00 is their first release and is an indigestible mass of shapeless playing, silly edits, and unpleasant noises, set forth in a series of pretentious and high-flown “suites”.

Cholagogues (SCHOOLMAP CD) is a reissue of a 1977 improvised music record, originally released by Bead Records in the UK. On it, we have important and influential founder members of the London Musicians Collective David Toop and Paul Burwell playing alongside Nestor Figueras. The contribution of Figueras is most intriguing; he is credited with ‘respiratory and vocal sounds’, and something called ‘body percussion’; at one point in this 41-minute continuous piece, he appears to have turned into a human tea-kettle, transfixing the other two players with his body movements and eerie whistling. This is just a wild guess on my part, as said whistling may just as easily be emerging from Toop, who is playing no end of highly unorthodox pipes and flutes on this record with the fixed stare of a determined inventor in his eyes. Burwell’s amazing percussion work, when he gets going, is no less revelatory; you begin to believe he’s some sort of primitive magician, dispensing good medicine for the village as he circles the walls nine times, beating his drum. The whole CD exudes a mysterious, ethnic-flavoured vibe which makes for compelling listening. And an undeniable edginess, too; in 1977, it really seemed like something was at stake and a new musical language stood on the verge of being invented. This meticulous reissue provides all the contextual detail you could wish for about the circumstances of the live recording and embeds it in a certain moment in the history of this strand of marginal culture, which almost appeared to be taking place in secret. Even the original Bead record labels are reproduced; given the rarity of original Bead vinyls these days, we can only be grateful for rescue projects of this quality.