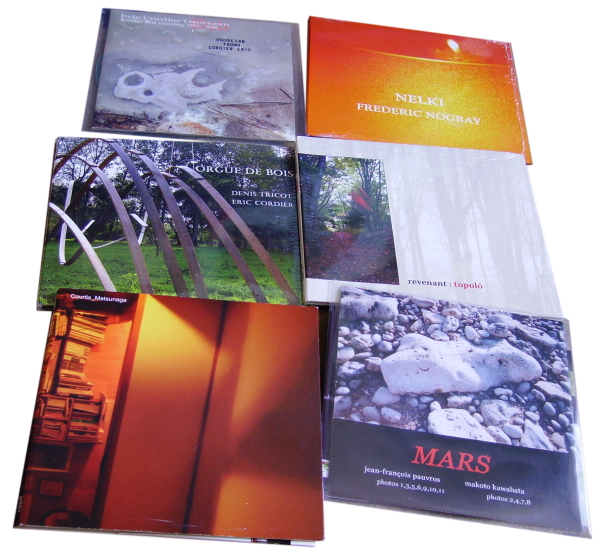 Paris-based electroacoustic musician Eric Cordier was noted in issue 15 for his 2006 CD Breizhiselad, a fine and bewitching record made through sampling and layering old Brittany folk song from 78 records. He wrote to us recently and sent these six items, pretty much the entire catalogue of his own micro label Prêle Records, which takes its name from a prehistoric plant that has continued to survive into modern times. The CD Orgue De Bois (PRELE RECORDS prl 003), with Denis Tricot, offers on-site recordings of enormous wooden constructs, as much sculptures as they are musical instruments; planks of wood assembled into sprawling, arched networks of lines that cover many hundreds of feet and resemble roller-coaster rides as designed by Dr Seuss. The resultant creaking and thumping sounds made when you hammer and wobble the boards can be heard hereon, and though they may not be quite as compelling as the work of Paul Panhuysen with his metal cables or Harry Bertoia with his steel erections, you get the general idea.

Wood-fondling of a different sort can be found on our next release. Revenant are a loose affiliation of field recordists, many of whose names are not unfamiliar to us: Yannick Dauby, John Grzinich, Patrick McGinley, Hiroshi Kojo and Olivier Feraud. Dauby and Grzinich represent the American contingent and I’ve usually associated them with mnortham’s exploits; McGinley, an American based in Europe, produces a regular radio show of field recordings. Topoló (PRELE RECORDS prl 005) is a document in sound, pictures and texts of their exploration of a forest near a small Italian village (it looks as though the five were taking a break from a European symposium in 2006). Where your more traditional field recorders usually just go out and document what’s around them, this adventure seems to have involved direct intervention in the form of shaking, scratching and stroking the trees and twigs; a performance action of sorts, to create organic sound events. The quasi-mystical sleeve notes (each contributor describing their impressions of the events) are a bit hard to follow, but this is a quietly intriguing record of the sort of naturalistic ‘rough magic’ oft practiced by Jeph Jerman.

Jean-François Pauvros and Makoto Kawabata made Mars (PRELE RECORDS prl 002) in 2005, both using bowed electric guitars to produce a CD of slow, quiet and moving music; sometimes nostalgic, sometimes as ominous as a dark-blue sky over a foreign land. The colour photographs within are records of their travels, and suggest they both see the world as a slightly alien place full of strange and inexplicable beauties. The centre-spread is simply an urban town square reflected in a large water-puddle, yet by the simple act of inverting it, a multi-layered metaphysical image worthy of Tarkovsky results.

Frédéric Norgray plays crystal singing bowls on Nelki (PRELE RECORDS prl 004), in a series of recordings engineered by Cordier and located in churches in Normandy. Meditational and minimalist droning is the end result, with a sound that’s so clear and natural it doesn’t appear to have been produced by human hands at all. Possible to align this with La Monte Young or a more extreme version of Terry Riley, but Norgray makes no claims to being a composer; he speaks simply of the pleasure of listening, and creation.

Courtis_Matsunaga (PRELE RECORDS prl 001) is a collaborative work by Anla Courtis and Kouhei Matsunaga, and it’s nine recordings of electro-acoustic experiments from 2004-05 of a bafflingly opaque nature. I think the title track, ‘Amnesia of Amenesia’ says it all; it certainly sets the tone for what follows, sounds which make the listener feel that his memory cells are being systematically wiped clean. Feel free to spend an hour of your life in this isolation tank for the mind. The sleeve photos, depicting odd corners of vacant rooms, contribute enormously to the disorienting effects.

Lastly, we have Osorezan, a compilation of Eric Cordier‘s field recordings made 1993-2006. Each of these seven episodes has clearly been carefully selected from what I assume must be a substantial archive of his travels; he probably has the tape recorder turned on wherever his feet may wander, even when he’s simply buying an airline ticket. The booklet is also part of the document, adding colour photographs which once again express a view of the world as a place filled with unusual beauties concealed in the most unlikely places; and the sleeve notes, which are pithy observations by the artist revealing a sound knowledge of the geophysical state of the globe. It’s even more interesting when these very material documents are overlaid with his own subjective perceptions and insights, including some very personal memories. Even the simplest sounds appear to be enriched with significance.